Intex Challenger K2 vs Explorer K2 - Where are the differences? 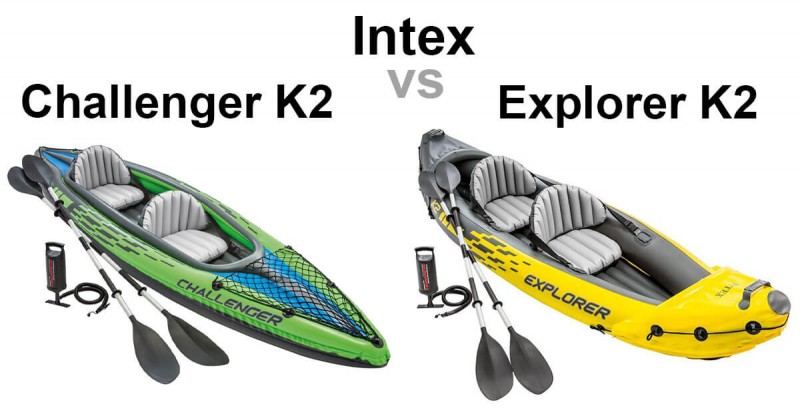 Intex is far ahead in the search for inflatable kayaks and canoes. This is also a good reason, because Intex offers good, but also cheap inflatable boats. The two-seaters (K2) are available in two different versions. These are the Intex Challenger K2 and the Intex Explorer Explorer K2. This leads us to ask which ones we will clarify here.

Let's look at the differences between the two inflatable boats. It quickly becomes clear that some points and factors are similar or the same. Nevertheless, I'll go into the points, because they are worth mentioning and relevant.

Overall, the Explorer K2 is slightly more spacious than the Explorer K2. This can also be seen in the width of the two boats. The Explorer is 91 cm wider than the Challenger, which measures 76 cm in width.

Dimensions of the Intex Challenger K2 and Explorer K2 in comparison The Challenger has a length of 351 cm along the entire length of the boat. The Explorer offers slightly less with 312 cm.

The height of the Challenger K2 is 38 cm. This makes the Explorer K2 slightly higher at 51 cm.

The Challenger K2 has a slightly smaller interior width of 44 cm. The Explorer K2 has a width of 48 cm in the interior. However, the Explorer's side tubes are slightly wider, which affects the space inside the boat.

The seats on both kayaks are identical and attached to the interior with Velcro.

The Challenger K2 is equipped with a canopy at the bow. Luggage can be stowed there safely and dry. The Eplorer has small stowage spaces at the front and rear, but these are extremely small. This gives the Challenger more room for luggage.

The maximum payload is 180 kilograms. Of course, this also includes the passengers. With two strong or heavy men, this can get a bit tight.

The subject of splash protection is of course relevant for kayaks. Here, the Challenger K2 offers something more. The Challenger K2 is equipped with a hood on the bow, which keeps water out of the boat. This is not the case with Explorer K2, which makes it more humid.

The Explorer is also wider, which affects the water resistance. To absorb speed, more force must be applied to displace the water.

Of course, it must be said that inflatable dinghy kayaks can not be as fast as kayaks made of hard material. Among other things, this is due to the stability.

Both the Challenger K2 and the Explorer K2 are equipped with a fin. This is to keep the kayaks in better shape. So go straight. Both have only a single Finn in number.

The Finns fulfill their purpose in both cases and keep the kayaks in the lane. The stronger the waves and the wind, the more the direction has to be corrected.

In build up, the two kayaks do not fool themselves. Both are inflated uncomplicated. Then the seats are mounted in the boats. These are fixed with Velcro in the interior.

When dismantling, however, the Explorer K2 has his nose in front of the Challenger K2. This is due to the accessibility of the interior. Drying the Explorer is much easier. With the Challenger K2 the bug is a small disadvantage, which is an advantage in the storage space and splash guard.

The boats themselves are about to dry. This is not surprising since they are made of the same material.

The reason for an inflatable kayak is also the transport. Therefore, a quick look at this point. The pack size is identical for both kayaks and is 68.5x45.7x28 cm according to the manufacturer. Rounded it can read a little better and we know it from practice. The package will always be slightly larger: 69x46x28 cm.

The accessories of the boats is identical and basically offers a complete package. There are two double paddles and an air pump included. The paddles are with 2.8 meters, however, a bit short and not the most stable. They are also a common criticism. However, it is no problem to buy extra paddles which offer a little more length and stability. The air pump, however, does its job.

In the search you can also find an Intex Challenger K1*. The primary difference is the number of seats. Thus, the K2 is in contrast to the K2 models for a maximum of one person. The Challenger K2 and Explorer K2 can each be controlled by two or one person.

Overall, the Challenger K2 offers a bit more space and comfort. For paddling alone here simply the second seat can be disassembled and the single seat mounted centrally. An important point is the loadability. The Challenger K1 has a maximum payload of 100 kilograms. This must be considered when buying and using. The Intex Challenger K2* can be loaded up to 180 kilograms. Thus this factor can already make the purchase decision.

In contrast to the Challenger, the Intex Explorer is only available for two people, ie as a K2 variant. In the accessories Challenger K1 and K2 do not differ. Both have the identical paddles and are delivered with an air pump.

Which kayak is better for you - Explorer K2 or Challenger K2?

When deciding which dinghy kayak is better for you, we can orientate ourselves a little on the name. Challenger and Explorer. What do these terms translate?

So if you prefer paddling a bit more comfortably, the Intex Explorer K2* is the right choice for you. There you are sitting a bit more open and comfortable. In comparison, the dismantling is easier, which is for the occasional or even leisurely paddling definitely beneficial.

If you want to accelerate and paddle more sporty, then the Intex Challenger K2* is your choice. The model is sportier cut and allows a faster ride. Therefore, it is also equipped with a better splash guard. For taller people, the K2 Challenger is also the better choice as it is simply cut longer. This gives you more legroom in the Challenger K2. The larger size and the more pronounced bow give the Challenger K2 a bit more space for luggage.

Comparison in the video

You can watch the whole synonymous in the video. You can get some impressions of the kayaks here.