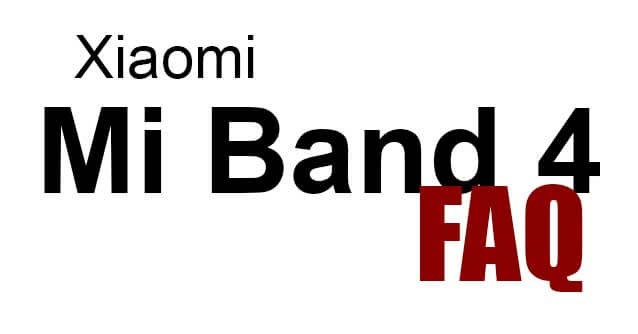 Xiaomi Mi Band 4 and all important answers to the important questions. GPS, waterproof, compatibility. The FAQ gives you clarity.

Does the Mi Band 4 have GPS?

The Mi Band 4 has no built-in GPS. There is the possibility to use connected GPS. You have to connect the fitness tracker to your smartphone. The Fitness Tracker then uses the GPS from your smartphone to track your routes.

This is also known from other manufacturers like Fitbit or Garmin. Especially the small fitness trackers have rarely installed GPS. Exceptions are the Garmin vivosport* and Samsung Gear Fit 2 Pro*.

Is the Mi Band 4 waterproof?

The Mi Band 4 is even suitable for use in swimming lanes. The tracking of swimming has been optimized with the Mi Band 4 from the manufacturer.

Does the Mi Band have 4 NFC?

Yes, the Mi Band 4 has a built-in NFC chip. However, this does not apply to all variants. There are three variants of the Mi Band 4:

The Mi Band 4 version relevant for Germany, Europe and the USA does not have a built-in NFC. However, it makes no sense to buy a Chinese version of the Mi Band 4. Contactless payment and access control are not possible with the Mi Band 4 outside of China.

Yes, the armbands of the two Fitness Trackers are identical and therefore compatible. That's why you'll also find a lot of offers that offer bracelets for the Mi Band 3 and 4 in one.

What are the differences between Mi Band 3 and Mi Band 4?

The answer to the question about the differences is a bit more complex. There is a separate article for the answer: Xiaomi Mi Band 4 and 3 in comparison.

When will Mi Band 4 be released?

The Mi Band 4 has already been released by Xiaomi. The cheap Fitness Tracker has been on the market since June 11, 2019.

Where to buy the Mi Band 4?

The Mi Band 4 is available at Amazon and aliexpress. The more comfortable way is of course via Amazon. The order via aliexpress is also possible with shipping to other countries. So you can also buy from Germany, Europe or the USA.


Mi Band 4 Chinese vs Global Version - Where are the differences?

There is another difference between the versions. The Chinese version has a microphone built in. Also this is only usable in China, because the Mi Band 4 only understands Chinese.

In summary it makes no sense to buy the Chinese version of the Mi Band 4. It has more functions, but these are only usable in China. The normal functions will also work outside of China. I still advise you to buy the global Mi Band 4 version* if you don't live in China.

Of course the list is not complete. Of course I am very happy about additions and suggestions. Just leave me a comment below this article and I will expand the list.

I don't think it will be dangerous. The CE coasts money and the devices must be checked. I think this is the problem. In technique you should not have any differences. Only thing could be the language - But it should be possible to use the chinese band in english as well.
Anmelden und kommentieren