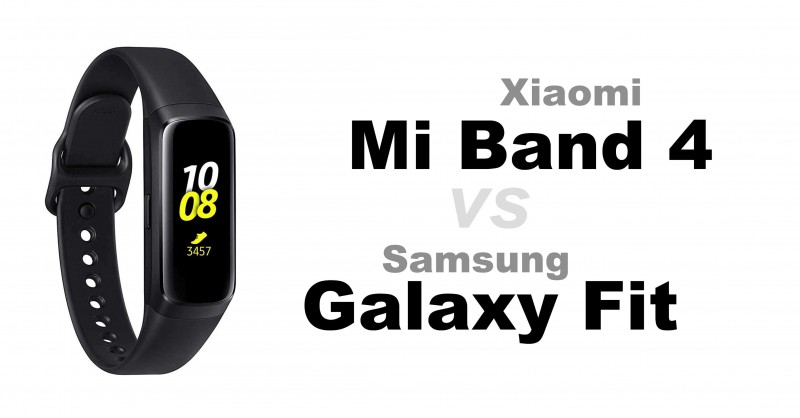 The Samsung Galaxy Fit series and the Xiaomi Mi Band 4 are both from 2019. With the Galaxy Fit e, Samsung has launched an extremely affordable fitness tracker. For a brand like Samsung this is quite unusual. With the smaller device Samsung tried to compete with Xiaomi. But from my point of view it didn't work.

The Samsung Galaxy Fit series requires you to be careful. There are two devices, which are very different in price and function. At market launch, the Galaxy Fit is around 99 euros. The Galaxy Fit e is 39 Euro. It looks the same in performance. The Galaxy Fit e offers much less, as you can read in the comparison between Galaxy Fit and Fit e.

Basically it doesn't make much sense to compare the Mi Band 4 and the smaller Galaxy Fit e from Samsung.

The Mi Band 4 has a much larger color display. The Galaxy Fit e can't handle colors and also has a smaller display. Comparable would be the older Mi Band 3, which also has only a black and white display. This is one of the differences between the Mi Band 3 and Mi Band 4.

Let's compare Samsung's larger Galaxy Fit with the Mi Band 4 and the comparison makes much more sense. Both fitness trackers have a color display. However, the price difference is enormous. The Galaxy Fit goes to the region of 100 euros. The Mi Band 4 from Xiaomi is under 30 euros.

Especially in view of this aspect the Mi Band 4 is in front from my point of view. The Samsung Galaxy Fit has unfortunately no big advantages, which would justify the clearly higher price. The only noteworthy advantage is the connection with the ecosystem of Samsung regarding the Samsung Health App.

In the display, both devices are almost identical. Both have a display size of 0.95 inch. Both also have a color display. Xiaomi could have copied here from the Samsung Galaxy Fit.

Both devices do not have a built-in GPS. None of the fitness trackers can score points here.

Otherwise both devices have a pulse sensor and can measure the heart rate. In addition, both Fitness Trackers have an accelerometer.

Both the Mi Band 4 and the Samsung Galaxy Fit are waterproof. Both fitness trackers are also suitable for swimming. There is no difference. The Galaxy Fit e is also waterproof.

However, Xiaomi's device is clearly ahead in terms of battery life. The Mi Band has always been known for a very long battery life. The same applies to the Mi Band 4, where the battery life is around 20 days. The Samsung Galaxy Fit is only advertised with up to 7 days. In practice, the performance is even lower.

I think it's quite clear that I wouldn't recommend the Samsung Galaxy Fit* or the Galaxy Fit e*.

If the price below 50 Euro is important to you, the Mi Band 4* should be your choice. Especially when it comes to price, the Xiaomi Fitness Tracker offers much more than both Samsung Galaxy Fit machines.

If you want a Fitness Tracker in the price segment between 90 and 150 Euro, I recommend a Fitbit. Especially the Fitbit Charge 3* and Fitbit Inspire HR* can be interesting for you. The Inspire HR is a bit cheaper in price and not much more trimmed in function. You can see the exact differences in the comparison between Fitbit Inspire HR and Charge 3. If you like it uncomplicated and simple, Fitbit is the better choice compared to Xiaomi.

Tags: VersusProduktvergleich, Fitnesstracker, SamsungGalaxyFit, MiBand, MiBand4 The article is written by Lucas B and published on 17.06.2019.