Swimming with Fitbit Charge 3 and Versa - That's how it looks! 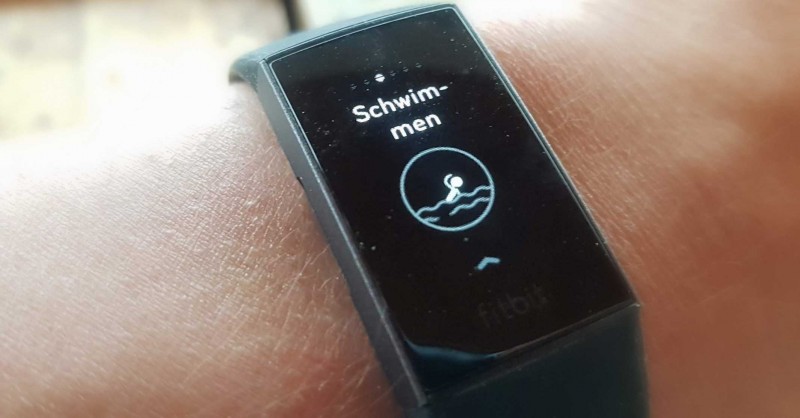 Since 2019, Fitbit has finally had two popular devices in its range, which are waterproof and suitable for swimming. It's about the Fitbit Charge 3 and the Fitbit Versa. In this article I give you an insight into how well swimming with Fitbit works and how it looks like.

I own the Fitbit Charge 3 and am glad that I don't have to take it off while swimming. That is one of the differences between Fitbit Charge 2 and 3. Also it was one reasons for the change from Charge 2 to Charge 3. The Versa behaves identically in swim mode, which is why the content also applies to the larger model.

Can Fitbit count the tracks?

Yes, the Fitbit Charge 3 and the Versa can count the lanes while swimming. The length of the lanes is set at the start of the training. This is possible from 10 to 100 meters. Within this range you can work in steps of 1 meter.

The track is not recorded by GPS. This is also not possible because both devices do not have build in GPS. Both the Charge 3 and the Versa have only connected GPS. The GPS of the Smartphone is used. Usually you don't have this in your pocket in the swimming pool. This would also be possible with most smartphones. Most mobile phones, like the Fitbit devices, are rated 5 ATM.

In the open water, the counting of tracks becomes a bit difficult. I suppose, however, that this will be clear to you. In the sea or in lakes there are rarely marked holes.

The counting of the lanes also worked very well for me. There was a deviation from one lane. I swam 60 lanes in my unit, but 61 were recorded in the app. However, this could also be due to the start and end of the training.

Training started, track length adjusted and swum. The result can be seen later in the app. On the clock the result of the courses is unfortunately not visible. Therefore the Fitbit App has to be opened. What this looks like I will show later.

Control the Fitbit while swimming

During swimming the display of the Fitbit Tracker is locked. You can only see the duration and time.

Unfortunately, the number of current lanes is not visible. Maybe Fitbit will improve it in the future. This would be possible because it is only software.

I think the operation in the water is limited, because the display is more difficult to control with humidity. The problem isn't just with Fitbit, it's a general issue. What the Fitbit devices can do in floating mode works without any problems.

Statistics of swimming sessions at Fitbit

As with the other training sessions, Fitbit will give you some more information about the swim unit, such as calories burned, duration and load. Especially for hobby swimmers a really nice thing.

The statistics contain the following values:

The screenshots on the following picture are taken from the German Android App. The Fitbit App doesn't look much different on iOS and Windows. A point I also appreciate about Fitbit, by the way.

Swimming session with Fitbit in the Android App The next picture shows the identical swimming session as a screenshot of the German Fitbit App on Windows 10. The app for Windows is really good and works without any problems. This is not the case with many apps for Microsoft's operating system. From the data point of view you can't see more or less as with the Android app.

Swimming session with Fitbit in the app for Windows 10 Who expects extreme statistics is also better served here with Garmin. This is not only true for swimming, but also for running and other sports. Garmin is more complicated, but offers more statistics. Personally, I prefer the simple version.

How long can I swim with the Fitbit?

There is no time limit from the manufacturer. The Fitbit Charge 3 and the Versa are both rated 5 ATM. This makes the Fitness Trackers waterproof up to 50 meters. So it only limits the depth and not the time.

Therefore Fitbit Charge 3 and Versa are not suitable for deep diving. Whereby 50 meters already exceeds the depth of most simple diving licenses. My diving license is valid up to only 20 meters. However, Fitbit is also rather uninteresting for diving. In this case a special dive computer is much more useful and definitely more appropriate.

Can you swim in the sea with Fitbit?

Especially on vacation there is the big question if Fitbit can be used in the sea, i.e. in salt water. The answer from Fitbit itself is "yes". You can also wear and use your Fitbit Charge 3 or your Fitbit Versa in the sea.

As an indication, the manufacturer states that the fitness trackers should be dried and cleaned after use in salt water. This is probably to prevent salt crusts and damage.

With which Fitbit can you swim?

Any Fitbit that is waterproof can also be worn while swimming.