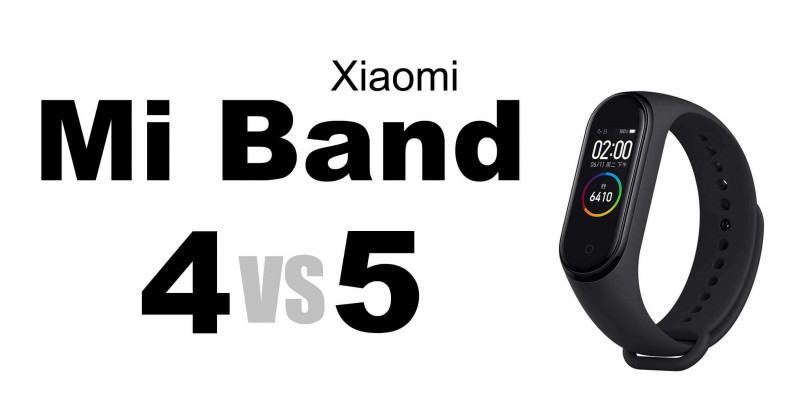 After Mi Band 4, Xiaomi brings Mi Band 5, with July 5, 2020 as the global date. Interesting are of course the differences between Mi Band 4 and the new generation. Overall, these are quite small and limited to a few points. Let's take a look at the two fitness trackers in detail and compare them.

Differences between Mi Band 4 and 5

The display has grown minimally on the Mi Band 5. It now measures 1.1 inch instead of 0.95 inch, like its predecessor. This makes the display 15% larger.

However, the device itself has not grown in size. The Mi Band 4 has in comparison more unused space, which is omitted with the 5th generation.

Due to the larger display, some screen contents are easier to read.

The battery has always been the highlight of the Mi Band. Even the predecessors had an incredible battery life of up to 20 days. This also remains unchanged with Mi Band 5. Thus both Fitness Trackers have a battery capacity of 125 mAh.

It becomes more exciting with the method of charging. Because with the Mi Band 5 the arm band does not have to be disassembled. This was still the case with Mi Band 4*.

Now the Fitness Tracker can be charged via a magnetic charging cable on the back. However, this is not wireless (inductive) charging. Many people will be familiar with the way other well-known fitness trackers, such as Fitbit, charge.

NFC for the whole world

The Mi Band 4 had also already installed NFC. This allows you to pay with the Mi Band 4. Access controls can also be controlled via Mi Band 4. However, the whole thing only applies to Asia.

This is now changing with Mi Band 5, which got NFC for the whole world. The Mi Band 5 can be used with Google Pay.

A dream for the Mi Band 5 would have been a built-in GPS. But Xiaomi did not give this to Mi Band 5.

I think this will come in the next generation, as even the small fitness tracker Fitbit Charge 4* is equipped with GPS. One of the differences between the Fitbit Charge 3 and 4.

So the Mi Band 5 continues to work with Connected GPS. The GPS of the Smartphone is used. Consequently, the smartphone must be nearby for this.

In terms of hardware, Mi Band 5 offers an altimeter (barometer).

Apart from that, the hardware is identical to Mi Band 4, the memory is still 16 MB and the Fitness Tracker comes with 511 KB RAM. The manufacturer also continues to rely on Bluetooth 5.0 for the Mi Band 5.

The Mi Band 4 was also waterproof, both are waterproof up to 50 meters.

With the extent of the functions we find again a few differences. All in all, Mi Band 5 offers a little more.

In the list, it works a lot. In reality, these are not a few functions either. If you know something about the subject you will find some parallels to Fitbit. After the functions, Mi Band 5 sounds a bit like a modified Fitbit Charge 3.

However, most of the features are not fundamental to the use of a Fitness Tracker. I would classify all functions as a bonus.

Which Mi Band is better?

From a purely factual point of view, Mi Band 5 is the better fitness tracker. You will get a bigger display and the possibility to pay contactless. The charging process has also been optimised.

Looking at the features, Mi Band 5 gives you a few handy bonus features.

In my opinion, it depends a bit on the price and of course your budget. Furthermore you are well served with the Mi Band 4* as a low-budget fitness tracker.

For a small extra charge you get with the Mi Band 5 a few (not elementary necessary) additional functions. Because the surcharge for the Mi Band 5 is relatively small, I recommend to choose the Mi Band 5 when buying a new one. I do not consider a change to be necessary.
Tags: ProduktvergleichVS, MiBand, Xiaomi The article is written by Lucas B and published on 20.01.2020. The last update was on 18.06.2020.