Fitbit Versa Lite vs Inspire HR - which is better? 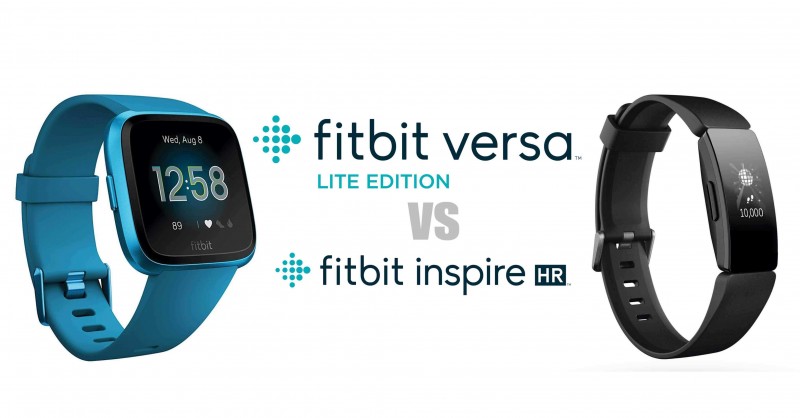 If we look at the differences between the Fitbit Versa Lite and the Fitbit Inspire HR, we see a lot in common. Primarily the Versa Lite differs in the display and possibility to install apps.

It is obvious. The Fitbit Versa is significantly larger than the Inspire HR. Of course, the clock is a bit bigger for you.

In addition, the Fitbit Versa Lite also has a color display. This also colored dials are possible.

In that point, of course, it's also a matter of taste. Better a slightly larger clock or a small, inconspicuous fitness tracker.

Overall, the Fitbit Versa Lite is a bit smarter than the Inspire HR. In the overall view, however, quite limited.

Versa lets you install third-party apps and also use the Quick Answers feature. Also called Quick Replies by Fitbit. However, notifications on calls, messages and appointments are also available on the Inspire HR.

You will not get a music memory like the Versa with the Versa Lite. Of course not with the Inspire HR.

Of course, the battery life depends on the usage. If the training mode is activated frequently, the battery life will decrease. The GPS connection can also cost more battery. As a guideline, however, the information should be used well.

Let's take a look at interesting features that are not self-evident, but offered by both fitness trackers.

Interesting is the counting of floors. Neither the Versa Lite nor the Inspire HR can count floors. Personally, this feature is not very important. Noteworthy is the factor in each case. Counting the floors is one of the differences between the Versa and Versa Lite.

If you want a fitness tracker that counts floors, the Versa Lite and the Inspire HR are out of the question.

At this point, I would like to point out again that we are talking about the Inspire HR. The short addition HR has a big impact. Because only the Inspire HR has a pulse measurement. The Inspire is not.

The Versa Lite, however, also has a pulse measurement. Thus, both are equal and do a good job here.

Both Versa Lite and Inspire HR have connected GPS. So the possibility to use the GPS signal of the smartphone. The active connection with the smartphone must be established.

There is no built-in GPS for both. Incidentally, that's not the case with Versa in the larger version. At the moment only the Fitbit Ionic has got a built-in GPS, as well as our Fitbit GPS overview.

Both Fitbit devices can be used in the water. The Fitbit Versa and the Fitbit Inspire HR can withstand water up to 50 meters. Thus, the fitness trackers are both suitable for swimming and showers. Which Fitbit is waterworthy you can find in the Overview of the waterproof Fitbit tracker.

The Fitbit Pay payment system for contactless payment via the Fitness Tracker itself is not available on the Versa Lite or the Inspire HR. For this you have to grab the Fitbit Versa Special Edition or the Fitbit Charge 3 in the Special Edition. The use of Fitbit Pay, however, is only slightly limited.

Versa Lite or Inspire HR - Which Fitbit is better?

However, the Inspire HR* makes a much better picture in its category compared to the Versa Lite. Even in the comparison between Fitbit Charge 3 and Inspire HR the small fitness tracker cuts a fine figure. It's a cheap and good alternative to the next bigger Charge 3. I personally prefer the smaller fitness trackers and carry the Charge 3. More about that I have written in my review for Charge 3.

However, if we look at Versa Lite compared to Versa, the little smartwatch will fare worse. In terms of price, Versa Lite* is only slightly lower than the Versa. If you want a larger clock, I recommend the Fitbit Versa*.
Unsere Bewertungskriterien
Tags: Fitnesstracker, VersusProduktvergleich, FitbitVergleich, FitbitVersa, FitbitInspire The article is written by Lucas B and published on 19.03.2019.