Polar Ignite vs Polar Vantage M - Where are the differences? 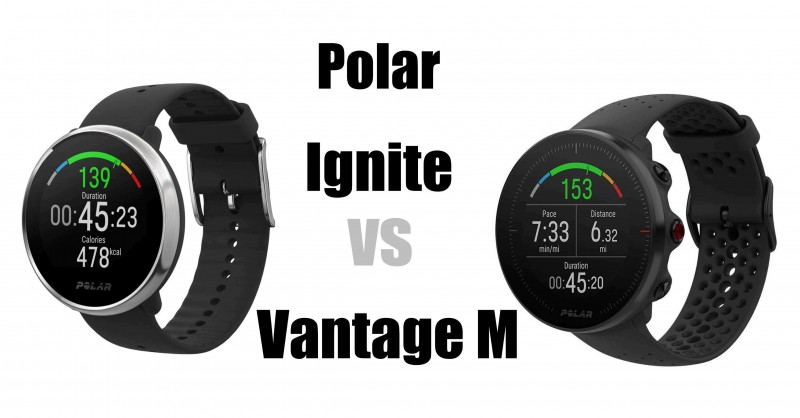 The Polar Ignite and the Polar Vantage M both cost almost the same. All the more the question arises where the two fitness watches differ. In this context, of course, which of the two is better for you.

The Polar Ignite should be the affordable model from Polar for under 200 euros. That also happened. The price difference to the Polar Vantage M is quite small. The price is also under 250 Euro.

Roughly speaking, the Polar Ignite is optimized for runners and athletes in the gym. The Polar Vantage M is more made for triathletes. So it is already clear here that the Vantage M is the bigger model of the two and can do more. But let's take a closer look at the differences in detail.

The two watches hardly differ in size. However, the operation is different. With the Polar Ignite you get a touch screen. On the Polar Vantage M the clock is controlled by buttons.

In sports, operation via buttons can be much more pleasant. Sweat often leads to minor problems with touchscreens. Buttons are also much more practical than touch controls when used in water.

In terms of battery life, the slightly more expensive Polar Vantage M is more convincing. The watch lasts up to 30 hours with the GPS switched on. With the cheaper Polar Ignite it's only 17 hours, which is almost half.

Here Polar uses the recorded readings. This includes sleep analysis, resting pulse and recovery values. From these data Polar creates suggestions for your training and provides you with training plans. Polar uses the measured values to optimize your fitness level and take your regeneration into account. A very good thing for people who like to be given a plan.

At the Polar Vantage M there are a few more special features. These include open water swimming, triathlon mode and additional running functions.

The triathlon mode allows you to quickly switch between swimming, running and cycling.

For running units, the Vantage M can also record the distance and exact speed. This is not possible with the Polar Ignite.

Both devices also have a lot in common, which I would like to briefly discuss.

With both Polar watches you get a 24/7 pulse measurement directly over your wrist. But you don't have ANT+ with both watches. Neither of them has a barometric altimeter.

The watches are both equipped with a built-in GPS module. This allows you to record distances directly via the clock, without a smartphone.

Which polar is better?

Let's come to the exciting question which of the two Polar watches is better. Polar Ignite or Polar Vantage M?

Basically the Polar Ignite is the smaller watch of the two. However, the difference in price is very small. In my opinion you are better served with the Polar Vantage M*. The additional functions are also quite special. If the triathlon is your world, then you should definitely go for Vantage M*.

If you want a touch screen instead of buttons, the Ignite* is your choice. There you get guided training, but you don't need some other functions like open water swimming. You also get a slightly worse battery life.

If you're willing to invest a little more money, you should check out the Polar Vantage V*. You'll also get a touch screen and a few more features than the Ignite and Vantage M. You can look at the comparison between Polar Vantage M and Polar Vantage V.