Xiaomi Mi Band 4 vs Honor Band 5 - Which is better? 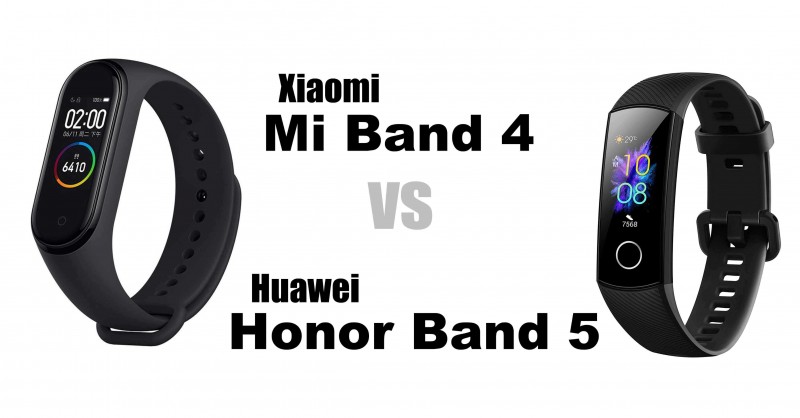 Shortly after the Mi Band 4 of Xiaomi the Honor Band 5 was released. The Fitness Tracker is supposed to be a competition to the new Mi Band. But is it? Where are the differences and which device is better? Let's compare the two models and decide which one is better for you.

Probably the biggest difference between the Mi Band 4 and the Honor Band 5 is the SpO2 sensor. It can be used to measure the oxygen content in the blood and thus the physical load. A thing that even Fitbit has long problems with.

Both fitness trackers are waterproof up to 50 meters with 5ATM. This also makes both machines suitable for swimming.

But here the Honor Band 5 trumps a bit. It is a bit better optimized for swimming units. The Honor Band 5 measures the SWOLF Index, a value that is interesting for the evaluation of a swimming unit. This is otherwise only known from expensive Garmin fitness trackers. However, it will certainly work a little better there.

If you are a swimmer, then the Honor Band 5 gives you a little added value.

In the battery life the Mi Band 4 still does the running. There the battery lasts about 20 days. Of course it depends on usage and load. The Honor Band 5 offers only 14 days. This was already the case with the predecessor.

So both devices are the same. In spite of the same display, the devices appear somewhat different because they are built in differently. Here, of course, it's the personal taste that counts.

Optically the Honor Band 5 goes a bit more in the direction of most fitness trackers. The Mi Band 4 stands out from most other devices due to its design.

The weight of both machines is almost identical with about 23 and 22 grams. In any case, the difference is not worth mentioning.

Both fitness trackers have NFC, but in Europe and the USA this is not useful. The payment system there is AliPay, which can only be used in China. Thus this point is out of the question for most of us. Also access controls over NFC are usable only in China and with us so or so hardly present.

In both cases we have low-budget fitness trackers. For the price both offer very good performance.

The differences between Mi Band 4 and Honor Band 5 are very small and are basically limited to 4 points:

The Mi Band 4 is even cheaper. If you don't swim much and don't care about the SpO2 sensor, the Mi Band 4* is the right choice for you. If the features are important to you, the Honor Band 5* is your choice. But there you have to pay a little more.

Unsere Bewertungskriterien
Tags: ProduktvergleichVS, FitnessTracker, MiBand, HonorBand The article is written by Lucas B and published on 26.07.2019.