Samsung Galaxy Fit vs Fitbit Insire HR - Which is better? 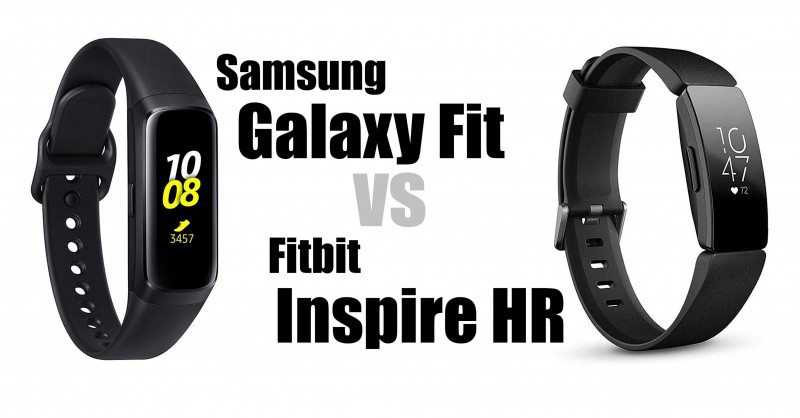 For comparison purposes, it is important to know that there are two devices of the respective series from both manufacturers. The differences between the Samsung Galaxy Fit and Galaxy Fit e are primarily in the size and the color display.

At Fitbit, the differences between the Inspire and Inspire HR are much more important. The Fitness Tracker without HR does not support heart rate measurement. So the device is basically completely uninteresting. Here you should not be fooled by the significantly lower price.

This comparison is about the Fitbit Inspire HR (with heart rate monitor) and the Samsung Galaxy Fit (larger model with color display).

In the display we see the first big difference between the two fitness trackers. The Fitbit Inspire HR only has a colorless display. The Galaxy Fit from Samsung, on the other hand, has a color display.

On the other hand, the Fitbit display is slightly larger at 1.4 inch. Samsung offers only 0.95 inch. A size that some manufacturers choose at this time.

Visually, the Fitbit Inspire HR looks a bit rounder and more artistic. The Galaxy Fit comes much closer to a classic fitness tracker. What you like better, however, is a question of taste.

Both Fitness Trackers have an HR sensor and can record your heart rate. This is definitely necessary for the sensible use of a fitness tracker. I remember the Fitbit Inspire without HR, which is cheaper but can't record your pulse. The smaller Galaxy Fit e can also measure the pulse.

Both of them don't deceive themselves about the technology of measuring directly on the wrist. You can hardly ever connect a pulse belt to the small devices. This is also the case with the Fitbit Inspire HR and the Galaxy Fit.

In terms of battery life, the Samsung Galaxy Fit is ahead with up to 7 days. This is a bit surprising as the Fitness Tracker has a colour display unlike the Fitbit Inspire HR. This should consume more battery power. But the device has a bigger battery. The Fitbit Inspire HR has a battery life of up to 5 days.

With 5 ATM, both fitness trackers are waterproof up to 50 meters. Both the Fitbit Inspire HR and the Samsung Galaxy Fit can be worn for swimming. Both swimming units can also record.

Overall, both Fitness Trackers are very similar. Neither tracker has a superior performance, but is sufficient for normal use. On the other hand, the machines are much more interesting in terms of price than other models.

All in all I recommend Fitbit, because the manufacturer can trump with a very nice app and a lot of experience. Motivation and suggestions come out much better with Fitbit. In addition, the Fitbit Inspire HR* gives you a slightly larger display.

If you want a colored display, you have to choose the Samsung Galaxy Fit*. If you have a Samsung smartphone, you'll like a few things here.

If you are willing to spend a bit more money, I definitely recommend the Fitbit Charge 3*, which I also wear. You should check out the differences between the Fitbit Charge 3 and Inspire HR.
Unsere Bewertungskriterien
Tags: ProduktvergleichVS, FitnessTracker, Fitbit, Samsung The article is written by Lucas B and published on 24.08.2019.