Garmin vivoactive 4 vs Forerunner 245 - Which is better? 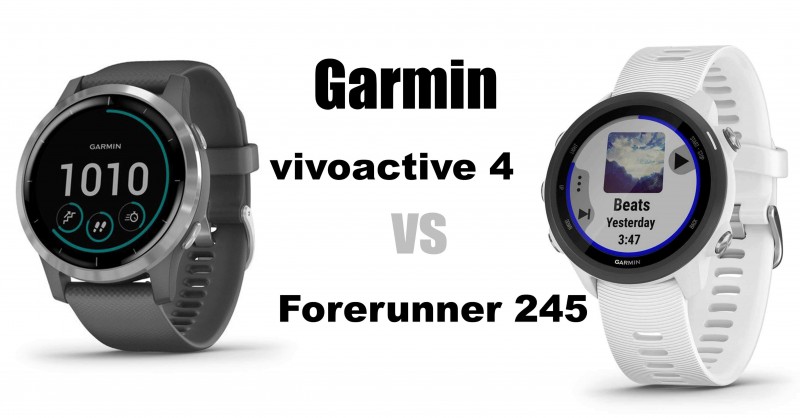 Both the Garmin vivoactive 4 and the Garmin Forerunner 245 Music are very powerful GPS sports watches. Both models also have a lot in common. However, there are also differences. Let's take a look at them and decide which Garmin is better for you. If you don't feel like writing a lot of text, go straight to my recommendation.

Differences between Garmin vivoactive 4 and Forerunner 245

The decisive factor for the comparison is that we are talking about the Forerunner 245 Music. There is also the version without music. It has no built-in memory for music, which also makes the difference. Both the vivoactive 4s and 4s have music on board. This is a difference to the vivoactive 3, which is also available as a variant with music.

Good and very important information in advance: Both clocks have almost the same sensors installed. Both watches are equipped with GPS, GLONASS and Galileo. Thus they can record independently from the mobile phone.

In contrast to the Forerunner 245, the vivoactive has an integrated altimeter. This is also the reason why the FR245 cannot record floors.

Both devices still have it:

Both watches have a Corning Gorilla Glass 3 built in, but differ in the display size. There is also a decisive difference in the touch screen. Only the vivoactive series has it. The Forerunner is completely controlled by buttons.

The differences in size and weight are not enormous, however existent. Of course the vivoactive 4s and 4s also differ.

The battery life of the vivoactive 4 and Forerunner 245 Music is very similar.

In the training mode we find serious differences. As mentioned at the beginning, the Forerunner is much better optimized for runners. With the FR245 Garmin offers you the possibility to record your runs better and to evaluate them much better. The vivoacative 4 only offers the basic functions for runners. For many of the functions, however, the Forerunner 245 also requires additional equipment.

The vivoactive 4 trumps in other types of training. That would be:

Both watches are water resistant with 5 ATM and also suitable for swimming. The FR245 does not measure the pulse.

Which Garmin is better for you?

However, if you do more than one sport and are on the move with more variety, then the Garmin vivoactive 4 is your choice. Whether you prefer vivoactive 4s## does not matter for the function. Only the size and battery life differ.

Tags: ProduktvergleichVS, Fitnesstracker, Garmin The article is written by Lucas B and published on 06.09.2019.