buffcoach.net
buffcoach.net
Anmelden
Magazin » Test & Vergleich » Garmin Fenix 5 Plus vs Fenix 6 - Where are the differences?

Garmin Fenix 5 Plus vs Fenix 6 - Where are the differences? 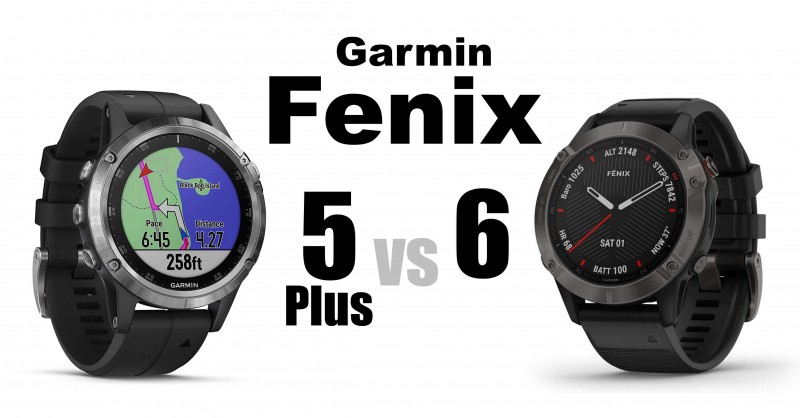 Differences between Garmin Fenix 5 and 6

The Garmin Fenix 6 can still do everything that the Garmin Fenix 5 already could. However, the design has changed a bit and some more functions have been added.

In general, the Garmin Fenix series different variations. This applies to the 6th as well as the 5th generation of the Fenix. There is a difference in size and features. The size becomes clear by the letters on the version number - Fenix 6S / 6 / 6X. The features can be recognised by the Pro or Basic version. To understand this better, take a look at the differences between the Garmin Fenix 6 variants.

With the Fenix 5 Plus series, all three variants (5S/5/5X) have the same diameter in the display of 1.2 inches. Also the resolution is the same for all versions.

The Fenix 6 series is different. The bigger the model, the bigger the display. The resolution also increases.

With the Fenix 6 series, Garmin has improved the battery life. All sizes offer a little more in comparison to their predecessors.

Special functions of the Fenix 6 series are the Saver Mode and the power management. In Saver Mode all functions (GPS, music, pulse measurement ...) are switched off. This of course extends the battery life enormously. In addition, the Fenix 6 offers the option of energy management. You can freely choose which functions should be switched on or off. Thus you can arrange your battery life very flexibly. How long the clock will last is also displayed in a concrete number. Extremely advantageous in practice.

With the Fenix 6 series there is another big special feature. This is the Fenix 6X Pro Solar*. Here a special display is installed, which can charge the clock by solar energy. This does not replace the charging process, but extends the battery life enormously. However, this is only available with the 6X, the largest version of the Fenix. If this function is well accepted, Garmin will surely equip all versions of the Fenix 7 with solar at the latest.

Both versions can store music on the device and also use streaming services (i.e. Deezer, Spotify ...).

Music can only be found in the Pro version of both generations. In the storage Fenix 5 and 6 differ here. The Fenix 6 offers 32 GB storage for all Pro versions. According to Garmin this is enough for up to 2000 songs. With the Fenix 5 Plus we have only 16 GB and up to 1000 songs. That's only half.

Both generations have installed GPS, GLONASS and Galileo. The Fenix 6, however, has an optimized GPS on board, which should provide a more accurate recording. Especially for use in areas with poor GPS reception and when swimming free, this should be the case. However, GPS is not a problem with the Fenix 5 Plus series.

With the Garmin Fenix 6 series comes the Pulse Ox Sensor. This can measure the oxygen content and thus provide more accurate records of your values. This is especially interesting for sleep. The Fenix 5 Plus series does not offer this.

Of course, the Garmin Fenix 5 Plus already has an optical pulse sensor and permanently measures the pulse when it is switched on. However, the Fenix 6 has been upgraded in hardware. There the new Garmin Elevate is installed in the third version.

Furthermore, all Fenix models remain waterproof with 10 ATM. One difference is the measurement of the heart rate under water. With the Fenix 5 the sensor in the water switches itself off. The reliability in the water is of course always a small problem, because water between clock and arm can falsify the values easily.

There are a few more features that the Fenix 6 series has received as upgrades. At the end of the list you'll also find the items I've covered before:


Is it worth upgrading from Fenix 5 Plus to Fenix 6?

The amount of functions is not huge, but there are already some available. Especially optimized power management is a big advantage to be able to use the Fenix 6 better and longer. In addition, the battery life of the Fenix 6 has already been significantly improved. There is also a Fenix 6X Pro Solar*. With this model the battery life can be extended by solar energy. However, this is only available in the largest size (6X) and relatively expensive in price.

Garmin PacePro is also a very nice function to make the training even better. Especially good is the upgrade of the heart rate monitor, which is now also activated under water. This is of course primarily relevant if you also go swimming.

Many of the innovations, such as ski maps and the new golf functions are very special and worth an upgrade to the Fenix 6 series for very few.

The improved hardware in the optical pulse sensor as well as the GPS is definitely good, but we have to keep an eye on the price. In addition to the new sensors, the Fenix 6 also gives you twice the storage space.

The decision if an upgrade is necessary doesn't make it easy. If you are short of cash, you should probably refrain from doing so. Otherwise you'll already get some nice features and a more stylish design compared to the Fenix 5 Plus.

New purchase: Fenix 5 Plus or Fenix 6?

If you do not own a Fenix, the question naturally arises which Fenix generation is better for you. Here, too, as with the upgrade topic, something depends on your budget.

The Fenix 6 series is of course more expensive. In other words, with the Garmin Fenix 5 Plus Series* you're making a damn good buy. You'll save money. Take a look at the list above and decide if the Fenix 6* new features are relevant to you. Otherwise you are very well served with the Fenix 5 Plus*.

Tags: ProduktvergleichVS, Fitnesstracker, Garmin, Fenix The article is written by Lucas B and published on 10.09.2019.