Apple Watch Series 4 vs 5 - Where are the differences? 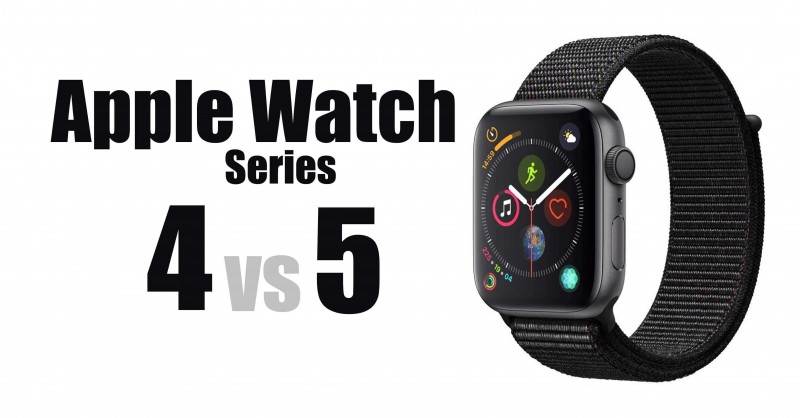 Differences between Apple Watch 4 and 5

At first glance, the watches are hardly distinguishable. The Apple Watch 4 and 5 look very similar. However, Apple has not yet commented on the concrete dimensions. In terms of design, however, it is assumed that there are not much differences. However, there will be considerably more colours and also other materials to choose from. It looks somewhat different with the functions of the 5th generation.

The wristbands are interchangeable for both generations of Apple Watch. Also the dimension is identical here with 13 to 20 millimeters.

The Apple Watch Series 5 has a Retina Always-On display. A thing that many have long wished for. This means that the display does not switch itself off and the important information can also be read without a second hand. This is probably also the biggest difference to the older generation. In this train Apple doesn't use an OLED display anymore, but a LTPO display. The resolution remains identical with 368 x 448 pixels for the 44 mm version and 324 x 394 pixels for the 40 mm version.

Even though Apple is banking on a better display, the Always-On display doesn't have a positive effect on battery life. Furthermore, the Apple Watch Series 5, like the Series 4, only has 18 hours battery life. Very depressing for a Smartwatch and a general problem of the Apple Watch Series for a long time. Both generations can be charged wirelessly.

The emergency call (SOS function) has moved into the focus of many manufacturers. Apple is also following suit. With the LTE version of the Apple Watch Series 5 there is the possibility to trigger automatic emergency calls when the ECG monitor hits Smartwatch. This is also possible with LTE without connection to the smartphone.

Both watches, Apple Watch 4 and 5, are equipped with Watch OS 6. So there is no advantage for either device.

With Watch OS 6 there are a few new functions:


Which Apple Watch is better?

A highlight is the Retina Always-On display. It's a pity that the battery life remains a problem with the Apple Watch.

Is it worth upgrading to the Apple Watch Series 5?

You get partially improved hardware, with 32 GB more storage space and the additional choice to titanium and ceramics. There's also an Always-On display, an SOS function and an improved compass.

Many new features that depend on the software will also be available for the Apple Watch Series 4. Because also this gets Watch OS 6.

Unfortunately, you won't get an upgrade in battery life with the new display. So you will still have the problem of the low battery life of 18 hours.