Hyperice Hypervolt vs TheraGun G3 - Which is better? 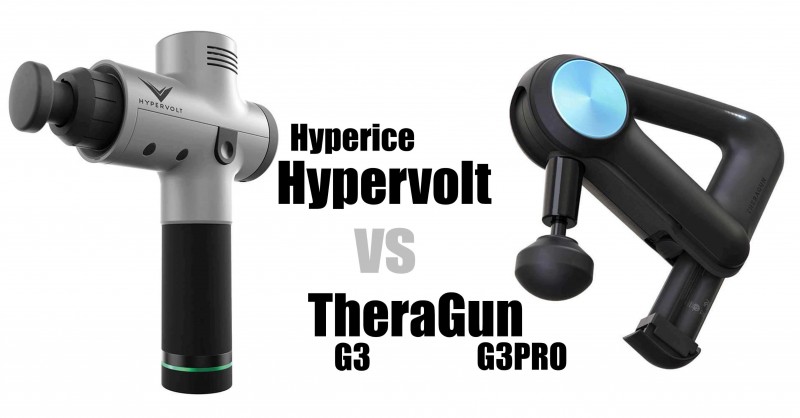 TheraGun and Hyperice Hypervolt are the best-known and best-selling massageguns on the market. Which of the two models is better? Hypervolt or Theragun. Where are the differences?

Both massageguns are available in different versions. With TheraGun there are three of them: G3PRO, G3, liv. Hyperice offers the Hypervolt and Hypervolt Pro.

Of course, the different shape of the massageguns is noticeable at first glance. Hypervolt really looks like a pistol. The device also looks a bit bulkier.

The TheraGun makes a very ergodynmic figure. That is also wanted. Due to the construction of the TheraGun you have more possibilities to touch the massagegun and are therefore freer in your movement. This is true for all TheraGun models, as they have the same shape. As a bonus the G3PRO offers an adjustable arm.

Hypervolt is a bit more limited by the locomotive. In my opinion and experience this is no problem. I could also do everything I wanted with the design of the Hypervolt.

Both TheraGun and Hypervolt allow you to exchange the attachments. Further attachments can also be purchased separately. However, this does not apply to the TheraGun liv, the smallest model.

In my opinion, the Hypervolt is a bit ahead due to different versions. Even if the G3PRO offers one more attachment. Especially the fork lifts off the Hypervolt. For the TheraGun this is not available. Also not for purchase. The selection of the G3PRO attachments represents the complete range of TheraGun.

The Hypervolt clearly beats the TheraGun G3PRO and G3 in battery life. With Hypervolt you have a battery life of up to 3 hours per battery. You can also change the battery.

With TheraGun only the G3PRO has an exchangeable battery. The battery life is up to 75 minutes per battery. The TheraGun G3 has a fixed battery with a running time of up to u 60 minutes.

The TheraGun G3PRO is even delivered directly with two batteries. This is not the case with the Hypervolt. However, the battery can be bought.

Advantages of the Hypervolt:
Compared to the TheraGun, the Hypervolt has a less aerodynamic shape. The G3PRO has an adjustable arm as a bonus. From my point of view this is not really relevant. For the very professional use this might be interesting.

I therefore recommend the Hyperice Hypervolt* in terms of value for money.