buffcoach.net
buffcoach.net
Anmelden
Magazin » Test & Vergleich » 360 S5 vs S6 vs S7 robot - Where are the differences? 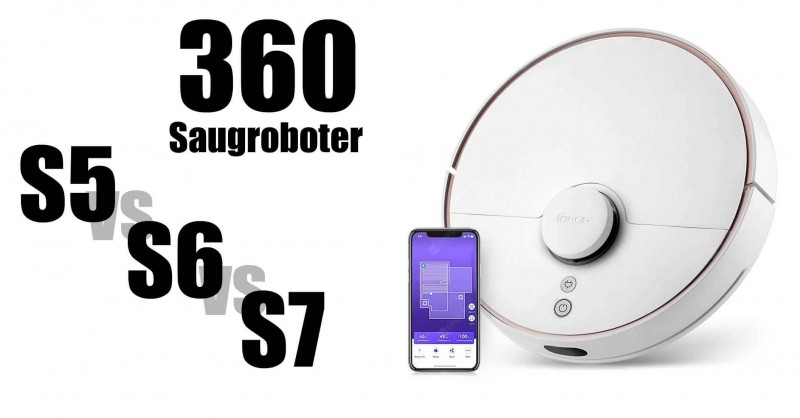 According to numbers 5, 6 and 7, the price also rises. Accordingly, the devices also offer more performance here. However, not everyone needs the largest model, as you can see in the comparison. First the important differences in brevity. That can already help you with the purchase decision:

A big difference between the S5 and the two larger devices is the wipe function. With the small S5, you don't need this function. However, the 360 S6 and 360 S7 offer you this.

Another difference between the vacuum cleaner robot models is the size of the containers for the vacuumed up dirt. Interestingly, the 360 S6 has less capacity than the 360 S5.

The vacuum cleaner robots also differ from 360 in terms of running time. Here the S5 and the S7 are in front. The S6 stands with up to 150 minutes clearly in the middle:

One of the most important points is of course the suction power. Here the S5 and S7 are equal with 2000pa. The S6 stands with 1800pa somewhat behind the two models. All three vacuum cleaner robots have a volume of 65db.

However, the three models of 360 have a lot in common, which is definitely worth mentioning. These include performance, app, scheduling and cleaning mode. Let's take a closer look at the most important points.

All three models have the same cleaning mode. They all drive through the room as planned. The first vacuum cleaner robots still drove around wildly and covered the complete areas by driving over the surfaces several times. The planned cleaning procedure will save some time here. Many inexpensive vacuum cleaner robots are still working with the wild cleaning method.

An extremely interesting feature for me is the virtual wall limitation. This can be created with the app. So you don't have to build barriers in your apartment anymore. This has often disturbed me, even with expensive devices. With iRoobot there were small modules here, where the batteries constantly went empty.

With all devices, the app can do more than just virtual space limitation. This includes remote control and the creation of schedules.

You can also use the app to view statistics and track what your vacuum cleaner robot has done.

The three devices also have the same dimensions. All three vacuum cleaner robots have dimensions of 350 x 350 x 100mm. Also the S5, S6 and S7 can exceed the same barrier height of 2 cm.

Which 360 vacuum cleaner robot is best for you?

From the comparison, it is relatively easy to say which vacuum cleaner robot is suitable for which application. The main differences are in equipment and size.

If you don't need a wipe function, the small 360 S5* is sufficient in most cases. If you want a wipe function, but don't need much capacity (small apartment), then the 360 S6* is your choice. If you are looking for a larger apartment and a wiping function, you should buy the 360 S7*. The concrete capacity values can also be found in the comparison table above.