Comparison of massage guns - Which is the best? 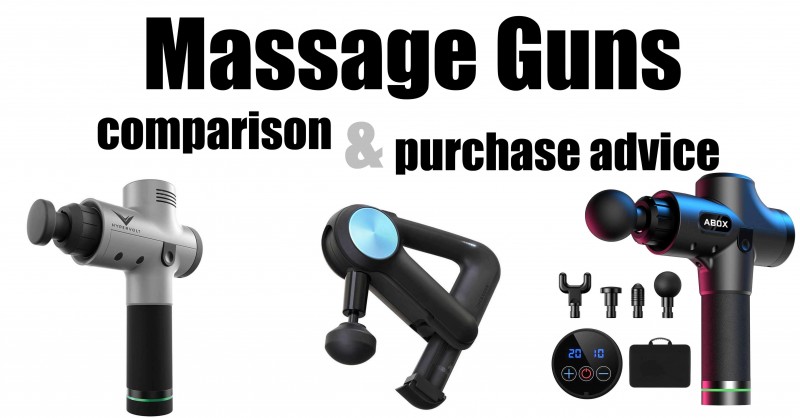 Massage guns are gaining popularity. This is also not unfairly the case. Even physiotherapists use massage guns to optimize the treatment of their parts even more. However, the selection of devices on the market is also growing. This leads to questions: Where are the massage guns different? Which massage gun is the best? It is also particularly interesting what the cheap massage guns from Amazon, gearbest or other cheap shops are good for.

When buying massage guns, there are various details which are relevant for your decision.

The performance is a big point with the massage guns. Most devices have several levels, which allows the use of different power levels.

More levels are better and allow more flexibility in massage

Most devices offer 4 levels. The power changes in the interval of the shocks. Usually the value moves between 30 and 60 beats per second. Some devices also indicate the maximum impact force or the number of watts.

More levels of course allows you a higher flexibility in the application. If you have fewer levels, you can logically only vary less during your massage. In general, however, the motto "a lot helps a lot" or "more is better" does not apply.

Whether a higher or lower level is appropriate depends, among other things, on your tissue and feeling. It may be that in some cases a lower level is much more effective than a higher one. The lower the level, the more the massage goes towards relaxation.

What does this mean for your purchase decision? In plain language, this means that a higher choice of levels is definitely better.

The stroke length describes the path the head of the massage gun takes.

Massage guns usually have an exchangeable attachment. Several of them should also be included in the scope of delivery. If this is not the case, then the selected massage gun is not a good choice.

The attachments differ from manufacturer to manufacturer. Frequently to be found, however, are:

Depending on the attachment, you can treat certain areas better. Especially with the thumb you hit trigger points very well. This is also a thing that distinguishes massage guns from fascia rolls

When buying you should pay attention to the selection of the attachments. Personally I find the fork very practical, which is not to be found with every device. The ball, the plate and also the thumb are usually the standards.

In some cases it is also possible to buy other attachments. This is especially the case with the more expensive brand models. However, not all attachments are compatible here. You should pay attention to this when buying.

This is the example of the TheraGun G3*, G3PRO* and liv*. Only the G3 models are compatible with each other. The attachments of the Hypervolt* do not fit on the TheraGun either.

Also the battery is a big factor in the massage guns and offers a difference. Many devices have a built-in battery. This has several disadvantages:

If you have a device with a replaceable battery, you can buy a second battery and continue using the device. At the same time, you can recharge the empty battery. This allows you to use the massage gun without pausing. With a built-in battery, on the other hand, you usually have to put the pistol aside and wait until it is recharged. The TheraGun G3PRO even comes with a second battery.

A replaceable battery allows longer use.

If the battery in a massage gun is firmly installed and breaks down, you can often dispose of the entire device. This distinguishes the expensive models from the inexpensive ones in particular.

The performance of the batteries is also very different. The battery life ranges from less than one hour up to 3 hours. You should pay attention to this information when buying. If you have several batteries, then this is of course less bad. Nevertheless, a longer battery life remains practical in any case.

The weight of the massage gun is not uninteresting either. You have to hold the device in your hand for the massage. If the pistol is quite heavy, it can become unpleasant and impractical at the same time. The weight is usually indicated on the devices. The lower the weight, the better it is of course.

The volume is a very relevant point with the massage guns. Unfortunately, the manufacturers themselves hardly reveal any information here. Generally the massage guns are in my opinion clearly audible.

Some cheaper devices do not perform as well and are much louder. With the brand products TheraGun and Hypervolt the values range between 65 and 75db. I also have a cheap massage gun from Asia. There the value is also 75db in the highest level.

A small bonus with some massage guns is an adjustable arm. However, this is rather rare. In my opinion this is not very important. The advantage of this is that you are even more flexible in use. An example is the TheraGyun. But only in the G3PRO* variant, which has a very nice price.

The scope of delivery is also a point of difference for massage guns. A bag is not the rule even for branded products. For example, the expensive Hypervolt from Hyperice comes without a bag. Further things in the scope of supply are the attachments and possibly even further Akkus.

Which massage gun is the best?

The price range for massage guns is very high. The branded products usually cost over 300 euros. The elite model, the TheraGun G3PRO*, even costs 600 euros. Prices of around 100 euros for a massage gun are naturally sceptical. Basically, the sotriment can be divided into two groups: Cheap massage guns from Asia* and branded products.

Also the longevity of such products is often worse. For home use, however, the inexpensive models such as the ABOX massage gun* or other cheap massage guns*# can be sufficient.

Brand products of the massage guns