buffcoach.net
buffcoach.net
Anmelden
Magazin » Test & Vergleich » Raspberry Pi 3 vs 4 - Where are the differences?

Raspberry Pi 3 vs 4 - Where are the differences? 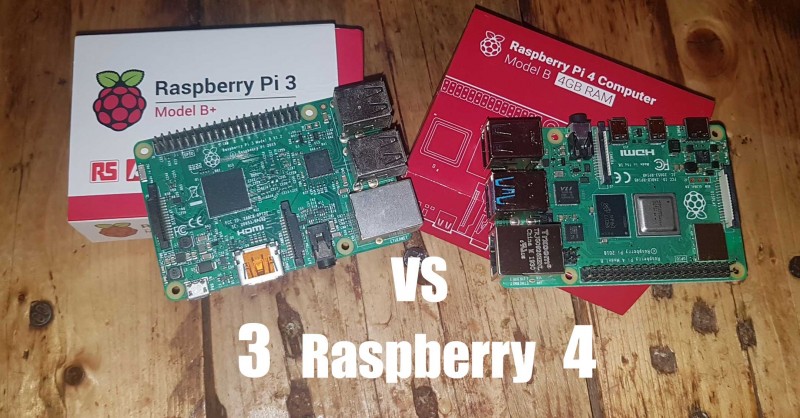 The Raspberry Pi 4 is the successor of the popular and well-known Raspberry Pi 3 B+. Both are boards with an enormous performance for their low price. Is the Raspberry 4 better than the Pi 3 B+? Let's take a closer look at the differences between the two Pi models.

Raspberry Pi 4 - Differences between the models

The new generation of the Raspberry, the Pi 4, is available in different versions. This is important and interesting for comparison and purchase decisions.

However, only the size of the RAM (memory) differs. The Raspberry 4 is available with 1GB, 2GB or 4GB RAM. All other components are identical in the different versions.

The older Raspberry Pi 3 B+* is only available with 1GB RAM. So if you need more than 1GB RAM, you have to buy the Pi 4*.

Differences between Raspberry Pi 3 B+ and 4

Basically, a glance at the technical data is enough to make the purchase decision. The Raspberry Pi 4 offers a more modern and also better equipment. All in all it offers more possibilities for use due to the better performance. Partly the 4th generation opens up completely new dimensions, especially due to the larger RAM.

Probably the biggest difference is in RAM. I had already mentioned this before. You can get the Raspberry Pi 4 with 1, 2 or even 4GB. The third generation is only available with 1GB RAM.

Also the CPU is newer and with 1.5GHz a bit faster and better. In both cases it is a quad core.

The GPU has also become somewhat faster and offers 500Mhz instead of 250 to 400Mhz.

Both Raspberry have WLAN (Wi-Fi). This was a big difference between the Raspberry Pi 2 and 3. In terms of Ethernet, the 4th generation offers more than its predecessor with 1000Mbps (Gigabyte). With this one you get only 300Mbps.

Both generations have HDMI connections for a display. But the new Raspberry Pi 4 has two small microHDMI connectors. The older Pi 3 B+ has one big HDMI connector. You should consider this when changing over. I myself did not have the corresponding cable* directly at hand.

The Raspberry 4 has got an upgrade in the point of the USB ports. This does not only concern the power connection. The 4th generation now offers you two USB 3.0 ports. Additionally you have two USB 2.0 ports. The predecessor offers you four USB 2.0 ports.

USB ports - Raspberry 3 and 4 in comparison

Because of the slightly better hardware the Raspberry Pi 4 also needs a little bit more power. Of course we still have a very low consumption. Nevertheless you should know this, because the Raspberry is also known for its economy.

The Raspberry is a board for hobbyists. Therefore the device offers some connectors for it. These are:

Raspberry Pi 3 and Raspberry Pi 4 from above in comparison With these connections there is also no difference between the 4th and 3rd generation.

The two models do not differ in size. Both have a size of 86 x 56 x 21 mm. Thus the Raspberry remains true to its principles and remains a compact device.

Which Raspberry Pi should you buy?

If you do not have a Raspberry yet, I recommend the Raspberry Pi 4*. With this model you can choose the size of the RAM. With the predecessor, Raspberry Pi 3 B+*, you have to settle for 1GB.

Besides the RAM you get with the Raspberry Pi 4 but also even better technique. You get a slightly better CPU and GPU. Then you get a Gigabyte Ethernet port and Bluetoth 5.0. The Pi 4 also offers more ports with 2 microHDMI imd USB 3.0.

Is it worth changing from Raspberry Pi 3 to 4?

Whether or not it is worthwhile to change from your Raspberry Pi 3 B+ depends a little bit on the use. If your project runs stable on the current Raspberry, then I see no reason for a change. If the slow performance or the longer loading times often bother you, then a change to the more powerful Raspberry Pi 4* is definitely worthwhile.

However, if you change, you must be aware that the connections and also the housing are not compatible.

Also the 3rd generation housing is not compatible with the 4th generation. I myself had not taken this into account when buying it. But also for the Raspberry Pi 4 there is a #set of cheap cases*.

Unsere Bewertungskriterien
Tags: ProduktvergleichVS, Raspberry The article is written by Lucas B and published on 20.12.2019.