buffcoach.net
buffcoach.net
Anmelden
Magazin » Test & Vergleich » Flow Pro ONE vs Hyperice Hypervolt - Where are the differences?

Flow Pro ONE vs Hyperice Hypervolt - Where are the differences? 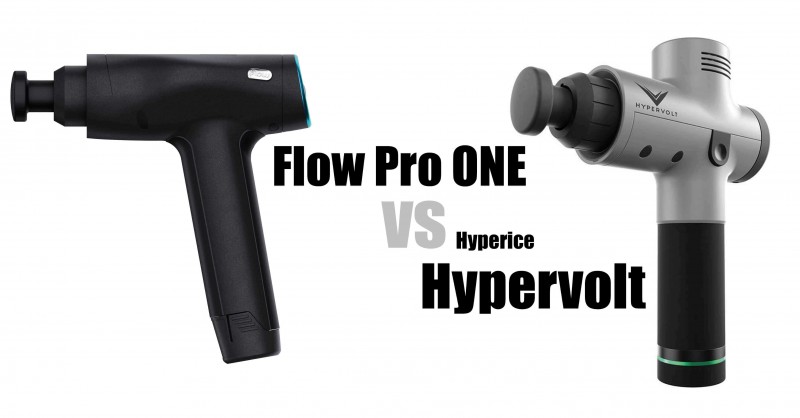 The Hyperice Hypervolt is one of the most famous massage pistols on the market. Flow Pro ONE is a slightly newer device among the massage pistols. Both are high-quality brand products and not cheap variants from China. Optically the devices are relatively similar. But where are the differences? Which massage pistol is better? Hypervolt and Flow Pro ONE in comparison.

Differences Hypervolt and Flow Pro ONE

Even though the devices look relatively similar in appearance, we have a few differences between the massage pistols.

Levels and power (beats per second)

Both massage pistols have 3 levels. So at first no difference can be seen here. The Flow Pro ONE, however, still offers a variable step. This is the Flow Wave Mode. Here the performance changes between 1,800 and 3,200 strokes per minute.

There are often differences between the massage guns. Between Hypervolt and Flow Pro ONE the differences are however smaller. Hypervolt offers only one more attachment. This is the damper.

Otherwise you get the usual attachments for both devices:


Whereby the fork can also not necessarily be seen as standard. One of the most expensive brands, TheraGun, does not supply them. This is true for all three models, as you can see in the comparison of the TheraGun G3, G3PRO and liv.

Neither the Hypervolt nor the Flow Pro ONE have an adjustable arm. This luxury is only available with a few devices, such as the TheraGun G3PRO*. This is also a big difference between the TheraGun and Hypervolt. However, I don't consider this aspect to be extremely important.

The battery life of massage pistols also varies considerably. Overall, the Flow Pro ONE* is ahead here with up to 5 hours. The Hypervolt* offers up to 3 hours runtime.

The Flow Pro ONE offers another advantage, as the battery can be changed in the massage gun. With the Hypervolt you have a permanently installed battery.

A replaceable battery is definitely advantageous for practical use. Because this way you can use the device with another battery when the other one has run out. It is also much easier to replace the battery than with the Hypervolt.

In terms of volume, the Flow Pro ONE is clearly ahead. The device is advertised with a noise level of less than 50db. The hypervolt is about 70db according to researched data. This is a good difference. A quieter application is of course more pleasant for the use, which is why I clearly recommend the Flow Pro ONE* in this point.

The point weight is checked off relatively quickly. The Hypervolt weighs 1.3 kilograms. With the Flow Pro ONE we have a weight of 1.1 kilograms. So the Hyperice device is a little heavier. For the use, however, in my opinion a relatively small difference.

It's a little strange because the Hypervolt also has a proud price. But the device is delivered without a bag. With the Flow Pro ONE you get a carrying bag included. Certainly much more practical. But this should not be a main criterion for the purchase decision.

Which massage pistol is better?

The devices hardly differ in the stroke frequency, but with the Flow Pro ONE you also have a better battery life. You can also change the battery there. With the Hypervolt you have up to 2 hours less battery life and a permanently installed battery.

The Hypervolt has one advantage. You get one more essay. Whereby the assortment of Flow Pro ONE could also be extended here.

A small, but not very important bonus of the Hypervolt: You will get a transport bag included. So all in all I recommend the Flow Pro ONE*.

By the way, the Hypervolt Plus is not significantly better than the normal version. Overall there are only two differences. These are battery life and wattage (Compare Hypervolt and Hypervolt Plus).

There are also a bunch of cheap replicas on Amazon and other cheap shops. Here you sometimes have to make compromises in performance and quality. You can read more about this in our comparison of the best massage pistols. There you will also find information about what you should look out for when buying a massage pistol.

Tags: ProduktvergleichVS, Massagepistole, Hypervolt, FlowProONE The article is written by Lucas B and published on 17.01.2020.