JBL Boombox vs Boombox 2 - What are the differences? 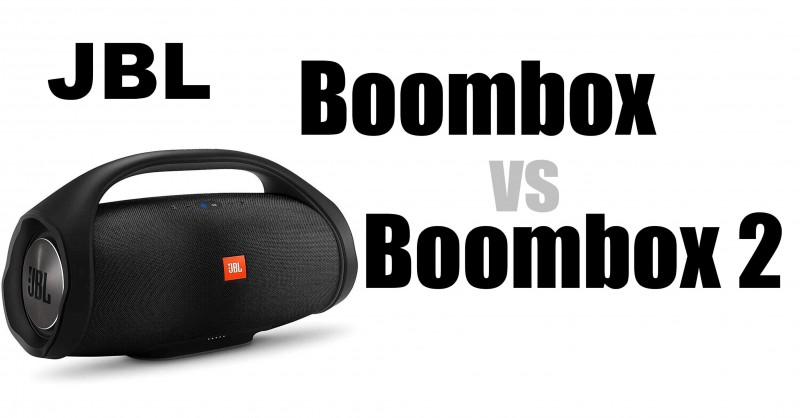 The successor to the JBL Boombox has been a long time coming. Now it's here, the JBL Boombox 2, which naturally leads to the question of the differences and which JBL Boombox is better for you. Let's take a look at the two speakers in comparison.

Visually, the differences of the new Boombox 2* are in the details. In general, the Boombox has been adapted to the current JBL line (JBL Flip 5*, JBL Charge 4* ... ).

The diaphragms are no longer made of metal, but of a kind of rubber. In addition, the battery display no longer consists of several LEDs, but only one bar.

The handle has also been slightly reworked for the new generation. In the middle there is a bit more grip and a small optical upgrade. The back is completely identical to the first Boombox.

In terms of weight, the new Boombox generation brings a little more with it. The Boombox 2 weighs 5.9 kilograms. The older JBL Boombox weighed 5.25 kilograms.

The 2nd generation Boombox is also slightly larger in size. However, the difference is small:

The battery life has not changed. Both generations of the JBL Boombox can play music for up to 24 hours. A proud achievement. Battery life is of course always dependent on the volume and also the audio content.

Both Boomboxes can be used as power banks.

A not uninteresting upgrade is in the point Bluetooth. The new JBL Boombox 2 is here with Bluetooth 5.1 on the latest standard. The predecessor still has Bluetooth 4.2 installed. This ensures a better and much more stable connection.

This is also reflected in the sound quality. The new Boombox sounds much clearer. At the same time, the highs and lows are more pronounced. Especially the bass is more extreme. The noise, which was a small problem of the first Boombox, is no longer audible.

An interesting difference is the possibility to connect different JBL Boxes. The first generation JBL Boombox is based on JBL Connect+. The new JBL Boombox 2, on the other hand, relies on JBL Partyboost.

These two technologies are not compatible with each other. So you cannot connect a JBL Boombox 2 to an old JBL Boombox. However, other JBL speakers with Partyboost can be connected to JBL Boombox 2.

Both devices are waterproof with IPX7. So we have a difference in this point and the Boombox and Boombox 2 withstand rain and splash water. Even immersion in water is possible. So the Boombox is generally also suitable for use at the pool or lake.

Which JBL Boombox is better?

Technically speaking, the JBL Boombox 2* is definitely the better device. You get a better sound quality and an upgrade in the Bluetooth version.

Even if many facts of the Boombox 2 are not different from the JBL Boombox 1, the decisive factor is better. That is the sound quality. For this reason I recommend the purchase of JBL Boombox 2*. The difference in the Bluetooth version may sound little, but it is not to be sneezed at because the stability is much better.

From the look of it I would say that it hardly matters which Boombox you buy. If you want to save a lot of money, the first generation Boombox* is of course enough. But the sound is worse.

Is it worthwhile to upgrade to JBL Boombox 2?

In my opinion an upgrade to the Boombox 2* is worth it. Even if many technical data are the same. Decisive factors such as the nominal power and sound quality are worth the upgrade.

Also the Bluetooth upgrade from 4.2 to 5.1 is a noteworthy point in the differences between the JBL Boombox and JBL Boombox 2.
Tags: ProduktvergleichVS, JBL, Boombox The article is written by Lucas B and published on 13.04.2020.