JBL Tuner vs Tuner 2 vs Tuner XL - Where are the differences? 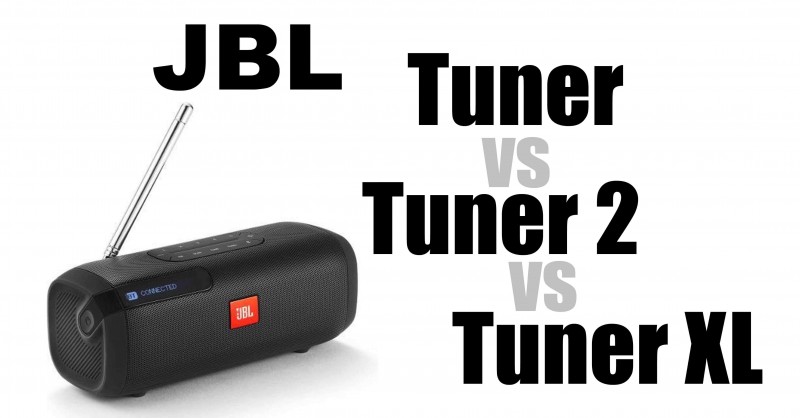 The JBL Tuner 2 and the JBL Tuner XL are the successors of the JBL Tuner. In both cases, the manufacturer has made considerable improvements. Let's look at the differences between the radios in comparison and decide in the end which one is best for you.

Where are the differences?

Of course, the battery life depends on the volume and music quality. However, this applies to all three devices, so you can use the values as a benchmark for comparison.

The older JBL Tuner also has an output power of 5 watts. The driver size is also 44.5 millimetres. In general, however, the sound quality of the JBL Tuner 2 has improved.

A big difference between the new and the old devices is the IP certification. The JBL Tuner 2 and JBL Tuner XL are waterproof with IPX7.

Therefore both units can be used in humid conditions. This is already useful for use in the bathroom, for example. The JBL Tuner is not waterproof.

It's hard to miss. The display gets bigger depending on the device. The JBL Tuner XL has a very large display and provides most of the information on it. Then comes JBL Tuner 2, the smallest display with the most necessary information is provided by the JBL Tuner.

In both Bluetooth and USB, JBL has raised the standard. For Bluetooth, JBL Tuner 2 and JBL Tuner XL offer version 4.2, while the older JBL Tuner has Bluetooth 4.1 built in.

The two new devices are equipped with USB-C. The older JBL tuner has Micro USB installed.

Which is the best radio for you?

Generally I recommend the JBL Tuner 2* or JBL Tuner XL*. Both are better with improved performance and larger displays. If you want to use the radio outdoors, you should use the JBL Tuner XL, which offers a much higher output power. You also get a larger display which shows you more information. This is the only difference between the two devices. Both have the same functions.

Furthermore, both new units are waterproof (IPX7), which is not the case with the older JBL tuner.