JBL Endurance - The differences between the models 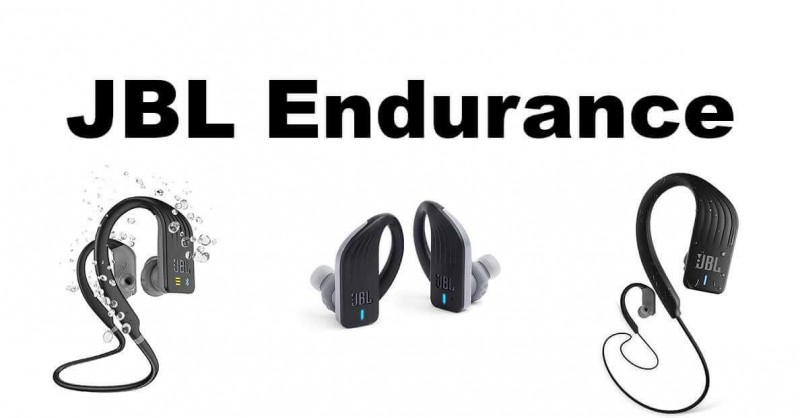 Differences between the JBL Endurance models

First of all I can tell you the core feature of each model. This could be enough for your purchase decision:

The JBL Endurance SPRINT* is the smallest version of the four models. You get a wireless headphone which is waterproof with an IPX7 certification. Of course the headphones have Bluetooth. As with the other models, Bluetooth is used in version 4.2.

The headphones have a battery life of 8 hours and can be fully charged within 2 hours.

In the scope of supply there are 3 different attachments for a better hold in the ear. You will get these with all of the mentioned versions.

The Endurance JUMP* is basically the successor of the SPRINT. Thus the two headphones are identical. But the JBL Endurance JUMP offers you two things more.

These are the more stable neckband and PowerHook. The PowerHook is also available in the DIVE and PEAK models. The headphones pause automatically when you remove them from your ear. This is interesting, for example, during conversations, so that the music doesn't continue.

The JBL Endurance DIVE* is a very special headphone in the series and also stands out from many other headphones.

The device is, like the other two, wireless and can be operated via Bluetooth. In addition, however, the JBL Endurance DIVE has an integrated MP3 player with 1GB storage space.

This makes the JBL Endurance DIVE particularly interesting for swimmers. Because the integrated MP3 player offers you an enormous advantage here. If you only have waterproof headphones and also need a device to play music, this will often cause interference. Bluetoot does not work under water. The connection via cable is usually problematic, because it creates a weak point.

If you want a headset for swimming, the JBL Endurance DIVE is definitely the right choice for you. There are not many headphones of this type on the market.

The JBL Endurance PEAK* is also something special in the series. The headphones are not only wireless, but completely wireless. This makes the headphones one of the True-Wireless headphones. This means that you have no cable between the earpieces either.

Compared to the other models the PEAK has a battery life of only 4 hours in a row. For this there is a charging case, which gives you another 24 hours of battery life. A thing that has become very common with the True-Wireless headphones. In my experience this is also extremely practical.

Which JBL Endurance is the best for you?

Of course, it depends a lot on which headphone is the best for you. As you can see, all models have a special feature.

If you want a waterproof headphone for swimming, I definitely recommend the JBL Endurance DIVE* with integrated MP3 player.

Otherwise, I recommend the JBL Endurance PEAK* because you have the advantage of the True-Wireless headphones. In all other points, except the battery life in one piece, the device offers you the same things.

As a savings option, I recommend the JBL Endurance SPRINT*, which in comparison to the JBL Endurance JUMP only offers less stability in the neckband and does not offer you a PowerHook (automatic pause when you take it out).