Fitbit Versa 2 vs Versa 3 - What are the differences? 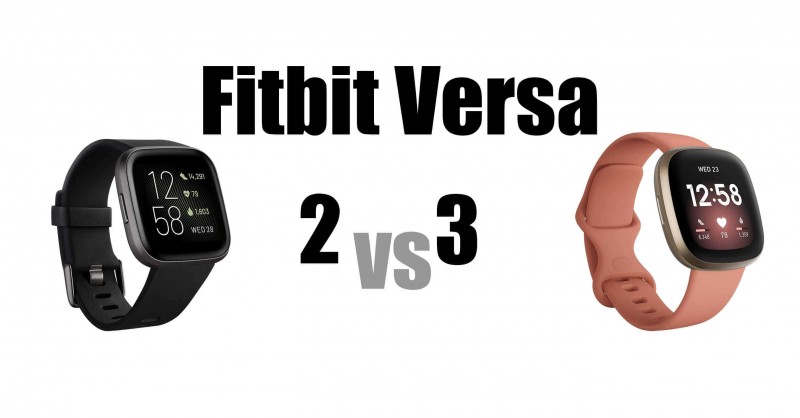 The Fitbit Versa 3 is the successor to the Fitbit Versa 2 with the release date in September 2020. Of course this immediately raises questions. What is new with the Versa 3? Where are the differences to the Versa 2? Is it worth switching? Let's clarify the questions by comparing the Versa 2 and 3.

Differences between Fitbit Versa 2 and 3

The Versa 2 has not received many upgrades compared to the Versa. Some of the upgrades were also not completely thought through, which has partly changed with the Versa 3*. This especially refers to the voicemail and call functions. But let's take a closer look at the two in comparison.

After the Fitbit Charge 4* it was already to be expected that the Versa 3 with integrated GPS would also come. This is exactly what happened.

The Versa 2 has only connected GPS. So you can use GPS and record routes only in connection with your smartphone. Sometimes this is quite error-prone.

With the Versa 3 you can now use the GPS without your smartphone. The sensor is built directly into the watch. This gives you a better accuracy and more independence from your smartphone. Fitbit not only uses GPS for accuracy, but also has GLONASS for tracking.

With the Versa 2 there was a microphone to answer directly over the watch with voice messages. The catch was that there was no speaker to listen to voice messages. In my eyes, the system was not completely thought through.

Fitbit has now made improvements to the Versa 3. In addition to the microphone, the Versa 3 also has a built-in speaker. So you can also make phone calls via the clock.

However, it is important to mention that the Versa 3 has no function for a SIM card. So it only works in connection with your smartphone.

Compared to the Versa 2, the Fitbit Versa 3 has received an upgrade in the pulse sensor. This is the first upgrade in a long time. Instead of PurePulse, the Versa 3 now uses PurePulse 2.0.

The language assistant Alexa from Amazon was delivered as a new feature in the Fitbit Versa 2. Now the Versa 3 also has the Google Assistant service. The reason for this will be Google, which may take over Fitbit.

However, I found Alexa's watch to be somewhat superfluous and I don't consider it an important purchase criterion. But that is only my opinion.

The next upgrade is the battery life. With the Versa 2 you get up to 5 days of battery life. The Versa 3 has been upgraded by one day. So you get a battery life of up to 6 days.

Also new on the Versa 3 is the quick charging. This allows the Versa 3 to be charged within 12 minutes for a complete day. In my opinion this is a very practical thing, because it means less gaps in the recording.

The Versa 2, Versa Lite and Versa wristbands are compatible with each other.

However, there is a wide range of imitation Versa 3 wristbands, so you don't have to buy the relatively expensive wristbands from Fitbit.

Which Fitbit Versa is better?

Fitbit Versa 3 naturally offers you a few more points. However, many things are not. Primarily you get built-in GPS, a slightly longer battery life and a speaker on the watch. The quick charge function is not to be underestimated in my opinion. In 12 minutes the watch is charged for one day. So there are really less gaps in the recording.

A change from the Versa 2 to the Versa 3* is not absolutely necessary in my opinion. It is rather a small luxury. But you get a few little bonuses. If you need GPS, the Versa 3 is your choice. Even if you send a lot of voice messages, you should think about the Fitbit Versa 3*.

The Fitbit Versa 2* is of course the saving tip as it has fallen in price and will continue to fall.