Fitbit Versa 3 vs Sense - Which one is better? 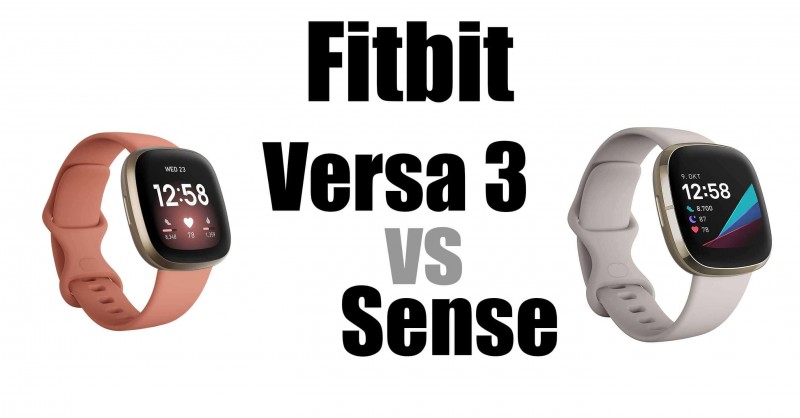 With the Fitbit Sense, the manufacturer has launched a new series in 2020. Visually, the Smartwatch is identical to the Fitbit Versa 3, which was launched in the same year. However, there are differences in the function. Let's look at the watches in comparison and decide which one is better for you.

Differences between Fitbit Versa 3 and Sense

Overall, the two fitness watches are very similar and differ only in very few points. But let's take a closer look at the watches.

The Versa 3 and Sense are identical in size and appearance. Both have a display of 40.48 mm x 40.48 mm. Both rely on your AMOLED display. Of course with color and touch.

With the Fitbit Versa 2 the Always-on display was introduced. You get this with both the Versa 3 and the Sense.

The wristbands of both devices are combinable. This means that the wristbands of the Fitbit Versa 3 also fit on the Fitbit Sense. The bracelets of the Versa, Versa Lite and Versa 2, on the other hand, are different and do not fit on either of the two new watches.

The major differences between the Versa 3 and the Sense are in two functions:

The EDA scan is probably the most interesting feature of Fitbit Sense. What we should take a look at here is exactly what it is.

To use the EDA scan, the palm of the hand must be placed on the watch. In my eyes this is unfortunately a bit cumbersome, because it does not happen automatically. In conjunction with sensors on the watch itself, the Fitbit Sense can measure stress levels and skin temperature. These values are used to determine the state of health. The Fitbit Sense should even be able to detect Covid19.

For a long time Fitbit hung out with built-in GPS hitner. 2020 the manufacturer has now equipped the important devices with built-in GPS. These are the Fitbit Charge 4, the Versa 3 and the Sense. You can also find all devices in the Fitbit GPS list.
Improved pulse sensor
The pulse sensor has been improved on both devices. So here both clocks are in the same position. But this is different from the other Fitbit devices. Here the new technology PurePulse 2.0 is used. Previously it was worked with PurePulse.

The Fitbit Sense theoretically has an ECG function compared to Fitbit Versa. However, this is not approved in Germany and therefore cannot be used. You must check whether the function is available in your region.
Battery life and quick charging
Both devices have a battery life of up to 6 days. Also both watches got the upgrade from the quick charge. So both watches are charged within 12 minutes for a complete day. In my eyes a quite useful function, because this way there are much less gaps in the recording.

Which Smartwatch is better?

Despite the many similarities the Fitbit Sense* is of course the better of the two watches. But the device also costs much more. But you only get the EDA function and stress measurement. Whether this is worth the extra charge, you should decide for yourself. In my opinion, the Fitbit Versa 3* is the cheaper and sufficient version of the two fitness watches for most people.

For new purchases I also think the Fibit Versa 3 makes more sense, as you can read in the comparison of the Fitbit Versa 2 and 3. In my opinion, a changeover is only interesting under certain conditions.

To compare the differences to other models you can either use our search or use the product comparison on versopo.com to compare the technical data.
Tags: ProduktvergleichVS, Fitbit, Versa The article is written by Lucas B and published on 30.08.2020.