Garmin Fenix 7 - Models compared - Where are the differences? 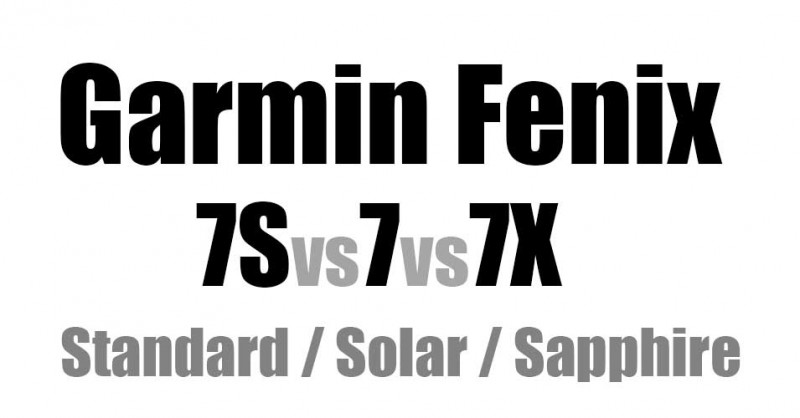 The Garmin Fenix 7 is available in different versions. The differences here are of course in the price, but also in the watches themselves. This was already the case with the Fenix 6 and even the Fenix 5. To help you with the purchase decision, here are the models of the Garmin Fenix 7 in comparison.

Thus, we have the following physical sizes on the Garmin Fenix 7:

The weight of the watches naturally changes with the size. We have listed the weights, dimensions and battery runtimes of the different Fenix 7 variants in the comparison table.

While all three variants have a touch display, the type of glass on the watches differs. The standard version of the Fenix 7 features Corning Gorilla Glass DX. This is scratch-resistant and ideally suited for rugged use. The bezel is made of stainless steel.

In the solar variant, you get the Power Glass, which has been available since the Garmin Fenix 6 series. Here, your Garmin Fenix 7 can be charged via the glass - This Fuktioniert by solar. The bezel is made of stainless steel.

In the "Sapphire Solar" variant, you also get a Sapphire glass, which is much more stable than the normal power glass. However, the power glass is completely sufficient for most users. In addition to the better glass, you also get a titanium bezel on the top model. This is also more stable.

As already briefly mentioned, solar is only available in the "Solar" and "Sapphire Solar" versions. This is actually quite logical.

However, charging the watch with solar energy is not enough to operate it exclusively with solar power. However, it extends the battery life of the Fenix 7. In the comparison to the Garmin Fenix 6 to the Fenix 7 has done quite a bit here.

The solar has clearly got more power and has thus also become a good deal more sensible. Especially if you are longer time on the road, on hiking tours or the like, the solar function is therefore parktisch and useful.

Of course, solar only brings you something when the sun is shining and your Fenix 7 can charge itself via solar energy.

Overall, the consumption of the Fenix 7 has also been optimized, so the solar also brings something more.

All three sizes (7S / 7 / 7X) have a storage capacity of 32GB in the Sapphire Solar Edition. This is twice as much as the standard and Solar variants. The two have a built-in memory of 16GB.

Of course, all models have GPS on board. However, the Garmin Fenix 7 Solar and Sapphire Solar come in all sizes with multi-band GPS. Thus, a more accurate location possible.

A special feature offered the Fenix 7X Solar and Fenix 7X Sapphire Solar. These two versions are equipped with a flashlight and thus stand out from the other models. How useful that is and whether it is worth the extra charge is up to each individual.

Features of the Garmin Fenix 7 variants in comparison

Which Garmin Fenix 7 is right for you?

There is no longer a Pro variant for the Garmin Fenix 7. This means that there are no longer any differences in the range of functions. However, there are still a few purchase criteria:

I will help you with this, of course. Let's start with the physical size. Here you can easily orient yourself by your arm circumference:


There is a certain overlap range where you can choose between two sizes. Especially with the 7 and 7X variant, there is hardly any difference.

Here, you have to personally decide how present the watch should be. The Garmin Fenix 7X is a good deal larger and thus much more present on your wrist. The Fenix 7 is a bit slimmer. I personally like rather slimmer watches and would therefore choose the Fenix 7.

The Fenix 7S is more the model for women, so slimmer wrists. For men, the variant might look a bit lost. Of course, this always remains a small question of taste.

Let's move on to the somewhat more difficult purchase criteria. Let's start with the solar here. If you are outdoors a lot and especially on longer tours, then solar makes perfect sense. By charging via solar energy, you only have to connect your Fenix 7 to the cable less often. Compared to the Fenix 6 series, I can emphfelen the solar here.

The glass or material is the next big question in the Garmin Fenix 7 decision. Already the glass of the Fenix 7 Standard is quite robust and is difficult to damage. The Sapphie variant is therefore not a must in my opinion. If you are on really rough tours, then it is worth considering, otherwise you can definitely save the extra charge.

The storage space is twice as large on the Sapphire Solar variant and is thus 32GB. The 16GB in the other variants could be quite tight. Whereby it depends on what you do. Of course, 32GB are more comfortable and you don't have to pay as much attention to the space. Besides music, maps are a big issue. Offline maps require a lot of space and can use up the entire memory. If you want to permanently have the global maps on your watch, you have to buy the Fenix 7 Sapphire Solar.

Now you have the choice between the possible models:

In the table you can find the most important differences of the Garmin Fenix 7 models in comparison.

Tags: Garmin, GarminFenix, GarminFenix6 The article is written by Lucas B and published on 07.02.2022.