Fitbit Versa 3 vs Versa 4 - What are the differences? 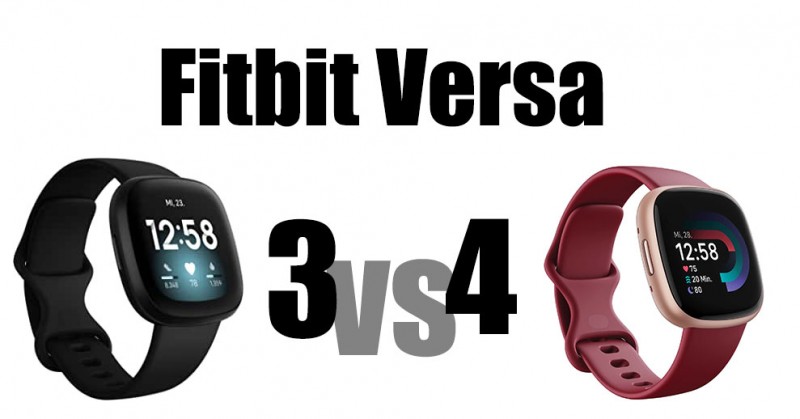 Let's go into a bit more detail and take a closer look at the differences in comparison.


Comparing all four Fitbit Versa models, the differences in design are very small and lie in the details. Although Fitbit has announced that the design of the successor, the Versa 4, will be changed from the ground up, the visual appearance is very similar to the Fitbit Versa 3.

The Fitbit Versa 4 still comes with a square display with rounded edges. However, in my opinion, this is also the distinguishing feature of the Fitbit Versa series. Personally, I like that Fitbit stays true to the basics within a series. This has also been the case with the Fitbit Charge series for years.

As with the Versa 3, the 4th generation Fitbit Versa continues to have the display stretched far to the edge, so the bezel is quite hidden. Overall, the successor is also a bit lighter.

However, there is a crucial difference, which lies in the button to operate. Unlike the Fitbit Versa 3, the Versa 4 comes with a physical button. With the Versa 3, the toch button was fraught with problems.

The biggest jump in features came between the Fitbit Versa 2 and Versa 3. It came with a large AMOLED display, integrated GPS, a speaker, SpO2, and an optimized heart rate sensor. Fitbit continues to use this hardware in the Versa 4, which means that both watches are on par in this respect.

By the way, both the Fitbit Versa 3 and its successor, the Versa 4, are still waterproof up to 50 meters (5ATM).

There is no difference in the operating system itself. The successor also still has Fitbit's operating system installed: Fitbit OS. Due to the takeover of Google, there was the suspicion that Google's system could be used here.

The Fitbit OS clearly has the advantage of a longer battery life, since the range of functions is limited. The system is optimized to run a fitness watch.

However, the integration of Google Wallet (formerly Google Pay) and Google Maps is new in the Versa 4. Contactless payment was already possible with the Fitbit Versa 3, where Fitbit Pay was used. However, Fitbit Pay could only be used with a few banks, which is a big advantage with Google Wallet. However, these features are not directly available when the watch is launched.

The sleep profile is also available on the Fitbit Versa 3. It monitors 10 measured values during sleep. Tips for a better sleep quality are offered.

However, there is something important to mention here. You can also enjoy this advantageous function with the successor only with Fitbit Premium. When you buy a Fitbit Versa 4, you get it for 6 months, but you have to pay for the service afterwards.

Another difference in the comparison between the Fitbit Versa 3 and 4 is in the training profiles or activities. There are around 20 new workout modes. These include weight lifting, dancing and HiiT. In total, the Versa 4 thus offers 40 modes to choose from instead of 20 compared to the Versa 3.

If we compare the battery life, Fitbit states up to 6 days for both the Versa 3 and Versa 4. For a smartwatch, that is indeed. Fitbit makes up for that with the very slim Fitbit OS, which is optimized for running a fitness watch. However, the battery runtime is shorter than the 6 days that are specified depending on the use.

Which smartwatch is better?

In my opinion, the differences between Fitbit Versa 3 and 4 are still small. In sum, you get the following advantages with the successor, Fitbit Versa 4*:

Software updates will be few and far between for the Fitbit Versa 3. This has already been shown in the past with Fitbit. However, the Versa 3 is still a very good smartwatch. In addition, you can save money with the launch of the Fitbit Versa 4 when buying the Versa 3*.

If you want Google Maps and Google Wallet, you have to wait a bit and switch to the Fitbit Versa 4. However, this also costs significantly more.