Fitbit Sense vs Sense 2 - What are the differences? 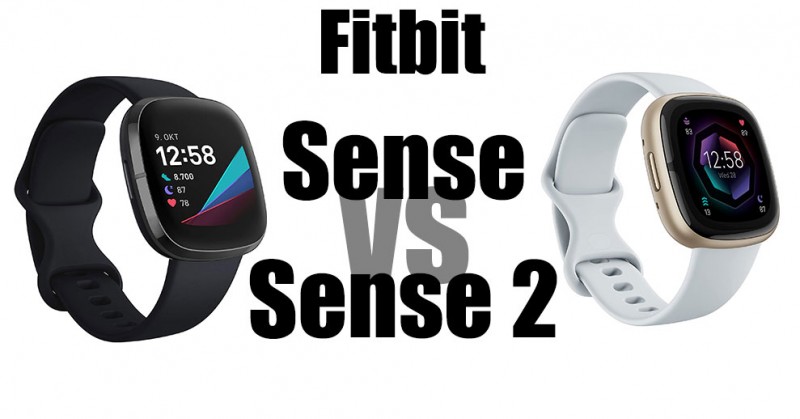 Let's go a little deeper into the comparison and the differences in detail.

Visually, there is little difference between the Fitbit Sense and Fitbit Sense 2. Both smartwatches still come with a qudratic design, which is characterized by rounded edges. Same as it is the case with the Fitbit Versa. Overall, however, the Fitbit Sense 2 is thinner and also lighter geworden.

The Bedinung with the older Fitbit Sense and the Versa 3 worked via a kind of touch button. Here there were probably various difficulties, which are to be ironed out with the Fitbit Sense of the second generation.

Fitbit has been acquired by Google. Nevertheless, the Fitbit Sense 2 still has the Fitbit OS installed, instead of Google's Wear OS. The operating system is characterized by the fact that it is optimized for the operation of a fitness watch. The advantage is the relatively long battery life. This is both the Fitbit Sense, as well as the successor, the Fitbit Sense 2, up to 6 days.

The user interface has been revised in the newer Fitbit Sense 2, however, and is thus designed to be more practical.

In addition, the Fitbit Sense 2 allows the use of Google Maps. In my opinion, really extremely practical. So you can be navigated dirkt over the wrist.

With the successor, however, this was optmiert and should provide even better results. Among other things, the position of the sensors was changed here. So the Fitbit Sense 2 overfolds your heart rhythm on signs of atrial fibrillation and protects so against cardiac arrhythmias.

By the way, it is interesting that Fitbit now provides the ECG function without Fitbit Premium. This was not the case at the beginning and a very big point of criticism.

Interesting in the comparison of voice assistants is that Google Assistant is no longer available on the Fibit Sense 2. Alexa from Amazon, on the other hand, is wohol available on the Fitbit Sense, as well as the Fitbit Sense 2. Especially considering that Fitbit was acquired by Google, this is an exciting development. However, in my opinion, Google's voice assistant is also much less represented.

Compared to the Fitbit Sense, Fitbit Sense 2 offers you 20 more training modes, making a total of 40 training modes available on the new Smartwach. Among them are modes like HiiT, weightlifting and cross-training. These are options that users have wanted for years.

In comparison, the Fitbit Sense 2* is better overall. You get an optimized ECG sensor, a sleeker design, as well as a few new features:

Especially Google Maps is a very handy feature and also the improved ECG sensor speak for themselves. Furthermore, however, the Fitbit Sense is also a good choice. If you can do without the new features, you can save enormously with the buy the Fitbit Sense* by the launch of the Fitbit Sense 2.