buffcoach.net
buffcoach.net
Login
Magazin » Test & Vergleich » Fitbit Charge 4 vs 5 - What are the differences?

Fitbit Charge 4 vs 5 - What are the differences? 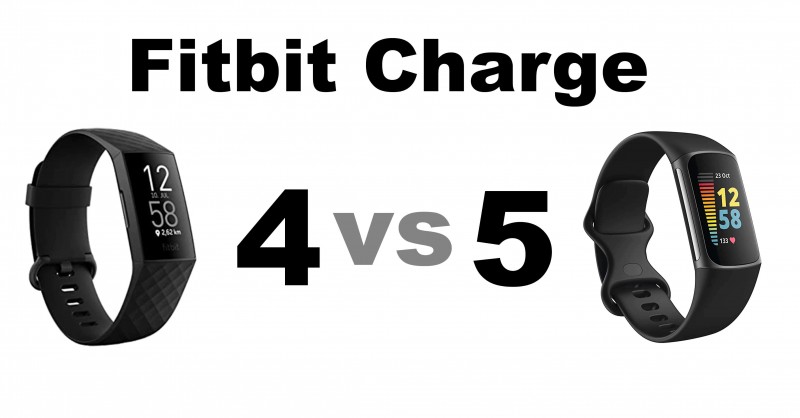 The successor to the Fitbit Charge 4 has been released after more than a year: The Fitbit Charge 5. Exciting here are of course again the differences between the two fitness trackers. Let's take a closer look at them in the comparison.

Price-wise, the Fitbit Charge 5 is priced higher than its predecessor. Thus, the new Fitbit fitness tracker should also offer more. Indeed, it does.

Brand new to the Fitbit Charge 5 is the color display. Until now, Fitbit's Charge series has been identified by a black and white display. Now that has changed. At the same time, the display should be brighter and more readable, according to the manufacturer.

With the Charge 5, Fitbit explicitly advertises an always-on display mode. However, this is not a direct difference. With the Charge 4, there is also.

In purely visual terms, there is also another difference at this point. The Charge 4 is significantly more angular in comparison. The Charge 5 is worked with more curves. Visually, possibly a bit more elegant. However, this remains a matter of taste.

ECG is currently the newest and thus most exciting topic of fitness trackers. Already with the Fitbit Sense the ECG function is offered. Now also the small Varitante has the possibility on board. The Fitbit Charge 4 does not have this possibility yet.

As I said, this option is only on board. To use the Fitbit ECG must be a Fitbit Premium subscription. I had already written about the subscription issue in the announcements from Fitbit for 2021. In order to make money in the long run, Fitbit will try to bind users via the subscription model. This is very unfortunate, however understandable.

Also, it is interesting to note that the Fitbit ECG is not intended for users under 22 years. This can be found in the fine print on the manufacturer's site. Presumably, this is because the values are determined from studies.

To better detect and evaluate Stess, the Fitbit Charge 5 offers the so-called EDA scan. This is also available without a premium subscription.

The Fitbit Charge 4 offers here only the stress management index, which additionally continues to exist with the successor.

. Oxygen saturation (SpO2) monitoring is also heavily advertised on the new Fitbit Charge 5, but it's nothing new. Also with the Charge 4 there is that. Only at the start there were delays here at the time.

The Akkulaufzeti is also advertised large with up to 7 days. However, this is not better than the Fitbit Charge 4, which also has a battery life of up to 7 days.

However, it is not tragtisch, if your sport is not there. Basically, the sport serves only the categorization and determines whether the GPS recording is started. All sports not deposited can simply be saved as "training".

It seems that Fibit has refrained from the special edition. The Charge 4 is still available in the Special Editon. However, this has always been somewhat questionable. Technically, the devices were always the same. Only the wristband was different. Since there are many cheap alternatives*, that was never an argument for me for the Special Edtion.

Common features of the Fitbit Charge 4 and 5

Let's take a quick look at some more common features in the two fitness trackers.


Which Fitbit Charge should you buy?

If you want the ECG function, then you have to go for the Fitbit Charge 5*. However, you will then also have to buy the Fitbit Premium subscription. Otherwise, you can use the Charge 5 only without the ECG.

Another advantage of the Fitbit Charge 5* is the color display. Whereas I always found the black and white display quite good in the Charge series. Here it is again a personal question of taste.

Is it worth switching?

If you already have a Fitbit Charge 4, the question naturally arises whether it is worth switching to its successor. Here, of course, you have to take a look at the upgrades again. If you have always dreamed of a color display on your Charge 4, then an upgrade is worthwhile. Whereby the price is relatively high.

Enthuses you the ECG function, which is practical, then a change is also worthwhile. Where you need here, as already often mentioned, the Fitbit Premium subscription. At least you can test the subscription for 6 months with most offers.

Let's look at a few more general questions that arise in connection with the comparison between Fitbit Charge 4 and Charge 5. A few questions are also specifically about the Fitbit Charge 5.

Are the wristbands of the Fitbit Charge 4 and Charge 5 compatible?

However, there are also cheap alternatives* to the expensive wristbands from Fitbit itself.

Are the charging cables from the Fitbit Charge 4 and Charge 4 identical?

Does sleep tracking only work with Fitbit Premium?

Can you change the watchface?

Yes, with both fitness trackers you can change the watchface in the settings.

Does the Fitbit Charge 5 support Spotify?

Furthermore, the Fitbit Charge 5, like the previous model, does not support Spotify.

Can you use the Fitbit Charge 5 in your pocket?

Can you connect a heart rate belt to the Fitbit Charge 5?

So far, you can not connect a heart rate belt to any fitness tracker of the Fitbit brand. There is only the pulse measurement on the wrist.

Does the Fitbit Charge 5 count floors?