JBL Boombox 2 vs Boombox 3 - What are the differences? 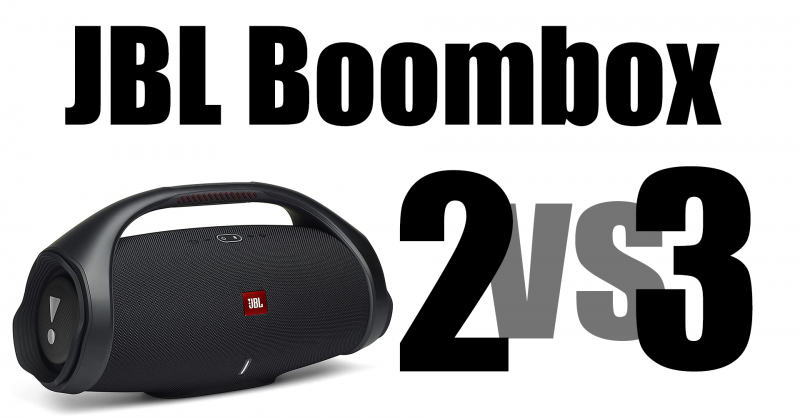 Two years the successor to the JBL Boombox 2 has been waiting. Now the is available, the JBL Boombox 3. Of course, this raises questions about where the differences are and which JBL Boombox is better. Let's take a look at the two speakers in comparison.

The visual differences in the comparison between the JBL Boombox 2 and the newer JBL Boombox 3 are in the details.

Especially the handle stands out in the comparison. The JBL Boombox 3 has a slightly offset handle, which is made of metal. Thus, the new generation looks a little more high-quality. On the bottom there is a slight profile, which allows more grip.

In terms of size, we hardly have a difference between the two JBL speakers. However, the weight differs tremendously. The JBL Boombox 2 comes in at 5.9 kligrams. The JBL Boombox 3 weighs in at a hefty 6.7 kilograms. Thus, the new Boombox 3 is also somewhat heavier in transport.

The battery life does not differ between the two generations. Here are even all three generations of the JBL Boombox on the same.

With the JBL Boombox, the battery life is still up to 24 hours with a charging time of about 6.5 hours. At the same time, all three generations can be used as a power bank.

This again provides better stability in the connection between the player and the speaker.

At the performance JBL has done with the new Boombox 3 quite a bit. There are now a total of 5 speakers. These are a subwoofer (80 watts), two mid-range speakers (80 millimeters; 40 watts) and two tweeters (20 millimeters; 10 watts). Connected by cable, the JBL Boombox 3 can thus deliver 130 watts. If the box runs on battery, the power is reduced to 98 watts.

The Boombox 3 has an IP67 rating. This means that this speaker is not only waterproof, but also dust-proof. The first two digits stands for the dust protection, the second for protection against water.

The Boombox 2 is only marked with IPX7, which means that this is officially only protected against water. A small plus point in comparison for the JBL Boombox 3.

Which JBL Boombox is better?

From a purely technical standpoint, the JBL Boombox 3 is definitely the better speaker. You get a new Bluetooth standard and, more importantly, a highly optimized sound.

Many points are identsich between the JBL Boombox 2 and 3, however, in my opinion, the most important factor is the sound quality. Thus I recommend the purchase of the JBL Boombox 3*. In addition, you get a fancier design and also an AC connection without an additional power supply.

Do you want to save money, you can of course now at the predecessor, the JBL Boombox 2*, strike. This was already cheaper at the beginning and will now still decrease in price. For this you have to accept the sacrifices in sound quality and a few other points.

Is it worth upgrading to the JBL Boombox 3?

In my opinion, an upgrade to the Boombox 3* is worth it. Again, in my opinion, the sound quality factor counts, as well as the new Bluetooth standard, of course.
Tags: The article is written by Lucas B and published on 28.09.2022.