JBL Charge 4 vs JBL Flip 5 - What are the differences? 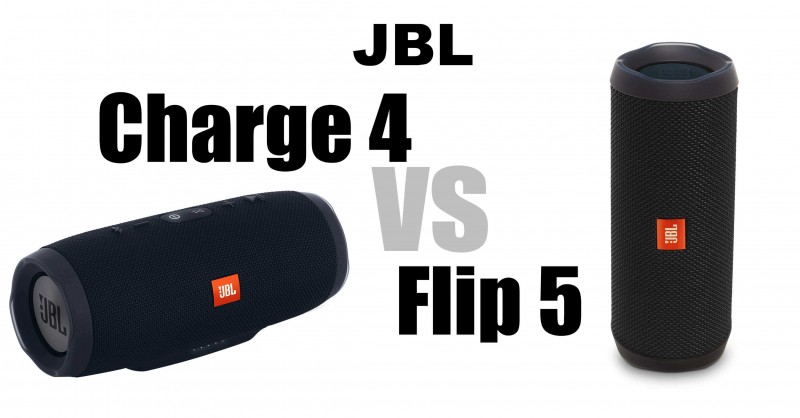 JBL has several Bluetooth speakers on offer. These include the JBL Charge 4 and the JBL Flip 5. Where exactly are the differences? Which one is better? Which one should you buy? Let's take a look at the two devices in comparison.

Differences between JBL Charge 4 and Flip 5

Overall, the two loudspeakers differ primarily in size and thus in performance. The JBL Flip 5 is somewhat more up-to-date in terms of its technical status. You can also see this in the comparison between the JBL Flip 4 and Flip 5. The basic differences between the Flip and Charge series remain the same.

The JBL Charge 4 weighs 960 grams and thus comes close to the limit of 1 kilogram. In comparison, the Flip 5 is a lightweight. At 540 grams, the speaker weighs almost half as much.

However, the battery is primarily responsible for the high weight. The JBL Charge 4 has a battery capacity of 7500 mAh. The Flip 5 offers only 4800 mAh.

Of course, this also affects the battery life. The JBL Flip 5 can play up to 12 hours of music. Charge 4 here is up to 20 hours. That is clearly more. Of course, this always depends on the volume and sound setting.

Logically, the charging time is also different. Charge 4 needs about 4 hours to be charged. The JBL Flip 5 can already be charged in 2.5 hours.

The JBL Charge series is characterized by the function of the Powerbank. In addition, the speaker has a USB port through which any device can be charged. The loudspeaker also serves as a Powerbank. The JBL Flip 5 cannot do this. Just like the Flip 4 or its predecessors.
Connections and technology
In terms of technology, the Flip 5 is a bit more advanced than its predecessor. Thus both devices, Flip 5 and Charge 4, have a USB-C port.

Only JBL Charge 4 has an AUX input, JBL Flip does not and therefore cannot play any music via cable.

In the Bluetooth version, both JBL devices offer Bluetooth 4.2. However, up to 3 devices can be paired with the Flip 5. With the Charge 4 only 2 devices can be registered at the same time. With both, only one device can play music at a time.

The JBL Charge 4 has a little more power. There we get 30 watts. The JBL Flip 5 offers only 20 watts here.

A small, probably for many not relevant difference, lies also in the handsfree. This is only available with the JBL Flip 5. The Charge 4 has no built-in microphone and can therefore not be used for telephoning.

Both loudspeakers have the possibility to connect several JBL loudspeakers together. However, this happens with different technology. The JBL Charge 4 works with JBL Connect Plus. The Flip 5 works in JBL party mode. This does not connect Charge 4 and Flip 5 devices.

Which speaker is better?

In summary, it can be said that the JBL Charge 4* only has more battery life and power. It can play a little louder music. This of course makes the Charge 4 a bit bigger and heavier. Technically, both devices are on the same level.

The Flip 5* also offers a hands-free kit. The Charge 4 offers you the possibility of a Powerbank.

If you need a power bank and a little more power, then the JBL Charge 4* is your choice. If a slightly smaller speaker is enough, the JBL Flip 5* is the perfect choice.