JBL Charge 3 vs 4 - Where are the differences? 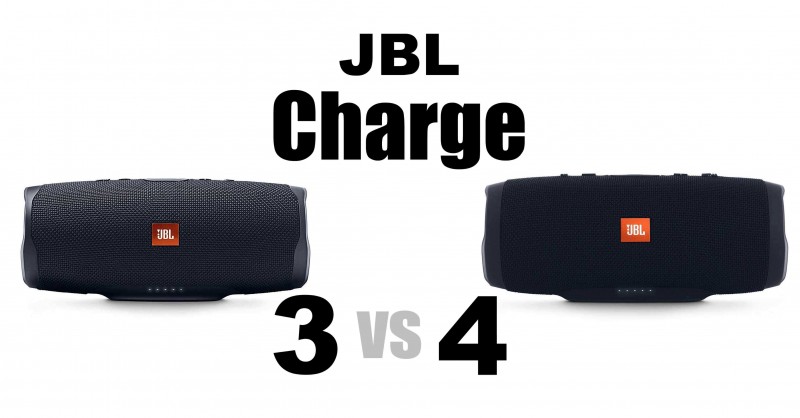 After the JBL Charge 3, the manufacturer launched the JBL Charge 4 on the market. Where are the differences? Which JBL Charge speaker is better? Should you upgrade? Let's take a detailed look at the devices.

The two Bluetooth speakers differ visually in size. But there are a few more differences in detail.

With the new version the Bluetooth speaker has grown a bit. That concerns weight and size:

This means that the JBL Charge 4 is already scratching almost the limit of one kilogram. But even this is still suitable for transport.

JBL has made good progress in battery capacity. Charge 3 had 6000 mAh battery power. Charge 4 has much more with 7500 mAh.

However, this doesn't affect the battery life. Both devices are advertised with a battery life of up to 20 hours. Of course, the performance depends strongly on the usage. The louder the music, the faster the battery empties.

The battery life doesn't increase with the JBL Charge 4 despite more capacity, as the new JBL Charge brings more performance with it. This also needs more power.

The JBL Charge 4 can be charged much faster despite a higher battery capacity. The charging time is only 4 hours instead of 4.5 hours.

Both JBL loudspeakers have an automatic switch-off function.

The JBL Charge 3 has 2 x 10 Watt installed. The new Charge 4 has only one RMS output. Here with 30 watts however a good number more performance.

JBL has also added to the sound quality for itself. Especially at higher volume the manufacturer has worked on the sound.

The JBL Charge is known for its additional USB output, which is also one of the differences to the JBL Flip. This USB port can be used to charge external devices. So the Bluetooth Box can be used as a powerbank.

Furthermore the Charge 3 as well as the Charge 4 have a jack connection. The speakers can also be used without Bluetooth.

The JBL Charge 4 has a USB-C port, which makes the speaker stand out from the older Charge 3. The predecessor has a MicroUSB port for charging. This upgrade is also responsible for the significantly shorter charging time.

In the Bluetooth version there was also an upgrade. The new JBL Charge 4 is equipped with Bluetooth 4.2. Charge 3 still has Bluetooth 4.1. The new version runs a bit more stable.

Both speakers are IPX7 rated. Thus both Bluetooth loudspeakers are waterproof to 1 meter and 30 minutes. This should definitely be sufficient for use in a pool or swimming pool.

JBL Charge 3 and 4 can withstand rain and other splash water.

In addition, the JBL Charge 4 has the JBL Connect Plus function, which allows several JBL loudspeakers to be connected in a network. This means that the same music can be played on several speakers. For most people this function will probably not be very important.

Charge 3 has one function more than JBL Charge 4. That would be hands-free. For some reason JBL didn't use this function anymore in the fourth generation.

Which JBL batch is better?

Overall, both JBL Charge models are good speakers. When buying a new one, it makes sense to buy the new JBL Charge 4*. Especially if the price difference is small. You won't get more battery life, but more power and sound quality. In addition, the Charge 4 is at the cutting edge of technology. These include USB-C and Bluetooth 4.2.

Most people will probably be able to do without the hands-free function. Both speakers are waterproof with IPX7.

Should you upgrade to the JBL Charge 4?

If you own a JBL Charge 3, then you are also well served with the model. In my opinion, an upgrade is not worth it. Only if the volume of the JBL Charge 3 is not enough for you, it would make sense to upgrade to the JBL Charge 4*.
Unsere Bewertungskriterien
Tags: ProduktvergleichVS, BluetoothLautsprecher, JBL The article is written by Lucas B and published on 21.07.2019.