Garmin Forerunner 945 vs Fenix 6 Pro - What are the differences? 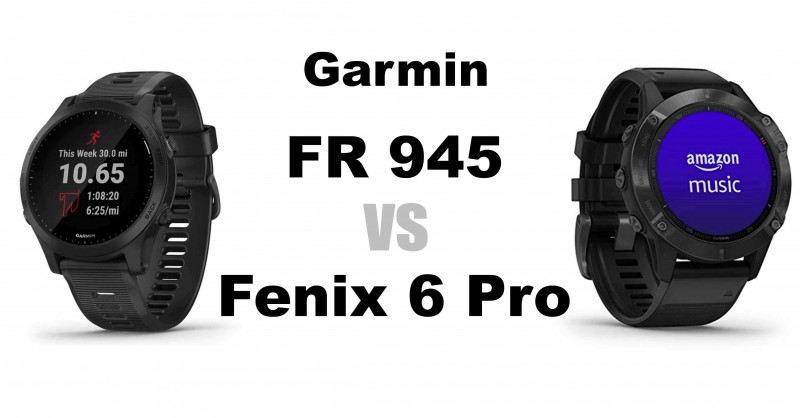 The Garmin Fenix 6 Pro offers a little bit more than the Garmin Forerunner 945. Let's take a closer look at the differences. In comparison, we'll also decide which Garmin is best for you.

It is important to note that this is the Fenix 6 Pro. The basic version of Fenix has some features less.

In terms of battery life, the Forerunner 945 again offers the same result as the Fenix 6.

However, the Fenix 6 still offers various energy-saving options here. This allows a battery life of up to 48 days.

After an update you can also use the pulse sensor under water with the FR 945. This makes both the Fenix 6 and the FR 945 suitable for swimming.

Although both watches support Garmin Golf, the Garmin Fenix 6 offers a little more here. Of course, this is only relevant for professional golfers.

PacePro was introduced with Fenix 6 and was initially only available there. After an update Pace Pro is also available for the Garmin Forerunner 945 and Forerunner 245.

This is a special function for runners to optimize the running units.

There's music on both watches. However, the Fenix 6 has a few advandayss here. You can store a little more music on the watch and also use streaming services directly from the watch. With the FR 945, this is done via the connection to the smartphone. Please note that only the Fenix 6 Pro supports music.

Which Garmin is better for you?

In general, the Garmin Fenix 6 Pro* is the better watch for both. But it doesn't mean that you need the Fenix. As is so often the case, it all depends on your use of the watch. In general, the merits of the Fenix 6 are already very detailed and are quite special. For most, the Forerunner 945* or even the Fenix 5 Plus* is enough. You can also compare the Garmin Fenix 5 Plus and FR 945.