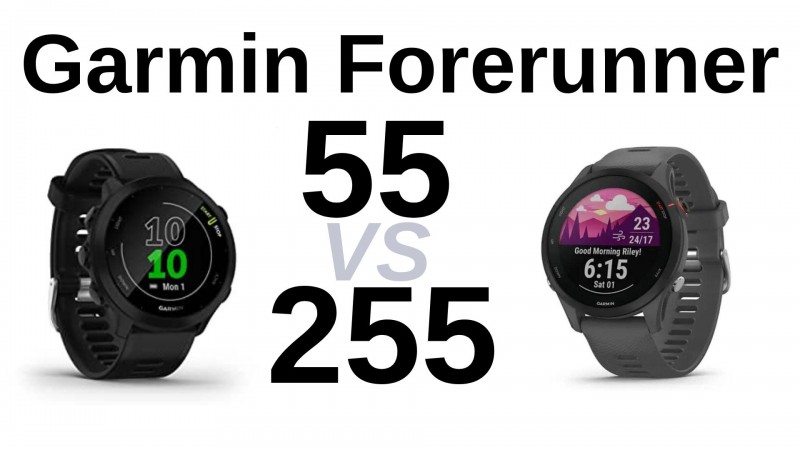 In short, the Garmin Forreunner 255* offers a bit more. For most, benders beginners or Einstiger, the Forerunner 55* is, however, quite sufficient.

Visually, the two Garmin Forerunner 55 and 255 look quite similar. However, the older Forerunner 55 is slightly smaller. The display sizes in comparison:

In addition, there is the Forerunner 55 only one size. With the Garmin Forerunner 255, you have the choice between a small and large version: 255 and 255s.
The resolution is both newer Forerunner 255 models also slightly higher:

Due to the higher resolution, the display or image of the Garmin Forerunner 255, especially in the large variant, of course looks much higher quality.

You can change the wristband on all three Garmin watches without any problems. When buying a new wristband, however, you must always pay attention to the size of the bands, since not all watches use the same ones. Generally, however, there is a large selection of inexpensive wristbands for each of the watches. The original ones are not necessary here:

Even the older Garmin Foreunenr 55 even offers a few additional functions such as VO2 Max, the recommended recovery time and Body Battery - a pratksiche Funtkion of Garmin watches, which helps you in your training planning and performance improvement. Also PacePro is available with the Forerunner 55. This Funtktion helps you to keep a steady running pace and thus achieve a better performance when running.

With the Garmin Foreunner 255 there are still a few further additional functions. This includes the Morning Report. This shows you in the morning how you slept, how your training was and what the weather looks like for the coming day. In addition, the 255 has the Garmin function Health Snapshot as well as Acute Load and Up Ahead. Furthermore, you can now access Triathlon and Multisport Activity Profiles on the watch.

If you buy the Forerunner 255 Music, you have the option to upload music to the watch or listen from Spotify, Deezer or Amazon Music and leave your phone at home.

A bonus of the Garmin Forerunner 255 is also that you can make contactless payments with the watch. The whole thing works with Garmin Pay. With the Forerunner 55 there is not.

Which Garmin Forerunner is better?

However, if you're a beginner and the basic features are enough for you, then you'll be very well served by the Garmin Forerunner 55*. Unless there's an offer, you'll also save some money with the Forerunner 55.