Pull Ups vs Chin Ups - What is the difference? 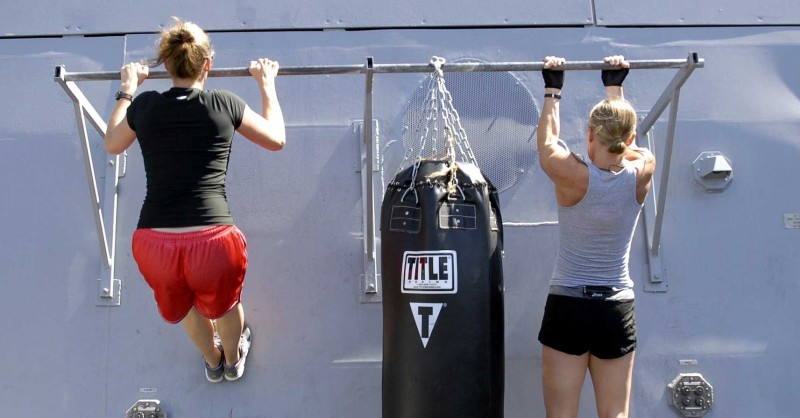 © Eigentümer des Fotos:skeeze, Pixabay When asked about the five most important strength exercises, each trainer or experienced strength athlete will give you a list on which the pull up can be found. This is rightly the case, because pull ups are the best exercise for building muscles and increasing the strength of the back and biceps. Often the pull up is also used as a measure of the level of strength.

Pull up vs chin up - The Differences

Let's have a closer look at the differences between the two types of pull ups.

The first and most obvious difference between the pull up and the chin up lies in the grip which is used.

The third possibility is the neutral grip, where the palms are facing each other.

Although both variants represent a vertical pulling movement and mainly train the back and biceps, they do so in different ways.

The difference is not big and does not make either exercise better or worse. However, it means that the latissimus is addressed in different ways. In order to build muscles it is therefore advisable not to neglect either of the two variants.

The chin ups put more emphasis on the biceps, which is why many athletes are stronger in this exercise than in the pull ups. So it is common for an athlete to do 10 chin ups, but only 6 pull ups. So it is also clear that with chin ups usually more additional weight can be used.

Most beginners also start with the chin up before they are able to pull up.

Even if both exercises train the back and the biceps, this happens to a different extent.

The grip distance plays an important role. The tighter the grip is chosen, the more the biceps moves into focus. If another handle is used, more strain is placed on the back.

Like any strength training exercise, both pull up and chin up exercises are safe as long as they are performed correctly. Here I give a few tips for the execution:

Any kind of pull up, chin up and also lat pull in the neck, so behind the head is bad for the shoulders. Although many do this for years without having any problems, but very many get shoulder problems over time. I wouldn't recommend this version.

Also too much grip is bad for the shoulders and can lead to injuries. The extremely wide grip technique is particularly widespread in bodybuilding. Many people there mistakenly believe that this leads to a wide cross. But this fact is wrong. The grip should not go extremely over the shoulder width.

Pull up or chin up - Which is better?

I personally do both types of pull ups because they have different aspects. But to train the back better I would recommend the pull up. For those who don't have a pull up yet, I can advise to start with the chin up or neutral grip.

In order to become stronger in pull ups, I can recommend to practice both exercises. This will lead to the best success in the end and also brings variety into the training. In general I recommend to vary the grip width and to train and try any kind of pull up. There are also special training programs which only serve to increase the pull ups. For example Parvel's Fighter PullUp Program.
Tags: The article is written by Lucas B and published on 29.04.2019.