Fitbit Aria 2 vs Garmin Index - Which body scale is better? 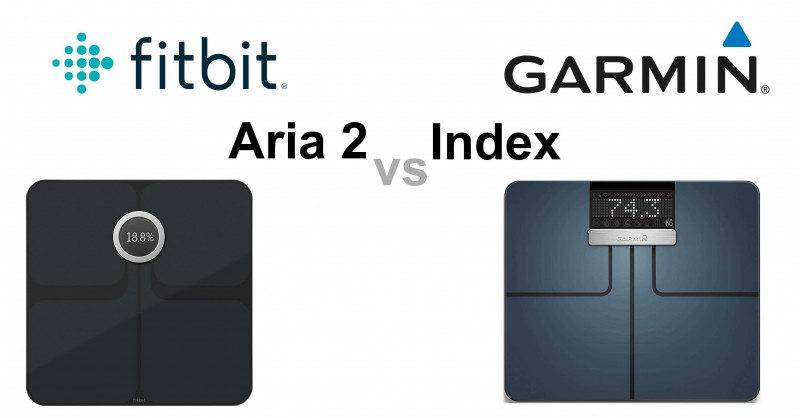 Fitbit and Garmin are the market leaders in fitness trackers. Both manufacturers also offer smart body scales that work practically with WLAN. These are Fitbit Aria 2 and the Garmin Index body composition monitor.

Both scales can, of course, measure body weight. But that's not all, which is why the devices are also called body analysis scales. However, there are differences here:

Overall, the Garmin Index gives some more information about the body composition. The most interesting values for body weight and body fat percentage are provided by both models.

The measurement of the body fat percentage is a problem with both models, since no hand-held device is used.

However, the type of measurement is a small disadvantage for both devices. The problem is that both Garmin and Fitbit work without a handheld device. This has an enormous effect on the measurement and determination of the measured values.

For that you should know how a body fat monitor works. In short, current pulses are passed through the body. Therefore the scales have contacts on which you stand with your feet. It is measured how long the current takes to get from one side to the other in your body. The resistance is measured.

Now to the problem. Without a handset, your upper body is basically ignored. The current looks for the shortest way. With Fitbit and Garmin that would only be the legs. Thus the value is falsified in both cases and is not particularly meaningful.

In the case of the Garmin and Fitbit scales, you can use the value if only as a reference value. If you want more meaningful values for your body fat percentage, you should look at other models. For years the Omron BF511* has been the market leader here. It works with a handheld device, which also includes the upper body in the measurement. Unfortunately, the Omron model is not WLAN-enabled and therefore not smart.

As a rule, body scales always have a maximum weight with which they can be loaded. Here the two devices differ slightly.

The battery life is of course strongly dependent on the use. The Fitbit Aria 2 has a battery life of up to one year. With the Garmin Index the value is up to 9 months. Dami is slightly ahead of Garmin in this respect.

Due to the built-in WLAN in the body scales, the battery life is significantly lower than with conventional scales. With other scales, without smart function and WLAN connection, the batteries last much longer.

In any case I recommend to use rechargeable batteries in order not to have to use always new batteries. This protects the environment and your wallet.

Smart body scales are characterized, among other things, by the storage of data. Here there is usually a limited number of users. This is also the case with the Fitbit Aria 2 and the Garmin Index.

With Fitbit up to 8 users can store values at the same time. With Garmin there are up to 12 users. Without storage, an unlimited number of people can weigh themselves.

However, I think that even the 8 users are perfectly sufficient for most users. Based purely on the numbers, however, Garmin's model is also ahead here.

Optics and design are of course always subjective factors. In the comparison between the Fitbit Aria 2 and Garmin Index I find the difference quite small. Garmin has an angular and slightly larger display. Fitbit offers a round and slightly smaller display. This makes Garmin easier to read.

Both scales have a glass surface and look similar overall. Both models are available in black and white. We don't really have any differences here.

For the purchase decision the compatibility, respectively the connection possibility, is a big factor. Finally, both scales transfer their values to the in-house services. This happens via WLAN. You can retrieve the data via the apps or websites of the manufacturers.

Of course, both devices are easiest and best to use with the respective apps of the manufacturers. There are ways to bring the data from Garmin to Fitbit or to transfer the data from Fitbit to Garmin. However, both cases are more complicated and potential sources of error.

Which scale is better?

If we look at the two scales in the overall view, both models have the same problems. The body fat values are measured without a hand-held device and are therefore not particularly good in both cases. If you value a correct body fat measurement you should have a look at Omron BF511*. The model is not smart, but the Omron BF511 convinces by quality in the test.

Otherwise both Fitbit and Garmin offer sufficient user space and no significant differences in battery life.

Both scales have a glass surface and are available in black and white. The display of the Garmin Index is slightly larger than the Fitbit Aria 2. What's better depends on your preferences.

Which scale is right for you?

If you have a Fitbit fitness tracker you should use the Fitbit Aria 2*. If you're wearing a Garmin fitness tracker, the Garmin Index* is probably the better choice for you. The condition and comfort will definitely be better. The Garmin scales are a bit expensive, but we are talking about 10 Euro.