Fitbit Charge 3 vs Samsung Gear Fit 2 Pro - Which is better? 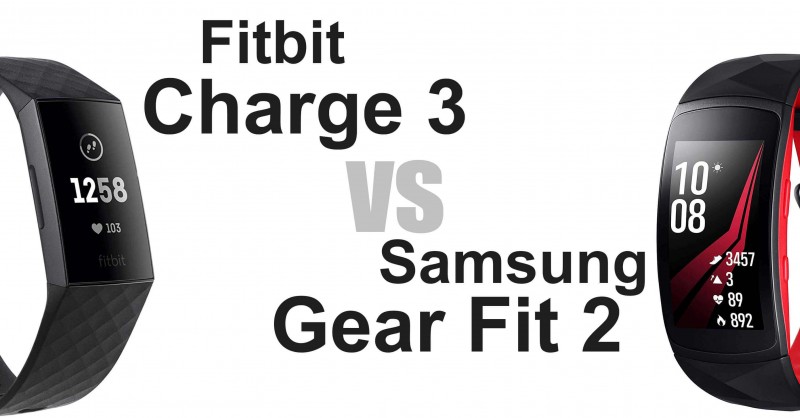 With Charge 3, Fitbit has created the most popular Fitness Tracker 2018. The equivalent of Samsung is the Samsung Gear Fit 2 Pro. One reason to compare the two and decide which Fitness Tracker is the better choice for you.

It is important to mention that both fitness trackers have a pulse sensor. Both also measure 24/7, which means that both devices are well operated and usable in terms of heart rate measurement. So we can't depend on the pulse sensor which fitness tracker is better. Let's take a look at the differences.

The Samsung Gear Fit 2 Pro has a built-in GPS. So you can also record routes without your smartphone.

Personally, I don't mind the point on Charge 3. The Connected GPS also works very well and reliably for me. The power saving mode on the smartphone should be deactivated, however, so that there are no gaps in the recording.

The Fitbit Charge 3 is ahead in terms of battery life. The Fitbit charge is up to 7 days. With Samsung, on the other hand, it is only up to 4 days.

Of course, the usage depends strongly on the benefit of the Fitness Tracker. In training mode, both devices consume more battery and need to be recharged faster. GPS in particular consumes a lot of power and significantly reduces battery life.

Although both Fitness Trackers have an OLED display, only the Samsung Gear Fit 2 Pro has a color display. Charge 3 only has a grayscale display. Nevertheless, the Charge 3 offers a lot of space on the display and also allows a lot of operation via the clock itself.

A small and nice bonus for the Fitbit Charge 3. From my point of view this should not be the decision factor for the purchase. Of course the contactless payment is practical, but can also be realized via the mobile phone via Google Pay or Apple Pay.

Samsung offers a memory for music, which is not available with Charge 3. The Samsung Gear Fit 2 can also be connected to Spotify.

Fitbit doesn't connect to Spotify with any of its fitness trackers. On other machines, however, Fitbit works with Deezer, an alternative to Spotify. This is for example a difference between the Fitbit Charge 3 and the Versa.

At this point Samsung again trumps that the Fitness Tracker can be used without a smartphone.
Women's Health
Fitbit is generally ahead of its competitors with its "women's health" function. This function is also built into batch 3. This allows women to monitor their cycle, among other things. Samsung does not offer any such functions with the Gear Fit 2 Pro.

After the differences, let's take a look at the relevant similarities of the two trackers, which are decisive for the purchase.

This can also be easily illustrated in a list:

Interesting is the point wristbands, since these can be changed with both devices. So you can change the Charge 3 and the Gear Fit 2 Pro with little money optically strongly. A thing that is becoming more and more popular and from my point of view extremely practical.

There are also a lot of imitated, cheaper, bracelets under 10 euros. There is always worth a look.

Fitbit or Samsung - Which Fitness Tracker is better for you?

Samsung, on the other hand, moves in completely different areas. The manufacturer is known for smartphones and televisions, which it does well.

In general I am a supporter of Fitbit and this case the Fitbit Charge 3*. Fitbit's app is also very user-friendly and has become better and better to use over time. Samsung works with Samsung Health.

Both devices have a pulse sensor and are waterproof. The wristbands of both devices can also be changed. So both Fitness Trackers are not a bad choice.

All in all, the question is not which tracker is generally better, but which fitness tracker is better for you.

If you are looking for a Fitness Tracker with integrated GPS and music memory, you have to choose the Samsung Gear Fit 2 Pro*. Here you have the advantage that you can work without a smartphone. Compared to Charge 3, the Gear Fit 2 Pro has a color display.

buy Fitbit Charge 3 * * buy Samsung Gear Fit2 Pro * *
If that's not important for you and Connected GPS is enough for you, the Charge 3* is the more elegant choice. Fitbit trumps with experience and continues to evolve. As a bonus, Charge 3 gives you contactless payment and the function of women's health.