Fitbit Charge 3 vs Garmin vivosport - The Fitness Trackers in Comparison 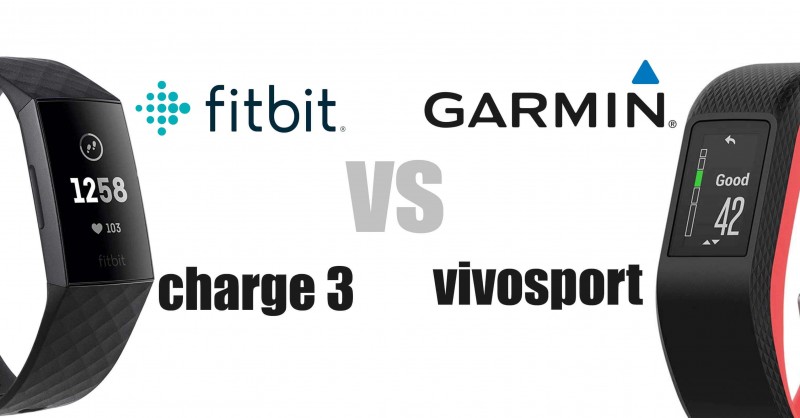 Among fitness trackers, Fitbit and Garmin are among the most important brands. Both have good models on offer and have proven themselves. The Fitbit Charge 3 belongs to the Top Fitness Trackers 2018. But also the Garmin vivosport belongs to the good and popular models.

Not only optically, but also in the hardware the two Fitness Trackers differ. Let's look at the differences between Charge 3 and vivosport in detail.

Fitbit and Garmin are doing a good job!

We don't have to spend much time on the HR function, i.e. measuring heart rate. Both offer 24/7 heart rate measurement, which is essential for a good fitness tracker.

Fitbit and Garmin are also reliable in terms of accuracy. This is one of the reasons why both brands have established themselves in the field of fitness trackers.

The pulse measurement does not make the difference and is not decisive for the choice between Garmin vivosport like Fitbit Charge 3.

Fitbit Charge 3 is slightly larger and heavy. All in all a bit more chic and can be adjusted with interchangeable tapes.

Compared to its size and weight, the Garmin vivosport is slightly smaller and lighter. Nevertheless, the dimensions of the devices are very similar.

The weight of the Garmin vivosport is between 24 and 27 grams. The Fitbit Charge 3 weighs 29 grams and is therefore a little heavier, which is not worth mentioning.

If we take a look at the overall appearance, I think Charge 3 makes a slightly more chic impression. With the Fitbit Charge 3 you also have the possibility to change the bracelet. So you can change and adjust the design very much. The choice of cheap wristbands is big here. The bracelet from Garmin vivosport cannot be changed, so the design is more limited.

Fitbit Charge 3 has a bigger display and more data on the screen.

The display, on the other hand, is different. On Charge 3, Fitbit has a much larger area than Garmin on vivosport. Only the Garmin vivosport offers color. Charge 3 is only available in black and white.

All in all Fitbit offers more possibilities directly on the display. You can read more data and values directly from the clock. The condition is also a bit more pleasant and easier than with vivosport.

Another difference is the physical button, which is only available with Fitbit Charge 3. The vivosport is operated purely via touch. This is not tragic as Garmin has set up the control accordingly. Only with drops of water on the display the condition can be harder with Garmin than with Fitbit.

#Probably the biggest difference between Fitbit Charge 3 and Garmin vivosport is the GPS. At this point, the Fitness Tracker from Garmin with an integrated GPS sensor trumps. The Charge 3, on the other hand, only has Connected GPS. So you can only use the GPS with your mobile phone with the Fitbit device. The accuracy is of course better with your own sensor, the Garmin.

Sensors have more in common than differences. Both have a pulse sensor, a 3-axis sensor and vibration.

As mentioned in the previous section, the vivosport has a built-in GPS sensor, which makes a difference.

The Fitbit Charge 3, on the other hand, offers you a SpO2 sensor that Garmin doesn't have.

Battery life is always important and interesting for Fitness Tracker. Nobody wants to charge the device daily. The Garmin vivosport and Fitbit Charge 3 have an identical battery life of up to 7 days.

However, you have to take into account that the use plays an important role. Activated training mode has a strong effect on the battery and shortens the battery life.

With the Garmin vivosport, the GPS point is particularly important. If GPS is activated, the battery life will be reduced to up to 8 hours. This is referred to as permanent recording.

Both devices are waterproof up to 50 meters. This allows you to swim with the Garmin vivosport and the Fitbit Charge 3. Both fitness trackers can also record the tracks. None of the machines offers much more.

Please note that this option is only available with Fitbit Charge 3 in the Special Edition. This is a bit more expensive.

The app is necessary to completely read and evaluate the data from the Fitness Tracker. Both devices work with Android and iOS. Both manufacturers also rely on their own software.

Garmin trumps here with many possibilities. A lot of data can be evaluated. It is also possible to create complex evaluations and exports. For most, however, these are already much too special. In addition, this makes the app in my opinion somewhat more unfriendly in the condition.

Fitbit has an extremely user-friendly interface in its app. Here you can see all important data directly. Historical data can also be viewed. Fitbit also offers smaller evaluations and additional information. But a little less than Garmin.

Overall, it can be said that for most people the Fitbit app is more convenient and easier. For extreme athletes who need many evaluations, Garmin is sometimes better. Here the difference is due to the type of application. Garmin offers functions for experts, especially for distances and altitude recordings. However, Fitbit also provides a lot of information that is completely sufficient for most people.

Which Fitness Tracker is better for you?

Definitely the Charge 3 from Fitbit and vivosport from Garmin are good machines. Both Fitness Trackers are definitely recommended. This means that you are not making a fundamental mistake with any of the two machines.

However, the question which of the two fitness trackers is better cannot be answered in general. Whether the Garmin vivosport or Fitbit Charge 3 is better for you depends on your needs and the intended use.

If you only want to wear the device during sports and later have many evaluations, then I recommend the Garmin vivosport*. A decisive reason for this is the built-in GPS sensor. This allows you to make better track recordings. You can also connect vivosport with some running apps and export the data. With Runtastic, for example, you can only connect Fitbit via detours.

If you're looking for a fitness tracker for permanent use, I recommend Fitbit Charge 3*. The Charge 3 trumps with a stylish look, larger display and interchangeable bracelets. Charge 3 in the Special Edition also offers you the possibility to pay contactless via NFC. In my opinion, this is the better device for non- or normal athletes.

Unsere Bewertungskriterien
Tags: Fitbit The article is written by Lucas B and published on 27.04.2019.