Xiaomi Mi Band 4 vs Huawei Honor Band 4 - Which is better? 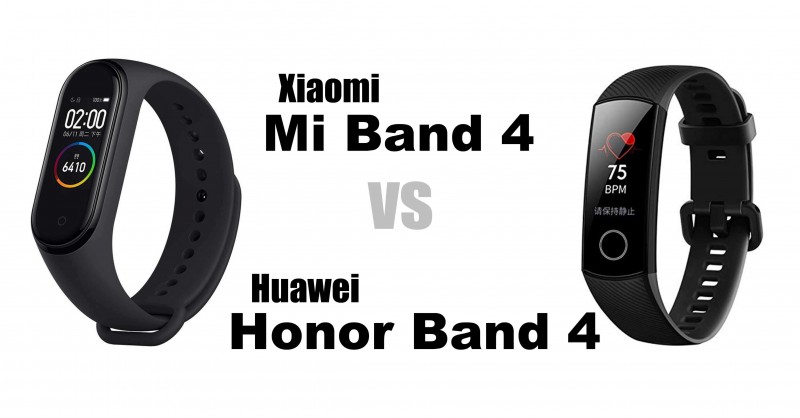 There are also good fitness trackers in the low price segment. Among the best known and most popular models are the Xiaomi Mi Band 4 and the Huawei Honor Band 4. The question is where the differences are and which fitness tracker is better.

The Mi Band 4 is from 2019 and thus the newer of the two models. In the comparison between Mi Band 3 and 4 some things have changed and Xiaomi has upgraded a lot. This makes the Mi Band 4 even more interesting and gives much less arguments for the Honor Band 4 from Huawei. Let's look at the differences in detail.

In the comparison between Honor Band 4 and the Mi Band 3 the Honor Band with its large color display was clearly ahead. This has now changed. The Mi Band 4 also has a color display, which is identical in size with 0.95 inch. Both devices have an AMOLED display.

Both fitness trackers don't fool themselves with this. Both displays are controlled by touch and offer the same amount of space for displaying the values.

The Mi Band is generally known for its incredibly long battery life. That hasn't changed with the Mi Band 4 either. The fourth generation Xiomi Fitness Tracker can be used for up to 20 days without recharging. This puts the Mi Band definitely at the top.

The Honor Band 4 has a battery life of up to 14 days. In both cases the battery life decreases with the type of use. The more intensive the use, the shorter the battery life. Especially the permanent use of the GPS connection or the pulse sensor are decisive here.

All in all the Mi Band 4* has the nose in front.

Both the Mi Band 4 and the Honor Band 4 are waterproof. Both are rated 5 ATM. Thus both devices are waterproof up to 50 meters. This makes both Fitness Trackers also suitable for swimming. Thus we have no difference in the point waterproof between the two cheap fitness trackers.

None of the fitness trackers has a built-in GPS module. This is also the rule with the size of fitness trackers. There are only a few models like the Samsung Gear Fit 2 Pro* or the Garmin vivosport* that have GPS built directly into the belt.

In the point NFC both fitness trackers have the same problem. There is the Honor Band 4 as well as the Mi Band 4 with NFC, but the use is only possible in China. Contactless payment is not possible outside of China. For most of us the point NFC is obsolete and quite uninteresting.

In my opinion, the app is also always an interesting factor for fitness trackers. Even with the more expensive brands like Garmin and Fitbit this is a big difference.

In comparison between Xiaomi and Huawei, Xiaomi is ahead. The MiFit App is used there. This works as usual with the connection to a cloud. This is not the case with Huawei. Here the app has to be coupled with other services like Google Fit to store the data correctly.

Overall, the Xiaomi app also offers a few more functions and is easier to use.

Both Fitness Trackers are very similar in terms of functionality. But in a few points the Mi Band 4 is ahead. This is especially true for the battery life and the app. For this reason I also recommend the Mi Band 4 from Xiaomi*. In terms of price, both fitness trackers are also in the very cheap segment under 40 euros.

Tags: ProduktvergleichVS, FitnessTracker, Xioami, Huawei The article is written by Lucas B and published on 19.07.2019.