Xiaomi Mi Band 4 vs 3 - Where are the differences? 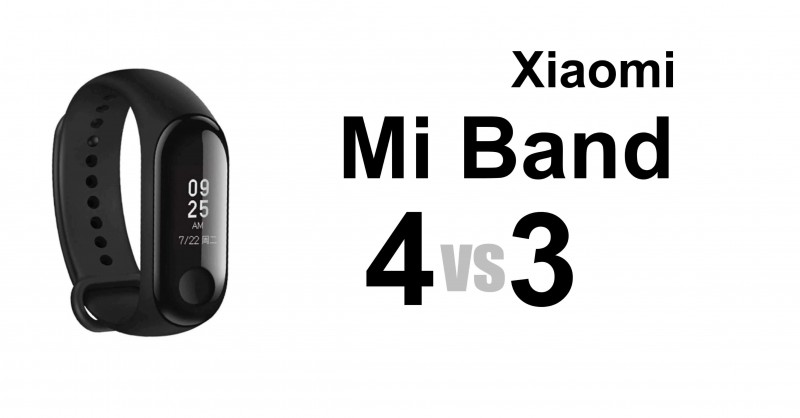 The Xiaomi Mi Band 4 is the successor of the Mi Band 3. In the third version the Mi Band was definitely a very good choice when it comes to a cheap fitness tracker under 50 Euros. This makes the Mi Band an interesting choice especially for beginners. The Mi Band 4 has been a long time in coming and now it raises questions:

Let's take a closer look at the differences and similarities of the Mi Band 3 and Mi Band 4.

At first glance, the display is naturally conspicuous. Compared to the Mi Band 3, the Xiaomi Mi Band 4 has a display that is about 40% larger. An upgrade that is definitely in order. There are hardly any fitness trackers left that come without a display. Even small displays are disappearing more and more. Users want to see and control more and more on the wristbands themselves. Here the Mi Band 4 is gaining ground.

Briefly still to the display. In contrast to the Mi Band 3, the manufacturer has equipped the Mi Band 4 with a colored display. Thus there is also a difference between the Fitbit Charge 3 and the Mi Band 4. The popular Charge 3 from Fitbit only has a display without color.

The weight of the newer Mi Band 4 is slightly higher at 22 grams. The Mi Band 3 weighs only 20 grams. Remarkable or relevant is this however only very small.

The battery life of the Mi Band 3 with up to 20 days was already a blast. Every competitor was outdone with it. In capacity Xiaomi is a little bit more with the Mi Band 4. In numbers:

However, this will hardly be noticeable in the battery life, as the Mi Band has a higher energy consumption. The main reason for this is the much larger display, which can also display colors. You'll know from your smartphone that displays are a big power guzzler.

The battery life will stay the same. Of course, that's not something to complain about in either case.

Furthermore the Mi Band has to be pulled out for charging. A charging on the arm is unfortunately not possible. But this is no criticism of Xiaomi or the Mi Band. There is still no manufacturer that supports this. I would like to have an inductive charge so that the Fitness Tracker can be loaded on the arm and tracked permanently. However, a small icing on the cake.

The Mi Band can still measure steps, floors and the now basic fitness data. However, Xiaomi wants to improve the tracking for itself with the successor.

The Mi Band 4 also recognizes more activities than its predecessor. The new Fitness Tracker recognizes for example cycling, running, hiking as well as many other sports and activities.

Even if many contradict the argument. At this point it should be mentioned that the technologies of the market leaders are better. These include, for example, the Fitbit Charge 3 and Samsung Gear Fit 2 Pro. But the models are more expensive. For the price the Mi Band 4 is still a good choice. Also in the area of tracking.

New is the tracking of swimming units. Although the Xiaomi Mi Band 3 is already waterproof, it had several problems in the water. Tracking the swimming was not possible here. There were also problems with the operation of the display in the water.

The Mi Band 4 stands out from its category. There is the possibility to control music on a smartphone. Only a few small fitness trackers can do that. Even the leading Fitbit Charge 3 can't do that.

I never miss this function myself. But it is a difference to the Mi Band 3.

In addition to the music, Xiaomi smartphones can also be controlled. But the big controls are limited to the own ecosystem. The controls for an iPhone or other Android device are much more limited. Of course there are still notifications.

There's no news on GPS. Furthermore the Mi Band 4 can only use GPS when connected to a smartphone. Thus the Mi Band 4, just like the Mi Band 3, has no built-in GPS in the device.

Personally I find this a little bit sad, because the Mi Band 4 could have stood out clearly from competitors. There are hardly any small fitness trackers with built-in GPS. The two older fitness trackers Samsung Gear Fit 2 Pro and Garmin vivosport are an exception. Whereby the vivosport is optically and in the function hardly an alternative.

The Mi Band 4 is equipped with NFC. However, there are two versions of the Mi Band 4, one with NFC and one without. Officially we will only be able to buy the version without NFC in Europe and the USA.

For us this is quite irrelevant. We cannot do anything with the NFC outside of China and Asia. Thus the joy keeps itself for Europeans and persons outside of China within limits. Payment or access cannot be regulated with the wristband. In China, on the other hand, there are many very practical and nice functions. For example, access control to the train.

However, it could be that there is the possibility for developers to address and use the NFC chip. Then you can at least play with the NFC. For most of us this will not be relevant. Also these problems will have to implement an official payment method.

Compared to Mi Band 3, Mi Band 4 is equipped with Bluetooth 5. The predecessor still has version 4.2 on board. For the purchase decision not necessarily the decisive criterion, but worth mentioning.

Language has always been an issue with the Mi band. At first the Mi Band 4 comes on the market only with Chinese language. English is announced as the next language. After that more languages will follow.

As one of the few small fitness trackers, the Mi Band 4 has a microphone built in. This is also a difference to the Mi Band 3.

A language assistant is available via the microphone, but this is not really possible for Europe and the USA. The language here is limited to Chinese. Thus this bonus is, just like NFC, only reserved for the Chinese.

The bracelet can also be changed on the Mi Band 4. The changeable wristband has established itself very well with fitness trackers, which pleases me personally. The optics can therefore be adjusted quickly and easily.

The selection is usually very large. Due to replicas, the market for cheap bracelets is always growing rapidly. This means that you are no longer restricted to the manufacturer's own selection. Only the device (module) itself is important for the function of the fitness tracker.

Basically the Mi Band 3* would be enough. From my point of view it makes no sense to buy the worse fitness tracker at the low prices. With the Mi Band 4* you get some upgrades, which are worth it.

Small disadvantage: Furthermore you have no built-in GPS and have to work with a connection to your mobile phone. But this is also the case with Mi Band 3 and almost all competitors in the price region up to 150 Euros.

The Mi Band 4 also costs less than 50 Euros*. This makes the Xiaomi Fitness Tracker one of the most affordable devices on the market.

Is it worth to upgrade from Mi Band 3 to Mi Band 4?

In my opinion an upgrade to the Mi Band 4* is worth it. The new fitness tracker looks nicer than the Mi Band 3*. The larger display is responsible for this.

In addition to the look, the Mi Band 4 also trumps with improved functionality. There is the possibility for more control over the band itself as well as optimized tracker of fitness and activity. The swim tracking is also new.

However, there are also points of criticism, which can be expressed on both Mi Bands. That would be first of all the missing built-in GPS. There is only the possibility to use GPS via Smartphone.

In addition, there are restrictions on connections to other fitness apps. Those who like it easy and simple will surely be better served with a device from Fitbit, Garmin or Samsung. The higher price is partly due to the much better app.

Tags: Fitnesstracker, Produkttest, FitnesstrackerVergleich, Xiaomi, MiBand The article is written by Lucas B and published on 11.06.2019. The last update was on 17.06.2019.