Amazon Fire TV Cube vs Fire TV Stick 4K - What are the differences? 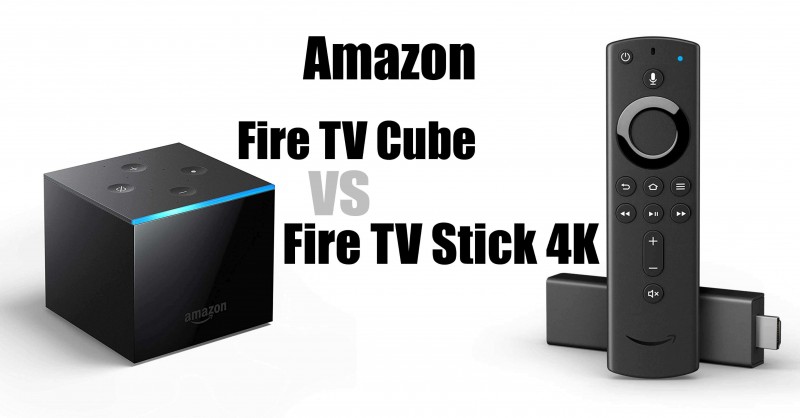 Now the question arises what the Fire TV Cube can do more. Which device is better for you? Is it worth switching to the Fire TV Cube? Let's take a look at the devices in comparison.

Let's have a look at both versions of the Amazon Fire TV Stick and the Fire TV Cube in comparison.

Of course the Amazon Fire TV Cube is much bigger than the Fire TV Sticks. This also makes the sticks much more suitable for transport. If you only want to leave the Cube in one place, this point doesn't matter.

The weight of the Amazon Fire TV Cube is also much higher at 465 grams. The Fire TV sticks weigh only 53.6 grams.

If your playback device does not support UltraHD, that's no problem. In this case, both devices will also play lower resolutions such as 1080p or less. However, if you want the Amazon Fire TV Stick, the smaller version will do. The cheaper Fire TV Stick can only do 1080p, which is the biggest difference between the two sticks.

This makes the TV Cube much more powerful. However, this is more interesting for people who also want to do a little more with the device. For example, the installation of additional apps plays a role. Streaming Amazon Prime or Netflix is possible with all devices without any problems.

All devices do not have a network connection (Ethernet) installed. However, there is the possibility of connecting an Ethernet adapter* for all devices. With the Fire TV Sticks this must be purchased additionally in both cases. The TV Cube included such an Ethernet adapter in the scope of delivery. This is particularly useful if WLAN reception is poor or there is a lot of interference in the household. Of course, this also costs something, which is saved with the Cube.

Another difference between the Amazon Fire TV Cube and the sticks is in the speaker. Only the big TV Cube has one. So the sound can also be played directly via the cube. The Fire TV Sticks pass this on exclusively via HDMI. To connect your 5.1 or other audio system you usually need a HDMI SPDIF converter*.

The big difference between the devices lies in the voice control. Due to the built-in loudspeaker, the TV Cube also serves as a replacement for an Alexa and can accept and process voice commands without a remote control.

Both versions of the Amazon Fire Sticks can only be used with the 2nd generation Alexa remote control. The button for activation on the remote control must also always be pressed.

In addition the Amazon Fire TV Cube has HDMI CEC. This allows the Cube, for example, to control TV sets directly via voice.

Which Amazon streaming device is right for you?

There's no difference in streaming performance or service offerings.

If you use the Alexa voice control, the Amazon TV Cube* can be very interesting for you. Here the voice control is very strong and directly integrated. If you don't have an Alexa, Dot or similar, you can save a device and even money. Because the Amazon Cube offers you both.

An advantage of the Fire TV Sticks is of course their size, because they remain more compact than the Cube. If you want a streaming device on the go, the Fire TV Stick is more your choice. The Fire TV Cube is more intended for static use at home.

In my opinion, a change is only worthwhile if you work very hard with Alexa voice control. If you are thinking about buying an Alexa, you can save some money by buying the Amazon TV Cube* and get a device with a little more power.

If you have an Alexa and an Amazon Fire TV Stick 4K, there's no real reason to switch. You would only combine two devices.

Unsere Bewertungskriterien
Tags: ProduktvergleichVS, AmazonFireTv The article is written by Lucas B and published on 18.09.2019.