buffcoach.net
buffcoach.net
Anmelden
Magazin » Test & Vergleich » Honor Band 5 vs 4 - Where are the differences?

Honor Band 5 vs 4 - Where are the differences? 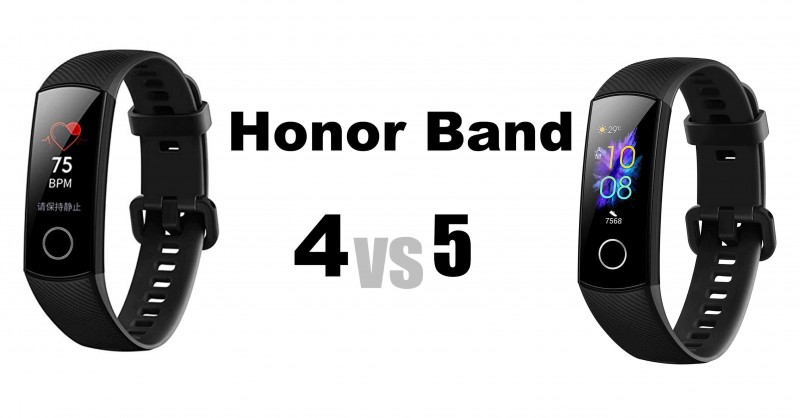 Relatively shortly after Honor Band 4, the Honor Band 5 got released. With the short time, the question arises what exactly is new and where the fitness trackers differed. Which tracker should you buy? Is it worth upgrading to the new Honor Band? All answers can be found in this article.

Differences between Honor Band 4 and 5

The differences between the two fitness trackers are also the novelties of Honor Band 5. The time gap is relatively small, so it's not surprising that the differences aren't enormous.

The manufacturer probably launched Honor Band 5 as a direct competitor to Mi Band 4*. In the comparison between Honor Band 4 and Mi Band 4 the Fitness Tracker of Xiaomi was still ahead.

Both Honor Band 4 and Honor Band 5 are waterproof with 5ATM. So they can be used up to 50 meters in water. Thus the devices are also suitable for swimming. However the Honor Band 5 got some upgrades and offers a better recording.

The SWOLF Index is a noteworthy measurement. This is used to measure the efficiency of a swimming unit. The type of swimming technique as well as strokes during swimming are recorded. Until now, a Garmin had to be used for such a distinctive function. However, I am sure that Garmin is still doing a better job here. Nevertheless, this is a strong thing for the low price.

The big novelty in the Honor Band 5 is the measurement of the oxygen content in the blood. The SpO2 sensor is used for this purpose. With this function Honor Band 5 stands out from Mi Band 4.

Similarities of the fitness trackers

Let's briefly go into a few similarities between the two devices, which could lead to questions.

Optically the fourth and fifth generation of the Honor Band hardly differ. The displays are identical in size with 0.95". Both also have a color display. The weight of the two devices also differs only slightly and is around 23 grams. The Honor Band 5 has no optical advantage.

We could have expected a longer battery life, but that's not the case. This is also one of the major differences to the Mi Band.

Furthermore, the battery life is about 14 days. Thus both Fitness Trackers have the same battery life. Of course, the exact battery life also depends on the use of the device.

The GPS has not changed either. Furthermore the Honor Band can only use the GPS connection of the smartphone. It is not possible to record directly via the Fitness Tracker, because no GPS is installed.

Which Honor Band is better?

Let's come to the first crucial question: Honor Band 4 or 5, which is better? From my point of view the fitness trackers are relatively equal. Only two special differences are worth mentioning. These are better recording of swimming units and measuring the oxygen content.

If you are not a swimmer you only have one relevant function. The measurement of the oxygen content is of course a nice thing. But the Honor Band 5* also costs twice the price. Even if this will probably still fall.

In general you are also well served with the Honor Band 4*. If you are willing to spend a few more Euros, then the Honor Band is a little bit better. But the price is a good bit more expensive.

Is it worth upgrading to Honor Band 5?

If you already have an Honor Band 4, the question arises whether you should upgrade to the new Honor Band 5*. From my point of view it's not really worth it. The difference here is too small, but you would have to pay relatively much. At this point it's worth switching to another brand that offers much more.

Unsere Bewertungskriterien
Tags: ProduktvergleichVS, Fitness Tracker, Huawei, HonorBand The article is written by Lucas B and published on 25.07.2019.