buffcoach.net
buffcoach.net
Anmelden
Magazin » Test & Vergleich » TheraGun G3PRO vs G3 vs liv - Where are the differences?

TheraGun G3PRO vs G3 vs liv - Where are the differences? 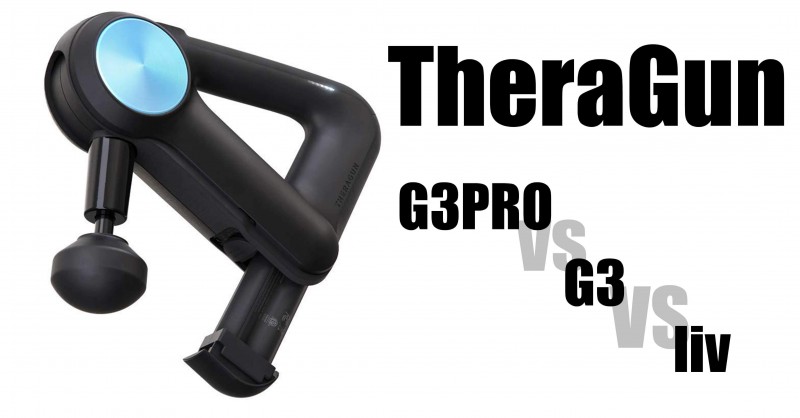 TheraGun was one of the first manufacturers of massage pistols and is still a very good brand. In the assortment there are however different executions. These are TheraGun G3, TheraGun G3PRO and TheraGun liv. Through the prices it is clear which device can do the most. But where exactly are the differences?

Already the price shows that the TheraGun G3PRO is the elite model with the most performance. The TheraGun liv is designed for the simplest application.

All three models differ in maximum power. The G3PRo offers up to 27kg. The G3 up to 18kg and the liv up to 14kg. The stroke length of all three models is 16 mm.

Only the TheraGun G3PRO offers an exchangeable battery. Two batteries are also included. The G3 and liv have a built-in battery. This means that the device cannot be used any longer when the battery is empty. The complete device has to be charged there. There is also no possibility to buy further batteries for the smaller variants.

The battery performance of the three models also differs. The G3PRO is clearly ahead with 75 minutes per battery. The G3 has a battery life of 60 minutes and the TheraGun liv only 45 minutes.

The G3PRO stands out from the other two models with an adjustable arm. This gives you better accessibility to all places. In my opinion not absolutely necessary. But it's a feature that sets the G3PRO apart.

Which TheraGun is best for you?

Let's come to the crucial question: Which TheraGun should you buy? In my opinion, the TheraGun G3PRO* is only relevant for professional use. I am thinking of practices of physiotherapists or something similar. The exchangeable battery and the longer battery life can be particularly advantageous there.

For normal use, a battery life of 60 minutes with the TheraGun G3* is completely sufficient in my opinion. If you are interested in the larger selection of attachments, you can also buy more for the G3.

The TheraGun G3 is the best choice for most. It offers the most advantages and is cheaper. The TheraGun liv*, on the other hand, has a few limitations, but isn't bad either. There, however, you are limited to two attachments and have a battery life of only 45 minutes as well as only one step at the speeds. That's why I recommend the TheraGun G3*.

Tags: ProduktvergleichVS, Massagepistole, TheraGun The article is written by Lucas B and published on 19.11.2019.