Fitbit Charge 3 vs Xiaomi Mi Band 3 - Which is better? 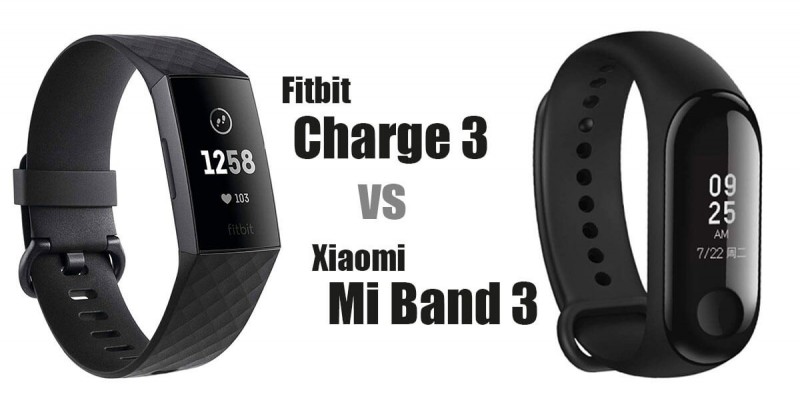 If we compare the Fitbit Charge 3 and the Xiaomi Mi Band 3, we speak of two very different price ranges. Fitbit is over 100 Euro and Xiaomi under 30 Euro. However, it doesn't mean that Charge 3 is necessarily better. Let's take a closer look at the question.

Where are the differences between Fitbit Charge 3 and Xiaomi Mi Band 3?

A comparison of the two fitness trackers quickly shows that the differences are relatively small.

Both devices, the Charge 3 and the Mi Band 3, have a pulse sensor. Fitbit was one of the first manufacturers to offer a permanent heart rate monitor. This is elementary for meaningful use. An hourly pulse measurement brings already clearly less expressiveness with itself.

Like every Fitbit Fitness Tracker, the Charge 3 measures in an interval of 5 seconds. In training mode, the frequency is raised to every second.

The Xiaomi Mi Band 3 also has the possibility of a permanent pulse measurement. The frequency can even be changed individually by the user. However, this is not possible with every app.

With both devices an increased measuring frequency has a negative effect on the battery life.

With both devices there can be small interruptions of the measurement. However, this is not reprehensible and as good as any fitness tracker for the wrist. Considering the fact that the Fitness Trackers are worn on the arm and the technology of the measurement this is understandable. This is not problematic.

In summary, both manufacturers, Fitbit and Xiaomi, make a good picture here.

The point GPS is with both manufacturers a small point of criticism. Because both devices, Charge 3 and Mi Band 3, have no built-in GPS module. Both fitness trackers can only use GPS in combination with the smartphone.

For example, if you want to record your running track, you have to take your mobile phone with you when using both Fitbit and Xiaomi. Personally, I don't find that tragic, because I carry my phone with me for the music anyway.

GPS is generally a point of criticism at Fitbit, because only the top model Ionic has a built-in GPS module.

When it comes to GPS, the Charge 3 and the Mi Band 3 are up in the same way.

Charge 3 and Mi Band 3 are both waterproof. In both cases 5 ATM applies. That means waterproof up to 50 meters. Both fitness trackers are suitable for swimming.

For a long time this point was a reason for alternative to Fitbit. A big difference between the Fitbit Charge 2 and 3 is exactly this point. Only the Charge 3 is officially waterproof. So there is no reason against Fitbit here.

On the whole, the Xiaomi Mi Band 3 and the Charge 3 are on the same level here. Whereby the Mi Band 3 has some problems with the touch when the display is wet. Here Fitbit is a small step ahead.

The Mi Band 3 looks a bit smaller than the Charge 3. However, both devices are very compact and make a discreet impression on the wrist.

The Fitbit Charge 3 weighs 29 grams, which is slightly more than the Charge 3. The Mi Band 3 has a weight of 20 grams. From my point of view however no appreciable difference.

There is no colour display on either Fitness Tracker. The condition per touch, however, is given with both machines.

Personally, I find the Charge 3* visually more appealing and elegant. Of course, this is a question of taste. The advantage of both fitness trackers is the possibility to change the bracelet. Both for the Charge 3 and the Mi Band 3 there is a huge selection of cheap bracelets.

The price difference is reflected in the point of the app and user friendliness. The Fitbit app is much easier to use and clearly better for the user.

The Fitbit app also stands out clearly from other manufacturers such as Garmin and Samsung. One reason might be that fitness trackers are Fitbit's core business. This is where the manufacturer does its job really well.

At Fitbit, however, there are no third-party apps. You have to work with the app from the manufacturer. With Xiaomi it looks a bit different. There are open interfaces here, so that other developers can also develop apps for the Mi Band. So there are a few more applications here. Nevertheless, the usability of the Fitbit app is much better.

Especially for people who like it easy, Fitbit is better suited. The application offers exactly what you expect and you get to all points in just a few steps.

Also the notifications are a bit more pronounced with Charge 3. It is even possible to answer directly via the wristband. However, these are only short answers. Overall, the smart connection of Charge 3 is somewhat more complex.

Support from Fitbit is also a big factor. The employees react very quickly and reliably. If you have any questions, you can contact Fitbit via ticket or Facebook. There is always a quick answer.

In case of big problems with the Fitness Tracker, there is usually a replacement very quickly. Fortunately, I didn't have to apply for a replacement myself. However, acquaintances have already taken part in the process. Everything worked perfectly. With a reason for the higher price and an argument for Fitbit.

A comparison has shown that the differences are very small. In terms of battery life, the Mi Band 3 is clearly ahead. In terms of appearance, user-friendliness and, to some extent, use in water, I think Fitbit is ahead of the pack.

In terms of time, the Mi Band 3 is also considerably older than the Charge 3. So the Mi Band 4 is exciting.

If you want to invest less money the Mi Band 3 is sufficient. Here you are under 30 Euro*.

However I recommend the Charge 3* because of the easier handling. More expensive with more than 100 Euro*. Support and a very good app are one reason for this.

A permanent change between two manufacturers is by the way hardly possible, since all keep their systems quite closed and also not completely identically record. This doesn't only concern Xiaomi and Fitbit, but also competitors like Garmin, Samsung, Apple or Huawei.

Since the Xiaomi Mi Band 3 is a cheap device, a little hint to the very cheap fitness trackers from China, which I strongly advise against. There is meanwhile a quite large selection of very favorable devices, which promise much according to the descriptions. These are especially YAMAY* or Willful*.

Optically the devices look very similar to the fitness trackers of the good and respectable brands. The function is different. As a rule, the promises hardly work, if at all. The second point is data protection and reliability. Data protection is not very important in Asia. I don't want to say any more about that. In terms of reliability, it can happen that the Fitness Tracker apps are switched off.

For example, the devices appear high up on Amazon because the dealers are not helping in a completely legal way. I just want to give you this as a hint to save them from disappointment. I don't want to go much further on this topic.

From my side, there is a clear victory for Fitbit in the application point. From my point of view this is also the reason for the higher price. The development of such software also entails costs.

A switch from Mi Band 3 to Charge 3* is definitely worthwhile from my point of view. If you have noticed that fitness trackers are a nice thing and you have found fun with the material, you will have a lot of fun with the Fitbit. If you want to spend a little less, you can also take a look at the slightly smaller Fitbit model, the Inspire HR. The differences between the Inspire HR and Fitbit Charge 3 are relatively small.

I don't think it's advisable to switch from Fitbit Charge 3 to Mi Band. With Charge 3 you have basically chosen the slightly better model and would take a step back. Then it makes more sense to upgrade to the Mi Band 4. You can also take a closer look at the differences between Mi Band 3 and 4.