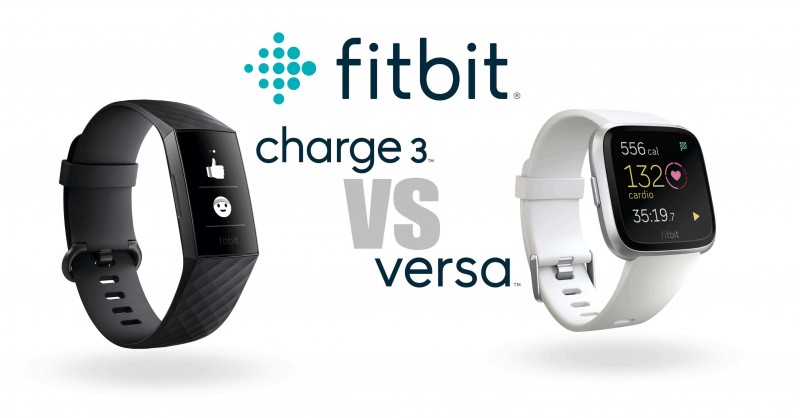 With the Versa, Fitbit has brought an incredibly successful fitness tracker onto the market, which can already be established in the field of Smartwatch. A little later came the Fitbit Charge 3, the successor of the very popular Charge 2. I already had these two in comparison.

Now it's about the Versa* and the Charge 3*. The question arises which model is better here. Charge 3 or Versa.

Similarities between Fitbit Charge 3 and Versa

Despite the difference in price, both fitness trackers have some things in common. I would like to introduce these to you as well.

Both fitness trackers come with a pulse sensor. It is hardly necessary to mention it, but I would like to point it out. A fitness trainer without permanent pulse measurement is almost useless.

The Charge 3 and the Versa are both operated by Fitbit with the in-house PurePulse technology. With this technology Fitbit has been convincing for a long time now. You can find out more about how it works on the manufacturer's website.

Of course, 24 hours is measured here, permanently. In normal mode, both devices measure every 5 seconds. If the training mode is activated, the interval is reduced to every second. This ensures a higher accuracy.

Both the Fitbit Charge 3 and the Versa do not have an integrated GPS. However, both can connect to the smartphone and use the GPS signal from this device. The whole thing is called Fitbit Connected GPS.

Up to now Fitbit has only installed a GPS module on one device. That was with the Fitbit Ionic. Presumably this is due to the higher battery consumption.

After a long time wish of the users and fans of Fitbit, the manufacturer has made the Charge 3 waterproof. A point, which was criticized for a long time in Charge 2. The Fitbit Versa is also waterproof.

With both trackers you can go up to 50 meters under water. This makes both devices suitable for swimming, which is also supported by both trackers. So you can also count the lanes while swimming.

Of course you can take a shower with both trackers without any problems.

The Asians have also discovered this market for themselves and started to build bracelets for Fitbit devices. I recommend to buy them. I already reported about my imitated bracelet from MoKo for Charge 2.

Since Versa there is also NFC (Near Field Communication) on board of Fitbit. Fitbit has also built this into Charge 3. This enables contactless payment via the trackers. To be able to use this feature you have to use the more expensive Special Editions in both cases. You can read more about NFC on Wikipedia.

We also have no differences in compatibility between Charge 3 and Versa. Both fitness trackers are compatible with Android, iOS and Windows.

The question of how to use the sauna is also more frequent. Here I can point out the operating temperatures. Fitbit specifies a range of -10 to 60°C for Charge 3, as well as for Versa. This is not enough for use in the sauna, as the temperatures are much higher here. The manufacturer himself does not give a green light for the use of trackers in saunas.

The differences between Charge 3 and Versa

Let's talk about the differences between Charge 3* and Versa*. In comparison not only the price is different.

Of course, it is immediately noticeable at first glance. The Charge 3 and the Versa have a completely different style.

In comparison it is clearly noticeable that the Fitbit Charge 3 is much more a fitness tracker. It is slimmer and narrower. On the wrist it is much more inconspicuous and discreet. A point that I already liked about the HR and Fitbit Charge 2. Here Fitbit has remained true to itself.

If we look at the Fitbit Versa, we have a much bigger watch. The tracker is still quite small and discreet. But compared to the Charge 3 it is much more conspicuous. With the Versa I would rather speak of a smartwatch.

In the target groups, I see the Versa more in everyday life and the Charge 3 more among athletes.

At the battery life point, we have another difference between Charge 3 and Versa. The smaller device, Charge 3, is advertised by Fitbit with a battery life of up to 7 days.

The Fitbit Versa on the other hand is advertised with at least 4 days. The reason for this is certainly the difference in the display size as well as the general size of the devices.

Those who still own or even use a very old Fitbit model can be reassured at this point. With both devices, also with predecessors, Fitbit clearly worked on the battery life. I myself am very satisfied with how the topic developed at Fitbit.

In connection with the battery life, the focus is of course also on the charging station. Fitbit has a separate station for each device. I don't quite understand why the manufacturer does this, but it does.

According to Fitbit, both devices take 2 hours to fully charge. So we have no difference here.

In the comparison of the hardware we have still another difference with the devices. The Fitbit Versa allows you to store music on the device and listen directly to it. You don't need a connection to your smartphone. The headphones can also be paired directly with the Versa. This is not only possible with the Fitbit Flyer, but also with any other Bluetooth headphones. Charge 3, on the other hand, doesn't have this option.

But don't forget that both devices don't have an integrated GPS. So even with the Versa, you're not completely free of your smartphone. At least not if you want to record your route via GPS.

In addition to playing music, Versa also offers a few other smart features. You can also install apps on the Fitbit Versa. The selection here is quite small, because Fitbit built his own system and didn't switch to Android. But there is also the possibility to write your own apps for Fitbit. For most of us this will be uninteresting.

On the Versa you can also use quite many and even own dials. A nice gimmick, which further individualizes the look of the Versa. With Charge 3 you can only choose from a preselection of Fitbit and not install any apps.

However, you can receive notifications on both devices. WhatsApp, emails and calendar entries can be brought to your arm via Charge 3 and Versa. Smart answers, on the other hand, are only possible with Versa.

In the comparison between the Charge 3 and the Versa one notices that Fitbit of the Versa has installed a WLAN module. From my point of view, however, this is not really important and decisive for your purchase decision. The module is used on the Versa for a few smart functions on the clock.

Of course the devices differ in price. The Fitbit Charge 3 is about 150 Euro. For the Fitbit Versa on the other hand you have to put 50 Euro more, i.e. about 200 Euro on the table.

With the Versa, I was already happy about the relatively low price. With the previous larger model, the Fitbit Ionic, I found the price quite high in comparison. The extra price for the Versa compared to the Charge 3 is certainly due to the difference in design.

Fitbit Charge 3 or Versa - Which fitness tracker is right for you?

Both devices are definitely good and suitable for use as fitness trackers. In short, the Charge 3 is more of a fitness tracker and the Fitbit Versa is more of a Smartwatch. So for me the decision lies in your lifestyle. Are you more likely to find yourself doing sports or is the chic part dominating your life?

For athletes I can definitely recommend the Charge 3* more. It is simpler and more compact. So the device is less disturbing during training or any sport.

The Versa*, on the other hand, makes a very chic look in the office or everyday life. If this is more important for you, then the 50 Euro surcharge can definitely be worthwhile for you and the Fitbit Versa is the right choice for you.

The two devices do not differ in the important functions and features for a fitness tracker. The Fitbit Versa offers only a few rather smart features. These include, for example, storing and playing music directly from the device as well as installing and using your own apps. On the other hand, compared to Charge 3, the Versa has a worse battery life.

Fitbit Charge 3 or Versa - What have I done?

Maybe an exciting question for you - What did I do? Fitbit Charge 3 or Versa? How did I decide?

Personally, I am the sporty type and more to be found in the studio as well as during any sporting activities. That's why I decided to go for Charge 3*. At first I also wanted to buy the Fitbit Versa when the model came onto the market. But shortly thereafter the Charge 3 had already announced itself, which brought me to the Charge 3.

Now you're wondering not only whether Charge or Versa, but which Charge? I can also help you with my comparison of Fitbit Charge 2 and 3.

Meanwhile there is also the Versa Lite. In the comparison of the Versa and Versa Lite you will find the differences of the variants.

Tags: The article is written by Lucas B and published on ok.