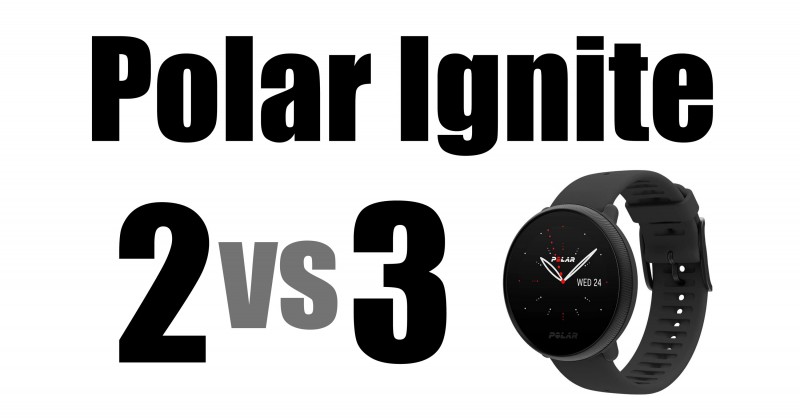 Let's start with the most obvious things: The looks. The design of the two watches is kept quite similar. Both have a size of 43 x 43 millimeters. In terms of thickness, however, the Polar Ingite 2 and 3 differ slightly:

However, this is hardly worth mentioning. The weight is identical with about 35 grams for both models. Depending on the band, the weight is of course higher.

In the point GPS Polar has also made some progress. Although the Polar Ingite 2 already has built-in GPS on board, but in the third generation, the Polar Ingite 3, there is Dual-Band GPS. Thus, an even higher accuracy is offered in the location by GPS.

When it comes to battery life, the Polar Ingite 3 performs better despite its AMOLED display. The battery life is up to 30 hours in training mode. The reason for this is the larger battery with 215 mAh. The Polar Ingite 2 creates here only 20 hours with a battery of 165 mAh.
In energy-saving mode, there are still no differences in the comparison according to Polar. Both create here up to 200 hours. The same applies to the smartwatch mode. Here both models create up to 120 hours.
However, most with a Polar Ingite 2 or 3 will be perfectly fine with a battery life of up to 20 hours. Athletes with longer sports sessions will probably rather reach for a Garmin Fenix 7 or comparable sports watches.

If we compare the range of functions of the Polar Ingite 2 and 3, the successor can collect a few plus points. New are:

The selection of new features is not bad. This also justifies the higher price for the successor. By the way, a music control is supported on the Polar Ingite 2 and 3. However, the music can not be loaded onto the watch. In both cases, only the smartphone is controlled.

Which Polar Ingite is better?

Clearly, the Polar Ingite 3* is the better choice of the two watches. There is a much better display (AMOLED), more resolution and even a bit more battery life. The dual GPS also speaks for the Polar Ingite 3.

However, much more important in my eyes are still the new features, which are not available in the Polar Ingite 2. The Polar Ingite 3 is thus clearly more a smartwatch, as the predecessor.