Fitbit Versa vs Versa 2 - Where are the differences? 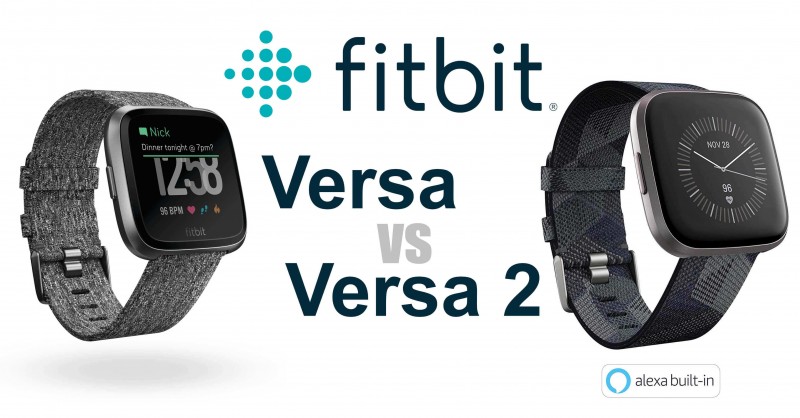 The Fitbit Versa 2 is the successor of the Fitbit Versa, which was a great success. Questions arise, which we clarify in this comparison:

Furthermore the Versa 2, like the Versa, remains the larger version of the Fitbit Versa Lite. The Versa Lite continues to be part of the brand's range.

The most exciting and probably the biggest upgrade is the built-in microphone in the Versa 2. The microphone now allows you to use voice control via the clock. But the Versa 2 doesn't have a loudspeaker. Therefore there are no answers to the voice control and voice messages cannot be listened to.

The Alexa voice control will be meanwhile everyone a term. It is a service from Amazon, which allows the control of various actions by voice. In addition the filling of shopping lists, shopping itself or also control of smart devices in the household.

To use this function you need an Amazon account. You don't need an Amazon Echo or Amazon Dot, which are otherwise used for voice control. Many people don't know it, but you could also use Alexa purely via your smartphone.

However, the system has a small disadvantage. To use Alexa with your Fitbit Versa 2, your smartphone must be within range and connected via Bluetooth. The voice commands cannot be processed directly on the clock. That limits the use a little bit.

The other point is the voice messages. Even with the Versa and other Fitbit devices, you could send quick responses to messages directly from the clock. Now the system has been expanded and you can also reply by voice message. For many voicemail fans, this is certainly a really nice thing. But keep in mind - You can not listen to voice messages. The Versa 2 has no speaker.

With the Versa 2 Fitbit finally introduces the intelligent alarm clock. A function that I've wanted for a long time.

Your Fitbit will wake you up within 30 minutes. Within these 30 minutes the perfect moment is waited. The background is based on the sleep phases. There are four of them, which last a total of 30 minutes. So you are no longer awakened in deep sleep, but in your light sleep phase. This helps you to be much more awake throughout the day and to get out of bed better. I have used an app for this so far and can only report extremely good experiences.

Here is another positive news. The function will soon be available on other Fitbit devices. This will also serve owners of the older Fitbit Versa*.

In addition, you can still store up to 300 songs directly on the clock. Like the Versa, the Versa 2 has an integrated music memory of 2.5 gigabytes. Deezer is still available.

At the point of battery life, it's not quite clear whether Fitbit has added here. In the press release the manufacturer speaks of at least 5 days. In the advertising of at least 4 days. The Versa had indicated here 4 days.

Fitbit says to the Versa 2 that the performance has been optimized. The watch should be faster in the condition and run more reliable. The display has been slightly enlarged and the colours improved.

Let's briefly go into some important points, which are offered by both the Fitbit Versa and the newer Fitbit Versa 2. Of course, this is limited to the relevant things.

Already the Versa had reliable and permanent pulse measurement. This is of course still the case with the Fitbit Versa 2.

Furthermore the Fitbit Versa 2 has no build in GPS. As with the Versa there is the possibility to use connected GPS. The connection to the smartphone is used and you can record distances in this way.

Like the Versa, the Versa 2 is waterproof. Also up to 50 meters. This makes the watch also suitable for swimming. The lanes are also recorded. What this looks like you can see in my report about swimming with the Fitbit Charge 3 and Versa.

Should you buy the Fitbit Versa 2?

Let's come to a very interesting question: Is it worth buying the Fitbit Versa 2? From my point of view, the main differences relate to the software. With the Versa 2* you get:

The intelligent alarm clock is also an upgrade, but will also be rolled out on the old Versa. So this function doesn't count as an argument.

If you want to save a little more there is the Versa Lite*. The device was not so successful. I wouldn't prefer it to Versa myself. You can find more about this in the comparison between Fitbit Versa and Versa Lite.

Is it worth upgrading from Fitbit Versa to Versa 2?

If you already own the Fitbit Versa, you might want to upgrade to the Versa 2*. Basically, the same arguments count here as for a new purchase. If you don't need voice control or Spotify, it doesn't make sense to change. You will also get the intelligent alarm clock on the Versa. With that I would say that an upgrade is hardly worth it.

You shouldn't make this decision dependent on the wristbands. Only the Smartwatch itself is relevant. Also here there are colors on the case. However, the bracelet can also be changed on the Fitbit Versa. This allows you to change the look of the watch a lot. There is also a huge selection of imitation wristbands for the Fitbit Versa, which are also much cheaper. I have already had good experiences with these.

Unsere Bewertungskriterien
Tags: ProduktvergleichVS, Fitness Tracker, Fitbit, Versa The article is written by Lucas B and published on 29.08.2019.