Fitbit Versa 2 vs Ionic - Which is better? 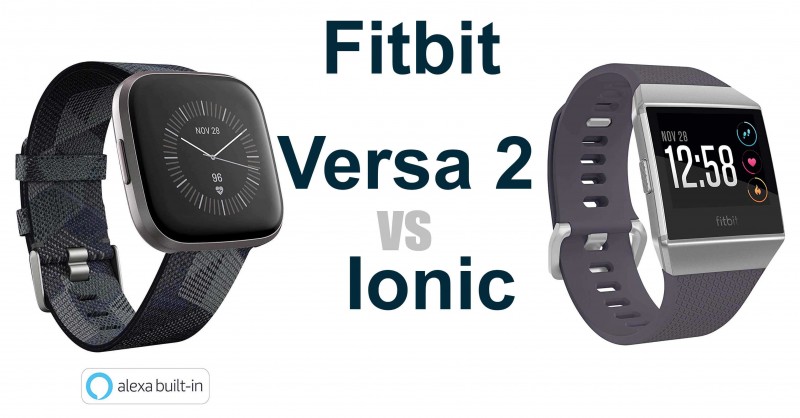 Like the Fitbit Ionic, the Fitbit Versa 2 is one of the smartwatches of the Fitbit brand. The Versa 2 is the newer model which raises questions: Where are the differences? And which Fitbit is better for you?

Differences between Fitbit Versa 2 and Ionic

Compared to the Versa 2, the Fitbit Ionic is still the more expensive model. But the differences are small. Both devices have their advantages. It depends strongly on your requirements.

The biggest difference between the Fitbit Versa 2 and the Ionic is the GPS. The Fitbit Ionic is currently the only Fitbit device with a built-in GPS. This allows the Ionic to record distances completely without a connection to the smartphone.

The Versa 2 only supports connected GPS. The Smartwatch must be connected to the smartphone to use GPS.

If you don't need a GPS or if the GPS is enough for you in combination with your smartphone, then the Versa 2* is definitely enough.

The Versa 2 also has an advantage over the Ionic. There you get a built-in microphone. Via the microphone you have the possibility to use the Alexa voice control. You can also reply to messages by voice message.

However, there is still a small catch. Because the Fitbit Versa 2 has no loudspeaker on board. So the watch can't play a sound. Answers to the voice control or listening to voice messages is not possible with it.

From my point of view this upgrade is not very mature. Therefore I recommend Versa 2 instead of Versa 2. This way you can save some money. The differences between the Versa and Versa 2 are quite small.

In contrast to the Ionic the Versa 2 has the possibility to activate an Always-On-Display. You get this function only with the Versa 2, not with the older Versa or Versa Lite.

However, this also affects the battery life. If the Versa 2 is in Always-On mode, it will only last 2 days.

The battery life is according to information on the side of Fitbit with the Ionic with 5 days higher. The Versa 2 is signposted with 4 days. In the press release, however, the manufacturer also speaks for the Versa 2 of 5 days.

The Versa 2 and Ionic also have a lot in common. Let's briefly discuss the points that are relevant. This can be quickly processed in a list:


Fitbit Ionic or Versa 2 - Which is better for you?

Let's look at the price, the Fitbit Ionic is still much more expensive. With the Ionic you only have the advantage of a built-in GPS and can use the watch self-sufficient from your smartphone. So if you need GPS directly on the watch you have to buy the Fitbit Ionic*.

The Versa 2 features an Always-On display, voice control and voice messages. If you don't need GPS, the Versa 2* is the cheaper alternative for you. If you want to save even more and don't need these three things, the older Fitbit Versa* is a good choice. You can also check out the differences between the Versa and Versa 2.

The Fitbit Versa Lite* is even cheaper, but I don't recommend it. The sales figures of the model were not convincing either. You can also take a look at the comparison between Versa and Versa Lite.

Tags: ProduktvergleichVS, Fitness Tracker, Fitbit, Versa The article is written by Lucas B and published on 01.09.2019.