Fitbit Charge 3 vs Versa 2 - Where are the differences? 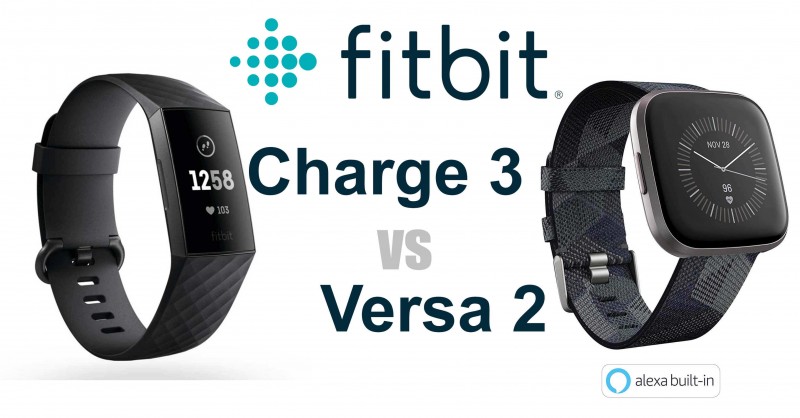 There are not only optical differences between the Fitbit Versa 2 and the Fitbit Charge 3. The two fitness trackers also differ in technology. Let's take a look at the devices in comparison and decide which Fitbit is more suitable for you.

The two devices are clearly visually very different. The Fitbit Charge 3 is more of a compact fitness tracker and very slim. The Fitbit Versa 2 looks more like a watch and is also used as a Smartwatch for this reason.

The size of the displays differs. This is noticeable at first glance. In addition, the display of Charge 3 is elongated. That of the Versa 2 is rectangular. The Versa 2 also has a color display, which is not the case with the Charge 3. There we have a black and white display.

An advantage or rather a possibility with the Versa 2 is the Always-On-Display. This is also not the case with the Charge 3. However, the clearly shorter battery life has to be considered here. This drops to 2 days.

In connection with Fitbit, the GPS point is always a big question. But both devices are equipped the same. Both the Charge 3 and the Versa 2 have no built-in GPS.

Both need a smartphone to record GPS. This is called connected GPS. The GPS module of the smartphone is used via Bluetooth.

This does not bother me personally. Others find this a little sad. If you want a Fitbit and GPS, you have to use the Fitbit Ionic*. You can also take a look at the comparison between Versa 2 and Ionic.

With the Fitbit Charge 3 this is less of a problem than with the Versa 2. On the Versa 2 you can also store music and listen directly from there. But due to the missing GPS you are not self-sufficient from your mobile phone.

The Fitbit Charge 3 is ahead in battery life. The small Fitness Tracker has a battery life of up to 7 days. That's because it doesn't have a color display and the display itself is much smaller than on the Versa 2. The Fitbit Versa 2 offers up to 5 days here.

Both devices are identically waterproof. Both Fitbit can be used up to 50 meters under water. There is no time limit here. Both devices are also suitable for swimming and can record lanes.

The Versa 2 performs slightly better with the smart functions. Both fitness trackers can inform you about messages, calls and a few other things.

In contrast to Charge 3, the Versa has 2 Alexa integrated. Most people will know the voice control from Amazon. With the Versa 2 you can control your smart ecosystem. For this you need an Amazon access.

However, I don't see this point as a purchase criterion. For me, this is a gimmick that hardly has any advantage and in my opinion is used by the fewest. I myself wouldn't be willing to pay a higher price for it, even if I find voice control interesting and use it myself.

The Versa 2 has a built-in memory which can be used for music. This is not the case with Charge 3. With the Versa 2 you can also control the music directly via the clock. This is also not possible with Charge 3.

With the Versa 2 you also get the possibility to use the services Spotify and Deezer.

On Versa 2 you also have the possibility to install third-party apps. In contrast to Apple Watch or Smartwachtes with Android there are fewer apps. The reason for this is the own operating system Fitbit OS. There aren't many developers who are interested. There are no apps on Charge 3.

Which Fitbit Tracker is right for you?

Let's get to the question which Fitbit Tracker is right for you. Basically, you have to decide whether you want a bigger watch or a smaller Fitness Tracker.

Personally, I prefer the compact and simple Fitness Tracker - the Fitbit Charge 3*. If you want some more smart features and music right on the clock, you'll need to choose the Fitbit Versa 2*.

However, you should definitely check out the differences between the Fitbit Versa and Versa 2. The older Versa* might be sufficient, as it offers almost everything that the Versa 2 has. But you'll save on the price.

It looks different with the Versa Lite*, which I would not recommend. You can see more about this in the comparison between the Versa and Versa Lite. Also to the older Versa there is a comparison to Charge 3: Differences Fitbit Charge 3 and Versa.