Garmin Venu vs Apple Watch Series 5 - Which is better? 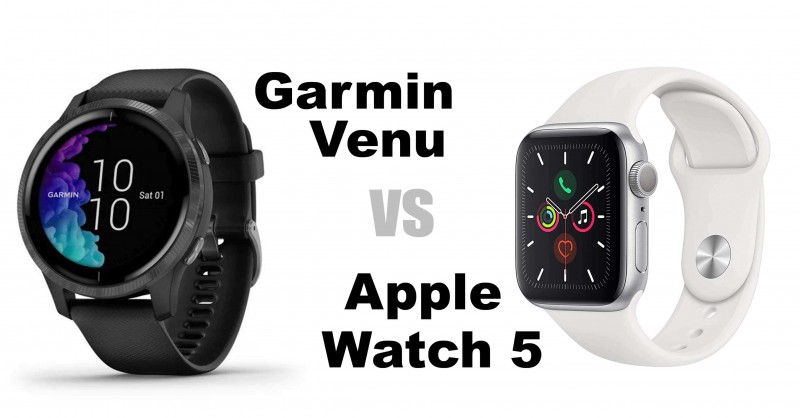 With the Garmin Venu, the well-known manufacturer of sports watches has launched the first real Smartwatch on the market. This makes the watch interesting for comparison with the Apple Watch 5. The Apple Watch has long played an important role in the field of smart watches. Is the Venu a competitor? Where are the differences? Which watch is better for you??

The Garmin Venu and Apple Watch 5 also have a few things in common. But the watches differed a lot. Let's look at the relevant differences in comparison.

One of the biggest differences between the two devices is the battery life. The Garmin Venu is clearly ahead. Like its predecessors, the Apple Watch 5 has a rather short battery life.

By the way, the battery life of the Apple Watch 4 is not worse. You can read this in the comparison of the Apple Watch 4 and 5. In general the Garmin Venu offers a big advantage in practice. The significantly longer battery life of the Garmin Venu is especially interesting for runners. However, the time data with GPS are always somewhat inaccurate. Depending on other functions (e.g. music) the time is even lower.

But the Apple Watch 5 also has an advantage. This is available with the LTE option. You can use the watch completely without a mobile phone. Messages can be sent purely over the clock. This variant costs however also a little more.

GPS have both devices built in. However, you have to do without GLONASS and GALILEO with the Apple Watch 5. The two more accurate positioning systems are only available from Garmin Venu. This is of course an advantage for the accuracy. However, GPS is sufficient for most.

A special feature of Garmin watches has always been ANT+. Only a few manufacturers offer to connect a pulse belt to the watch. With the Apple Watch 5 this is not possible. Again an advantage from which especially runners and also sportsmen in general profit with the Garmin Venu.

Interestingly, you can also use Stryd and RunScribe with the Apple Watch 5.

At the Garmin Venu, you'll get another pulse oximeter. This allows the watch to measure the oxygen content and evaluate your stress level. This is also very interesting for sleep analysis. With the Apple Watch 5 (and also 4) you do not get these measured values.

With both clocks you can pay contactless. But both clocks use their own system. With the Apple Watch this is logically Apple Pay. Garmin uses Garmin Pay for the Venu, like all other Garmin watches. In practice, Apple Pay is somewhat better and more mature here.

Sleep analysis is also available from Apple. But here the battery life is a small problem. With only 20 hours it becomes difficult to get the complete analysis. Garmin makes here with the Venu a clearly better picture.

A special feature of the Garmin Venu is the display. This also sets the Venu apart from the vivoactive 4. The difference between Garmin Venu and vivoactive 4 lies exactly in this point. The Venu has a higher resolution and is therefore much more interesting for use as a Smartwatch.

The operating system of the Apple Watch 5 is also simpler than that of Garmin. The user interface is more sophisticated and more accessible for everyone. A point that has made Apple great in general and sets it apart from other brands.

There are also more apps for Apple. One reason for this is of course the much longer presence on the market. The App Store has grown over the years. Garmin hasn't been active in this area for that long.

Both watches are water resistant with 5ATM. Thus the devices lie here immediately on. You can also swim with both.

However, the Apple Watch 5 unexpectedly offers an advantage here. You can also record open water swimming with the Apple Watch. The Garmin Venu only offers swimming units in the swimming pool. Means you can only record fixed lengths of lane.

Which watch is better for you?

It depends a bit on the use which watch is better for you. However, there are two key messages that can be made:

The Apple Watch 5 convinces with a simpler operation and a slightly better resolution. Apple Pay is also a little more mature and you generally get more apps for the watch.

The Garmin Venu offers the big advantage in battery life. This makes the Venu much better for use in sports.

You also get more precise tracking with GLONASS and GALILEO. With Apple you only get GPS. You can also connect a pulse belt (ANT+) to the Garmin Venu. This allows a more accurate heart rate measurement. With Apple, you are limited to wrist measurement.

I also see a big advantage in the sleep recording, which is also much better with the Garmin Venu. Here the Garmin Venu trumps also still in the point of the technology. You get a Pulse Oximeter. With it the oxygen content can be measured and your stress level can be evaluated. Apple does not have this data.

Something more special, but still worth mentioning is golf. This sport has long been strongly supported only by Garmin. The Garmin Venu has special functions to record the golf finenesses and to improve them.

If you are more of an athlete, then I recommend the Garmin Venu*. In this context you can also think about the Garmin vivoactive 4*. You can find more about this in the comparison of Garmin Venu and vivoactive 4. Here you can save some money.

If you are only moderately on the move in sports and attach more importance to the functions of a Smartwatch, then the Apple Watch 5* is your choice. Here too, it's worth taking a look at its predecessor*. The differences between the Apple Watch 4 and 5 are not that big. The price difference, on the other hand, is more.

Tags: ProduktvergleichVS, Garmin, Smartwatch, AppleWatch The article is written by Lucas B and published on 01.12.2019.