Fitbit Charge 4 vs Versa 2 - Which is better? 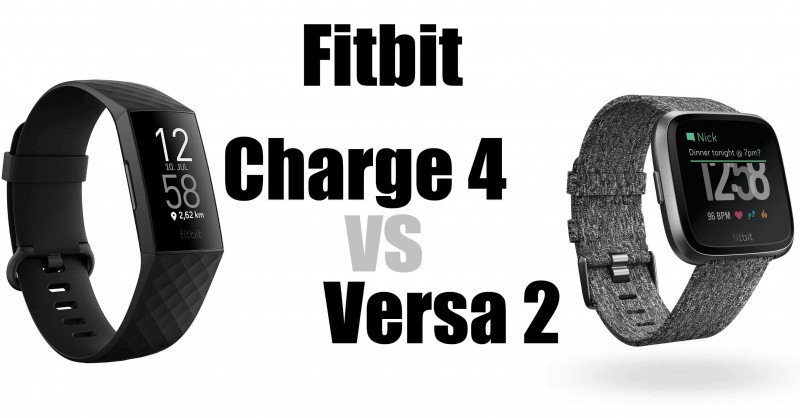 The Fitbit Charge 4 and the Fitbit Versa 2 do not only differ in appearance. There are also differences in terms of technology. Let's take a look at the two fitness trackers in comparison and decide which one is the better choice for you.

It is very obvious: The Fitbit Versa 2 is larger and therefore heavier than the Fitbit Charge 4.

All in all, the Versa 2 also comes more after a watch. The Fitbit Charge 4 is a fitness tracker and works like one. It is narrow and long built. What you like better is of course a matter of taste.

In my opinion the weight is relatively irrelevant for both machines. Both the Fitbit Versa 2 and the Fitbit Charge 3 have a very low weight.

GPS is a key difference between the Versa 2 and the Fitbit Charge 4, the Charge 4 has built-in GPS. The Fitbit Versa 2 only supports connected GPS. This means you are dependent on the connection to your smartphone. This sometimes leads to inaccuracies and disconnections during recording. In terms of GPS, the Fitbit Charge 4* has a clear advantage.
Battery life
In terms of battery life, Charge 4 is also ahead. The battery lasts up to 7 days. Battery life is up to 5 days for the Versa 2.

However, if the GPS is turned on for Charge 4, the battery life is reduced to up to 5 hours.

In general, the battery life of both devices decreases depending on the activity and use.

The menu navigation is already more pronounced with Charge 4. But the Versa 2 offers you even more. You can also install third-party apps with the Fitbit Versa 2. This is not possible with the Fitbit Charge 4.

In general, the Versa 2 gets more points for the smart functions. The Charge 3 also supports smart notifications and quick responses, but the Versa 2 offers more. With the Versa 2, you can also reply by voice mail and use Amazon Alexa.

With the Versa 2 you get an internal music memory and can store music directly on the clock. So you can listen to music even without your smartphone.

The Charge 4 has no memory built in. But the Fitbit Charge 4 also supports Spotify. But only Spotify can be controlled from your smartphone. This can also be done by the Versa 2.

Which Fitbit is better?

As a fitness tracker, I think the Fitbit Charge 4* makes a much better picture. It is compact, cheaper and has built-in GPS.

As Smartwatch the Versa 2* takes a better picture. You get more smart features, can listen to music directly over the clock and have the possibility to install apps.

Both devices are waterproof up to 50 meters. Both watches are also suitable for swimming and can record lanes.

For most people a combination of both devices would be a dream. If the Fitbit Charge 4 could still store and play music, it would be a dream. I am sure that this will be the next step. Alternatively, many people would certainly want a Versa with built-in GPS. The Versa 3 will have that 100% too. However, both products will still need something.

So, my recommendation for you:
You see, it depends on you. Feel free to leave me a comment and tell me what you decide.

Tags: ProduktvergleichVS, Fitbit, FitnessTracker The article is written by Lucas B and published on 07.04.2020.