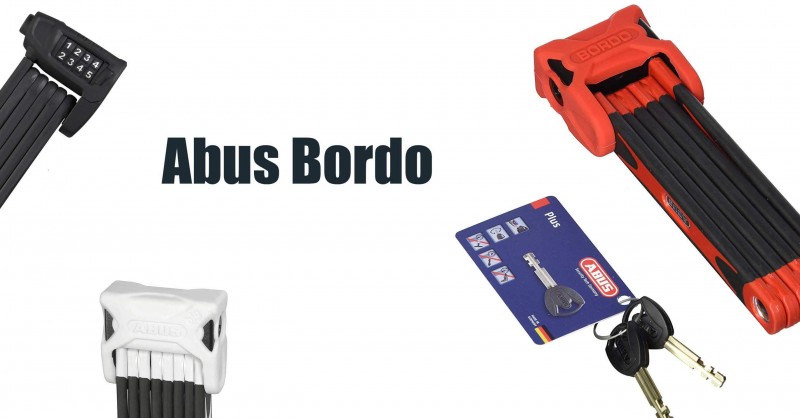 A good bicycle requires a high-quality bicycle lock. Abus is one of the big brands in this field. Many insurance companies even require special locks. Especially safe and recommended is the Abus Bordo, a folding lock with a high security standard. Here you can find the differences between the Abus Bordo bicycle locks.

Differences in folding locks for bicycles

When buying a folding lock, there are some differences you should be aware of. To help you decide which Abus Bordo to buy, I'll explain some important terms and characteristics about folding locks.

The bicycle lock with key wins

In general, bicycle locks differ between combination locks and locks with keys. This is also the case with the Abus Bordo. The manufacturer marks these models with the suffix Combo.

The advantage of a combination lock is that you do not have to carry a key with you. There is therefore no danger of misplacing the key. You can only forget the number code, which you can also write down. With a key this becomes difficult.

How long should the bicycle lock be?

At least 90 cm are recommended

The Bordo folding locks differ in position. If a lock is longer, it usually has several links. Conditionally, this factor also has an impact on safety.

More links in a lock also mean more weak points. Of greater importance, however, is the lever, which is given with a longer lock. If a lock is loose, thieves can use their tools to break the lock. They can also use the bicycle itself as a lever to pick the lock. Therefore it is advisable not to buy a longer folding lock than you really need.

Folding locks generally limit your flexibility, but offer a higher standard of security. You should definitely take this into account when buying your lock. If the lock is too short, you will not be able to chain your bike to some extent. For enough freedom I recommend at least 90 cm. Personally, I have only rarely reached my limits here.

A disadvantage of the longer locks is the slightly higher weight. More material means of course also more mass and therefore more weight. Also, longer folding locks are of course a bit bigger and more bulky.

#The manufacturer Abus always mentions the weight of his bicycle locks. Of course the question is for what and to what extent this is relevant for the purchase decision.

Cycling is also about lightness on the bike. The more weight that has to be transported, the more power has to be mobilised. Therefore the weight of Abus is given. Whereby one should always consider at this point what type of cyclist one is. Especially in the field of racing bikes the weight is much more relevant. For most hobby cyclists, however, a little extra weight is not necessarily the biggest problem.

Genrell a good bicycle lock should bring some weight with it. The weight of a bicycle lock speaks for the stability and security of your lock. This point is also reflected in the number of "Security Level Bike" from Abus.

The Security Level Bike: The higher the better

#Abus has an item called the "Security Level Bike". This gives information about the security level of the bicycle locks.

There is a scale from 1 to 15 where 15 is the best value. Thus, an Abus bicycle lock with the value 10 is more secure than a lock with the value 6. For a long time the maximum value was 10, which is why the term "maximum level 10" can be found on some pictures.

Combo, Lite, Big & XPlus? What does that mean?

When comparing the Abus Bordo bicycle locks, the terms Combo, Lite, Big and XPlus quickly stand out. These are not freely chosen, but say something about the characteristics of the locks. Briefly and clearly explained in the table:

The addition Combo is easy to understand. This describes that it is a combination lock. I therefore recommend locks without the term combo in the designation.

Lite are extra light and compact variants of the Abus bicycle locks. Here you save weight, but you also lose security. The weight says something about the quality of a bicycle lock.

Big refers primarily to the length of the folding lock. In most cases, big can be equated with the addition 120. This is the case with Abus Bordo 6000/120*. This is also the length, which is 120 cm. A longer lock also weighs more. So you have to accept a bit more weight.

XPlus is a special series from Abus. It is the security model and comes with a "Security Level Bike" of 15. Here the locking system is specially secured and protects more against manipulation. The disadvantage of this model is that it is shorter and heavier. In the length there is the Abus Bordo XPlus* with 85 cm. It has a weight of 1760 grams. The model is also common under the number 6500.

Which is the best Abus Bordo folding lock for you?

Finally, the question arises which model of Abus Bordo is the right one for your bike. I recommend the Abus Bordo 6000/90*, which I bought myself. Reason and decisive criteria are:

You can also grab the Abus Bordo 6000/120 big* which has a length of 120 cm. The longer version gives you a little more freedom to lock your bike safely. However, the model also has a higher weight of 1420 grams. Logical, because it is simply bigger. To have an idea of it you can take a folding rule as a yardstick.